Everything Under, Daisy Johnson 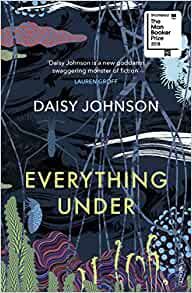 A slim book with a story as dense as the weeds clogging the riverbed, and as clear as the current rushing over them. Everything Under is a classical tale set in and around contemporary Oxford, but the rural settings give it a pastoral quality while the humans living in Johnson’s story, unrefined and often grotesque, bring a medieval, certainly pre-Industrial atmosphere to the whole. All this mixing of time and space - and my mixing in my efforts to describe - points to the very special thing created here, which is a story blessed with timelessness.

Gretel is searching for her mother, who abandoned her sixteen years earlier after bringing her up on a barge. When she finally finds her, Gretel discovers her mother is losing most of her memory, even her ability to play with words and create language, the skill which led her, despite her unconventional childhood and ending up in the care system, to a job at a dictionary, updating meanings.

Together they dance back and forth through time and memory to uncover the story of Marcus/Margot, who showed up one year by the river, and whose parents have been searching for ever since.

This is a book worth picking up just to read a page or two of Johnson’s rich language, but as a whole the story is expertly crafted, compelling and surprising until the end, vast and tragic.