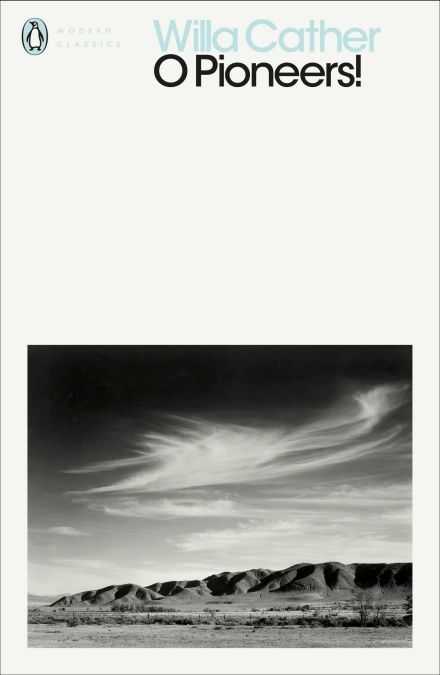 I found this book while I was walking around my local library (it’s at the end of my road and I started using it with my toddler). I was looking for short books while panicking I would never complete this challenge, and at a glance down the list of 52, twn books were chosen for their brevity, so I haven’t slacked off completely, though I have avoided longer books, and only read four over 400 pages.

This is probably a set text in many American schools, and I’m so happy to have found it. It is the first in Cather’s Great Plains trilogy, an ode, so says the marketing spiel, to ‘the American Midwest and the immigrants who transformed it’. These are Ben’s ancestors, who were literally pioneers in Montana, and the work does not look like fun.

O Pioneers was written in 1913 and its story begins thirty years earlier, when a Swedish family working the Nebraskan prairie lose their father who has worked for more than a decade to get a foothold in the harsh land. Like other from Europe, he arrived with no farming knowledge, so success seems more or less based on who can hack it out, through luck and learning, before their money runs out and they have to take a job in town. The Bergsons are lucky; the father entrusts his farm to his daughter Alexandra instead of his feckless sons, and she makes a huge success of what they have, understanding the value in land if it can be exploited – the story of America.

Their neighbours are French, Norwegian and Bohemian. The cultures mix and their differences are explored, but it’s a much happier story of multiculturalism than modern day America tells. Everyone shares the spirit of opportunity, even though it treats many of its players harshly: the poor lose out, the physical toll of the life is immense, the puritanical rules from the old country persist. Therefore the human and personal cost endured by Alexandra and those close to her is tragic.

The story is so tragic that I cannot imagine how it continues into another chapter, but I will hunt them down and read them.