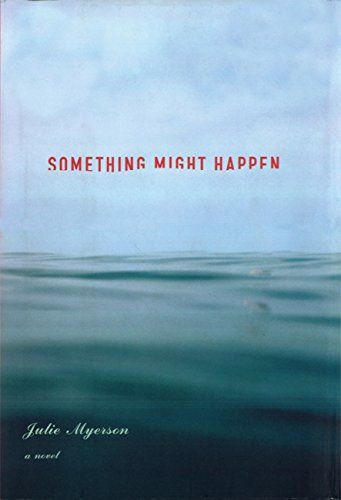 I’ve always wondered what Julie Myerson’s books are like, but only because she’s so controversial a figure in the north London media gossip scene for writing about her children often and openly, in a long-running Guardian column and a non-fiction book about her eldest son’s cannabis addiction.

I didn’t know what any of them were called though, so assumed they weren’t great, or that her infamy overshadowed them. I came across Something Might Happen (2003) on holiday, in a worn paperback edition. The book begins with a murder, as so many books do. It is a brutal one. Myerson then unpicks, cleverly and gently, the actions and feelings of the husband, best friend, lover and children left behind, the pain they go through as devastating as the original act.

What happens? They try and get through each day. In terms of plot, Myerson has constructed a sophisticated tale upon the flimsiest of foundations, but she succeeds because the story is touching and, let’s face it, could happen to any of us. Although the murder is horrific, as the book unfolds we experience a tenseness to match any thriller, but not the expected revelations. This made the book somewhat unsatisfying at the end, but also projected a kind of truth about grief and about events with no explanation: the thing cannot be solved, and it will not go away, it can only be lived with, and endured. There is no closure for anyone.

I was doing my postgrad and not following fiction releases when this book came out, so I don’t know what, if any, sort of fanfare it received, but I feel there are many writers of Myerson’s remarkable calibre who are thought of as women who write about family and domestic issues, and whose books would have been sold very differently under a man’s name.