Such a Fun Age, Kiley Reid 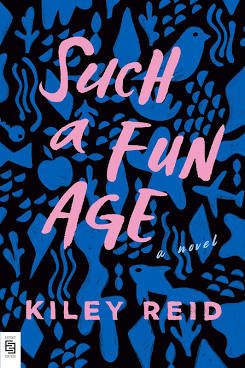 It is easy to say that one book or another should be on school curriculums. Any book worth reading has something to teach others. But Such a Fun Age, a debut by American writer Kiley Reid, has the potential to teach an awful lot to many people. Plus it’s a brilliant story which picks up tropes of contemporary life such as manipulating social media for personal and professional aims, and exposes their fragility alongside timeworn issues like exploitation in the care sector. All this is headlined by the foremost issue of racism: casual, institutional, historic, Reid shows us its many ugly faces.

Reid’s 25-year-old protagonist Emira isn’t sure what she’ll do with her life. She is babysitting in Philadelphia and hanging out with her college friends who after graduation are pursuing careers and earning more than she is. She enjoys looking after her charge, the toddler Briar. But when her bosses, Alix and Peter, call her away from a night out to kill time with Briar in a high-end supermarket, while they deal with an incident at home, Emira is detained by security and accused of kidnapping. Emira is black and in her going out clothes. Briar is a cute white infant.

The two people most shocked at this event are Alix and a man named Kelley who was shopping and filmed the incident. Alix, 32, has just decamped from New York to her home city of Philadelphia. She’s vulnerable and desperate to fulfil a book deal. She can’t lose her babysitter over this. Kelley encourages Emira to publicise the clip. She doesn’t want to, but the pair end up in a relationship.

Alix and Kelley are both white. They both want to ‘help’ Emira. They both think they know how to help her, but as they do so their various strands of racism come to the fore. Though Such a Fun Age is sold on the initial shocking racist incident in the supermarket, really this is only one event which nudges all the rest into view. It’s not even the first, as Alix and Peter called Emira that night after Peter had made an on screen gaffe in his broadcast news job. Can I call it a ‘gaffe’ though, as it was a racially charged comment which came out of a powerful white man’s unthinking mouth.

Reid exposes so many levels of inbuilt racism in her story, which is also funny, pacey and poignant. The twists and turns are clever and oh so believable because they’re happening around us, all the time. This is excellent book club material for anyone who might resist being schooled in anti-racism, as well as ideal for teenagers in school, as well as a damn good read.

Parts of Alix are really hard to take. She developed her brand from letter writing, which she began in order to blag products for non-existent events. As a journalist I’ve received many a fancy treat – unsolicited – for things I never wrote about. I have twice solicited items which I’ve felt really filthy about afterwards, even though they were inconsequential and mostly nobody would have thought of it as blagging. But what Alix is doing is actual fraud, and she is celebrated for it. Comparing how easy it is for her to develop a career based on nothing with Emira’s situation is clever, but despite her privilege Alix is also sharp and hard-working. She can be fun, too, and once she leaves NYC some of her alpha tendencies slip and she binges on shit TV and allows herself to put on a little weight.

I struggle with the idea she doesn’t care for her children enough. She has two children who she mostly cares for herself, breast-feeding for years. Yes, she exploits them to make her look like a woman who can ‘do-it-all’, but she is mostly doing it all, with a part-time babysitter to help. The idea that a woman who pays someone else to care for their child for 10 or 30 hours a week is not also caring for them herself is nonsense. No judgement is ever laid at her husband’s feet for not doing his bit. But this is through Emira’s eyes, and she is young, quite immature, and mostly focused, rightly, on the toddler she is paid poorly to care for. Perhaps Emira looks only to Alix as a parent because Alix hired her. Certainly I lay this short sightedness at Emira rather than Reid’s door. And I wonder what it says about my white woman feminism, because I can’t work it out but it’s probably very clear to others. Probably the fact I am bothered by this part shows where my concerns lie. I don’t have to level my conscience with the fact that when I employ childcare in the UK, they might not have access to healthcare. Anyway Peter gets away with the typical Dad excuse, as some sweet, somewhat bumbling character in the background. I find him pretty sweet and likeable too, as my blood boils.

This isn’t the issue at stake here. It’s one of the things a white woman can be pissed off about because she’s not being held up at her local supermarket. Reid smartly skewers so many small but significant idiosyncrasies of racism and race and power relations, tracing a line from employing black domestic staff today back to slavery.

For me Kelley is the most brilliant character. What a difficult set of contradictions to portray. What should we feel about him? Can we give him a free pass or is he the one who deserves to be exposed? You should read Such a Fun Age to find out, and tell all your friends, and your parents, to read it too.