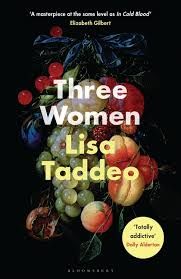 I’ve learnt a lot about how books are marketed since starting to write my own fiction and write these reviews. Mostly though I’ve learnt about it through Twitter, seeing how other books do and who’s talking about what.

I used to write lots of short book reviews for The Independent but it’s been years since I did, and I’m now writing a few things for The i Paper again. I try not to be 100% cynical in my approach to life but I do have a more sly appreciation of how books are publicised and sold – it’s easy to see how okay-ish books do spectacularly well.

When everyone was talking about Three Women, a non-fiction account of the intimate lives of three American women – intimate as in sex and love and everything in between – I was careful not to get too excited about the praise shooting for it from every angle. Still, I ordered it to arrive on publication day, and I read it in three or four days.

It is spine-straighteningly special. The stories of Lina, Maggie and Sloane are gripping, heartbreaking and alarmingly original, despite the fact this is a work of non fiction and all three are recognisable as ‘ordinary’ 21st century women.

The poetry of Taddeo’s prose never misses a beat as she leads us through the daily lives, and the adolescences, that bring her three women to where they now exist, these women who want their husbands to listen to them, to respect them and to desire them.

Taddeo spent eight years researching the book, even moving to live near some of her subjects. She began by following more women but a number dropped out as the magnitude of the project became evident. The conscientious application to detail is reminiscent of New Journalism, and she has been compared to Truman Capote. To me nothing about Three Women feels unkind, voyeuristic or manipulative, but probably others feel differently. I feel like they are complicit in the book as much they are in their lives, and that Taddeo sacrificed as much as they did to get the story out.

It’s not a spoiler to tell you that these women do not have straightforward interior lives. Taddeo presents their actions through a sharply focused lens but with the flat hand of no judgement, even when it comes to the parts we are so obviously going to sob over. I’m not sure how she kept her editor hanging for almost a decade while she got this right, but that commitment to rigour is inspiring and important when slapdash and good-enough are too often seen as acceptable.

READ THIS BOOK. If you’re a man, even better.