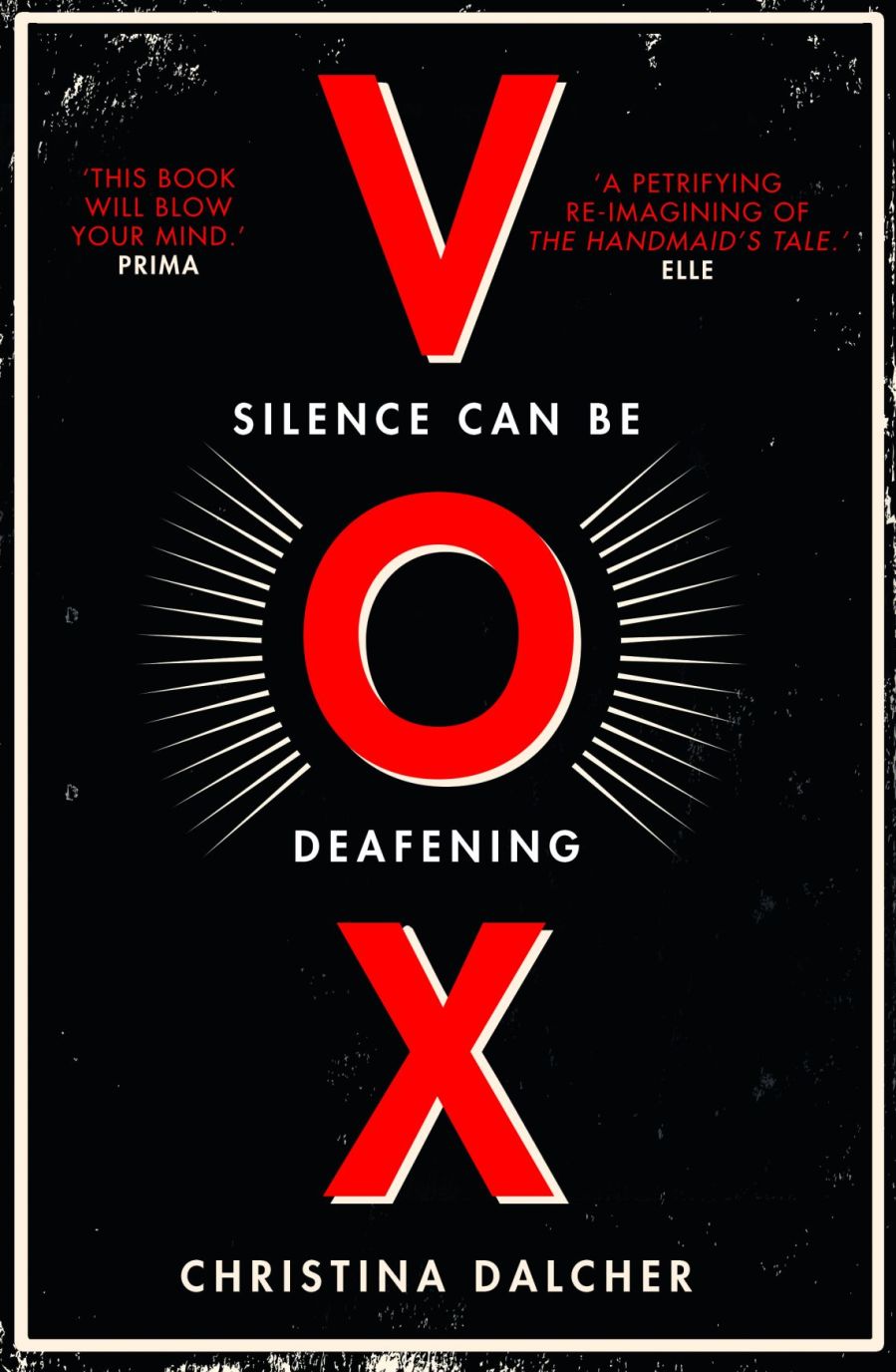 I love the premise of this book. It’s a proper Handmaid’s Tale-esque dystopian thriller, in which all the women in America have had their voices taken away – they are forbidden to speak more than 100 words a day – and our narrator is a talented scientist who realises she has made a huge mistake by keeping quiet while a violent, fascist regime came to power. She is Vox’s Serena Joy, who chose the path of appeasement to protect herself and her family, but when she gets the opportunity to redress the balance, she goes for it.

The female characters all wear ‘counters’ or ‘bracelets’, which begin to emit electric shocks once the daily word limit is reached. In many ways, Vox successfully explores what language gives us, and what losing it takes away. The theory is that within a generation or two of women who cannot speak, they will all become naturally submissive, and the violent checks and punishments will be removed.

The narrator Jean McLellan is a neurolinguist who was working on a cure for stroke-induced aphasia when the current president came to power and banned women from working a year earlier. Her husband Patrick is now the president’s science advisor, while her eldest son Steven is a committed member of the new ‘Pure’ brigade. Her five-year-old daughter Sonia is unlikely to ever learn to speak when her school gives out prizes to the girl who utters the fewest words each week. Jean had been close to a cure for the memory loss when she was forced to give up work, and when the government gives her the opportunity to start again to help them, she accepts.

Vox is a page turner. It has a likeable and honest protagonist in Jean, who realises she could have – and should have – made an effort to campaign against this new president when she had the chance. I feel her character could have been explored in a closer and more sensitive way. If she has always hated the regime, wouldn’t she have been more outspoken? How would her husband have reached a position so close to the president? When she hears of the idea there is a resistance, she is surprised. But there is always resistance. The timeframe also feels a little shonky. I accept much of the world-building early on, mostly because I want to, but the idea that in a single year all women would be at home wearing metal counters is far-fetched. However, the analysis of language and its power could have been dragged into an inaccessible highbrow arena, and Dalcher makes it punchy, readable, and though-provoking. And besides, the technology for this is already in all of our pockets.

Vox is still in hardback but you can buy it from Hive for £10.69