We Are All Completely Beside Ourselves, Karen Joy Fowler 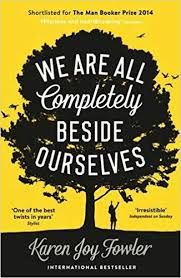 This book has been on my bookshelf since it came out in paperback in 2014. There’s no reason I haven’t read it, only that my endless magpie purchasing and borrowing of books outweighs the number which can ever possibly be read.

The narrator, a young American woman called Rosemary, tells us the story of her childhood. Bit by bit we’re taken back in time and uncover the awful truths which explain why her sister disappeared when they were children, and then her brother ran away and hasn’t been seen for years either. It’s hard to review this book without massive spoilers, so I’ll keep it simple.
It is a clever and dense book. The research into the scientists and families who were obsessed with studying chimps in the US in the twentieth century is fascinating and grotesque. It made me want to immediately watch every documentary made on that subject. The unflinching ego of Rosemary’s behavioural psychologist father, determined to pursue his research aims whatever the cost, is terrifying. If you think your parents didn’t treat you well, or fairly, in any respect, you need to read about Rosemary’s family.

For all the big issues – family relationships, animal welfare, psychological abuse – the style is sharp and irreverent. And I really enjoy a book which holds its hands up and waves at the reader saying, ‘Hi there! I’m a book! You’re reading me, and I’m in charge of how I reveal my story.’

Buy We Are All Completely Beside Ourselves by Karen Joy Fowler for £6.99 or come by and borrow my copy