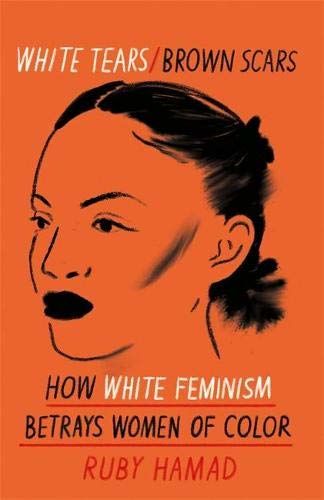 White Tears, Brown Scars has radically changed how I think about female identity, showing me a new yet entirely logical framework for how the idea of women - white women and brown women - was constructed as a key pillar of colonialism.

It has had a more profound effect on how I think about Empire and its influence on female identity than anything I’ve read. Its premise, which spun the book out of a Guardian essay, is that when white women cry during interactions with people of colour and specifically women of colour, it isn’t from fear but a display of power. What’s more, says author and academic Ruby Hamad, white women know exactly what they’re doing.

I read the book as part of the Everyday Racism book club, and talked about it for weeks afterwards.
I find it hard to agree wholly with the second part of Hamad’s premise, which is that white women know exactly what we’re doing when we turn on the tears. But I guess I would find that hard to swallow. Surely some women do know how they can wield this power, surely others don’t. Ignorance isn’t a defence but it is an explanation and can lead to co-operation and greater understanding. But yes sure it’s super easy for me to say this as a white woman who hasn’t devoted enough time to exploring the power dynamics of intersectional feminism.

Hamad’s book is about intersectionality but takes us through the history, to show how this isn’t some newfangled Feminism 7.0 attempt to rebrand the cause. She demonstrates how we can’t advance any of the feminist project without accounting for the many and complex situations of all women. She shows how the needs of women of colour have been undermined if not obliterated while white women claw to the top.

For me it gave me time to reflect on these many female identities as products not of race or religion or culture but of colonialism, defined to serve a variety of shifting ends. Where white women were pious and precious, at risk from black male aggressors (despite a lack of concrete evidence to support this), Asian woman were - and are - at turns easy to seduce or the seducers themselves. Wily temptress or naive temptation. Dumb or scheming. The assigned sexual characteristics flip flop depending on need, where the white woman gains an education and makes progress. Hamad takes us very quickly through the history of this and her case is to me convincing and plausible.

As I read I found some answers as to why women and girls from the global south tend to be in far less powerful positions in their homes and societies than women and girls in developed nations. Why are they more prone to subjugation? More religious? More domestic? Are they all of these things, or is this yet another mirage, presenting tens of millions of Arab, Asian and African woman as not yet ready to join the platform of the white feminist, where fights for jobs on the board and shared parental leave have taken over from the right to choose a husband or divorce or own your own business or be gay.

And yet and yet….and this is the piece I’ve missed out before….before Empire, women everywhere were in the same position. Subjugated skivvies the lot of us. It was education, relative freedom, a move towards equality that brought us the financial, personal and sexual freedoms we enjoy today. Paid for by the capitalism that was paid for by Empire that could only come about through the exploitation of people, minds and resources elsewhere.

I’m happy for the privileges I have. Sort of. I’m disgusted by how they were achieved, and certain a more equitable modern life for all could have been reached with a different approach.