Bringing out the wild in my child

Rather than trying to keep them quiet, should we let our children roar? By Sophie Morris 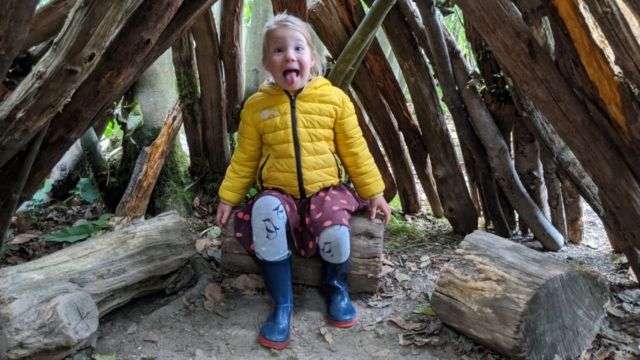 I try, and mostly succeed, not to shout at my daughter. But recently I’ve started shouting with her. Sometimes we really go for it, yelping and howling and hoping the neighbours don’t call social services. We also throw ourselves around her room for up to an hour before bedtime; dancing, spinning and jumping on the bed.

In the past few weeks we’ve had some help from a new picture book. Howl by Kat Patrick is a modern-day Where the Wild Things Are for frustrated children. Protagonist Maggie fights the annoyances of daily life with wolfish thoughts and howls at the moon. I love the impish characterisation of a little girl exploring her own anger and the boundaries of her world.

But the reason it chimes so resoundingly is that Maggie’s mother gets to let out her feral side too. Together they sniff magic on the evening breeze and imagine their biggest feelings flying off into the sky. “Self-expression is agency,” says Patrick. “There’s so much going on you’re not able to put language to, and sometimes you need a bit of a scream and a howl.”

Throwing yourself around at home to burn off energy and anxiety sounds far less wacky than it might have done a year ago. We’ve been working on this evening routine with the support of a sleep therapist - the first “help” I’ve ever called in - who thinks Percy, who’s four, isn’t able to settle in her own bed because her emotional needs aren’t met during the day. In short, she needs to let it all out, and then some, if my husband and I are to have a hope in hell of any uninterrupted sleep.

I don’t mind having a cuddle with her after dark. In fact it’s lovely to hear the sound of her breath by my pillow and feel her little hand grasping for mine. Many younger children showed some behavioural changes last spring, unable to understand or articulate the shift in their lives, but well able to feel it in themselves. Percy was back in our bed but her needs were intense and specific, waking me frequently to ask me to cuddle her tighter, or lying on top of me, smothering my face with her own. Wouldn’t she be happier if, when waking at night, she felt safe enough to settle herself ?

On several recommendations, we contact Ann Caird of Nurturing Sleep, a baby and child sleep consultant. After filling in a lengthy questionnaire, we have a two-hour video call and she sends us extensive notes and ideas, including lots to watch and read, plus a sleep strategy tailored to Percy. An outlay I was nervous about feels great value for £99. Her suggestion of a wild and active night-time routine is in direct contrast to the several hours we usually spend trying to create a calm evening environment. “Settling and sleep will be supported if the evening energy is used positively to prepare Percy’s body for sleep, as well as to enhance emotional safety, by using connection play,” she explains.

This is where I started to feel a bit rubbish. Have I not been connecting with my daughter when we are stuck in the house together 24/7? I joke that she is my limpet. She loves this and finds one on the beach for me with a hole through its shell, to wear around my neck. For most of most days we are physically connected in some way, but apparently I’m not meeting her emotional needs.

Caird asks us how we deal with disagreements or upset during the day, and my husband and I both say we try our best to stop Percy from having a meltdown. We don’t give in to her every demand, but deploy a careful blend of distraction and soothing techniques to stem fullblown bouts of crying. Because, quite literally, we don’t want to hear it.

“Our aim is to support Percy in effectively releasing emotional tension and frustration during the day so it doesn’t flow into bedtime settling and disturb sleep so much,” says Caird. “The main message here is that Percy needs to cry and really release her tension and anxieties from the bottom of her boots!”

This niggles at something which is at the back of my mind every time I wish my daughter would quieten down. Women are always being told to shut up. Little girls are rarely permitted the space for self-expression, to be wild and wolfish. Patrick tells me an early inspiration for the book was found in Anne Carson’s essay “The Gender of

Sound”, which describes numerous instances in Greek mythology in which sounds made by women are characterised as awful and wild, “an otherworldly echo of women shrieking in the wolfthickets”, and women were even banned from singing their funeral lament. “Why is female sound bad to hear?” asks Carson. “Putting a door on the female mouth has been an important part of patriarchal culture from antiquity to the present day.”

I need to keep this in mind whenever Percy asks her 300th question of the morning. Caird advises us to support her through any upset, guidance echoed in Philippa Perry’s hit parenting book The Book You Wish Your Parents Had Read (And Your Children Will Be Glad That You Did). You’re more likely to get through to a child with soothing and sympathy over scolding. And Howl is a timely reminder that most of us are overdue a good wail in the moonlight.

The truth is, we don’t need to encourage wildness in children, we need to stop ourselves from holding it back. But it’s one thing to let them run wild in woodland, quite another when you’re in a quiet public space like a café. This is the rub between freerange and helicopter parenting - you can’t pick and choose between one and the other to suit your own diary.

But the logic goes that if you help your child to think their “wolfish thoughts” whenever possible, they will learn to understand in which situations it is - or isn’t - appropriate to howl at the moon. Good luck!

Get going first thing Shaking off anything that happened during the night, such as bad dreams, is a great way to start the day. If stuck for ideas, the “Hokey Cokey” will get the whole body going. Make some noise Gather up toy instruments such as drums, maracas, recorders and xylophones, or improvise with pots, pans, and help your child make as much noise as they feel like. Limber up Teach your child to explore the sounds they can make themselves. Can they snap their fingers? Slap their knees? Click their tongue? Pop a cheek with a finger? Get dirty Mud kitchens are hugely popular set-ups for young children, but there are natural (and free) mud kitchens all around us. Next time your child sits down or falls over, take a seat next to them on the squelchy earth. Explore it with your hands, picking up interesting sticks, leaves and bugs, and squeezing it through your fingers.