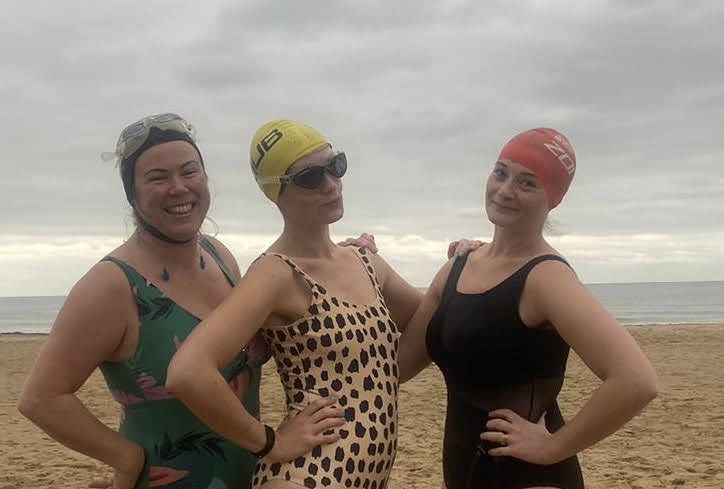 Around midday on 1 January 2019 I jumped into Margate’s Walpole Bay tidal pool feet first. In my few seconds below the surface, I felt the water rush into me as if I were inhaling its savage chill. As a child I’d swim off Anglesey from Easter onwards, but submerging myself into a glacial pool of five or six degrees was a startling new sensation.

My eye sockets were ablaze with cold. I could feel the bones in my ankles scratching around in shock. My nipples were so numb I wondered if they’d dropped off.

I came up screeching for air like an extra from Titanic. My breathing was uncomfortably rapid and my chest pumped in and out.

I assured Lisa, the friend who’d held my hand to get me this far, that I was “fine, absolutely fine, just loving it”, and splashed towards the shore where my exit over the sharp rocks of the shallows was even less dignified than my jump in.

But I didn’t care, not one bit. My mind had sprung open, my spirit was animated. Every screaming pore of my bright red skin fell to cheerleading this natural high to kick off the year. After a long, hot shower I was exhausted for most of the day but alert and excited.

A study suggested yesterday that cold-water swimming may help protect against dementia and other degenerative diseases, following the discovery of a “cold-shock” protein in the blood of regular swimmers at the Parliament Hill Lido in London.

Although doctors have known for many years that cooling people down can help to protect our brains, for example in people with head injuries, this finding is a world first. It is early days but the researchers from Cambridge University hope it can lead to new drugs to pause or slow down mental declines from dementia.

At 40 I’m not yet overly worried about dementia. It’s the immediate benefits that have sucked me in since that bravery on that New Year’s Day.

I’d wanted to dive into a cold, dark sea for months, to explore its icy belly and inhale a rich draft of the after effects extolled by cold water acolytes. I am intolerant (moany) about cold weather and wanted to toughen up. I had just about survived moving my family to a new town on the Kent coast and needed to reboot.

I’d been aware of the growing popularity of outdoor swimming, but I wondered how many more articles and books the universe needed on the subject. I have now converted to full proselytising mode.

I didn’t swim again until the spring but from then on I got in every week, spending longer in the water as my tolerance and the weather improved.

By the winter I was happy to swim as the temperature dropped, helped by the temporary sauna on Margate Main Sands, constructed by local skincare company Haeckels to encourage people to enjoy the benefits of sea bathing.

It’s a now a huge part of my life. There’s the anticipation of meeting friends and exposing limbs to the raw air; in years like 2020 this alone is a worthy reminder you’re alive. There’s the smoulder of danger in the air as I skip down the sea wall, slick with seaweed.

I took a selfie at the sauna on 12 March, aware it would be the last time I huddled in a sweaty space with strangers for a long while. I was back in the sea as soon as regulations relaxed but worried about other swimmers stuck on land while pools remained closed.

By June a dark thought emerged. I am a beach and sun lover and get more than my fair share of vitamin D, but I missed the cold water. I wasn’t looking forward to winter, but I couldn’t wait to embrace the chilling tentacles of a November sea.

It is believed cold-water swimming can help with anxiety, depression and stress because as you acclimatise to the temperature your body gets used to dealing with the shock. For me the benefits pivot around the truth of the cold dip. The frisson of the deep swell, the brisk slap of a strong current, the biting risk of the ocean, all of it a complete affront to the daily grind, with no pharmaceutical comedown or expensive subscription requirements.

That’s not to say there isn’t kit to throw cash at: goggles, watches, wetsuits, rash vests, neoprene socks, gloves and hats. I’ve even spent £150 on a special coat to get changed in. But I could lose all of these and hold on to my love of a polar paddle, and the sea will be waiting.