If you care about where your food comes from, it may be time to do the same for your clothes. Ignoring the environmental impact of what we wear is becoming harder. By Sophie Morris 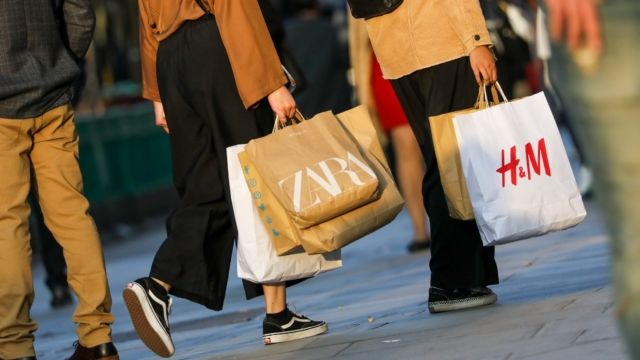 Consumers are increasingly concerned about where their clothes come from (Photo: Simon Dawson/Getty)

What’s wrong with fast fashion? Doesn’t it provide work in developing countries? Why shouldn’t I buy cotton from China? I’m not sure I have time to learn how to knit or sew, and I’m too busy to trawl eBay and Depop and charity shops for vintage gear. Anyway, I like new things. I don’t want to look like everyone else did last year. If any of this chimes with you, be warned: this could well be the decade when our conscience meets our insatiable consumerism, and makes an intervention.

Clothing: the new chicken
Slave labour in distant sweatshops has been an inconvenient truth that shoppers have ducked for years. But the full cost of our obsession with new clothes is even greater than unregulated factories - and we’re finding out more about it all the time. From the water it uses and pollutes, to the agricultural workers poisoned by fertilisers or driven to suicide through spiralling debts, fashion is a really filthy business. It accounts for a huge proportion of total global emissions - about 8 per cent.

Most of this, more than two thirds, occurs right at the beginning of the supply chain. To produce fabric or a finished garment, we must first grow the fibres. Cotton and flax are crops, just like those we grow to eat. According to the WRAP charity, we throw away £140m worth of wearable clothes each year, and demand for raw materials is set to triple by 2050. If you’re someone who’s comfortable asking hard questions about where your food comes from, consider clothing the new chicken.

Synthetic fibres are also extracted from the earth. Rayon is made from wood pulp. Nylon comes from petrochemicals. “Thinking about the fibre is a really big question”, says Sofi Thanhauser, author of Worn: A People’s History of Clothing (Allen Lane, £20). “With food we think all the way back to the animal, not just how it’s going in the kitchen.”

Thanhauser has bought only three new items of clothing in the past year. Before any purchase, she does extensive homework, finding out who is making the garment, how, and where the materials are sourced. In Worn, she quotes a US ad copywriter from the 1920s, when the fantasy of affordable ready-to-wear clothing was taking off. Helen Woodward instructed her staff: “Never see the factory in which it was made? don’t watch the people at work? Because, you see, when you know the truth about anything, the real, inner truth, it is very hard to write the surface fluff that sells it.”

We are all inundated with this “surface fluff” daily. How to cut through it, when even the messages around “sustainable”, “ethical” or “planet-friendly” clothing are confusing, sometimes contradictory, and often outright lies?

Thanhauser is reluctant to become any sort of role model for making the right choices. “I am wary of giving lectures to people on what to buy or not buy,” she says. “I don’t want to make it more difficult for people - especially women - to get dressed in the morning. But I do think making complicated structures and systems more legible is an important part of the work that needs to be done, and so is putting pressure on those systems.”

Cotton conundrum
“I don’t actually know if making good clothing is compatible with making any profit,” Thanhauser admits, remembering an early encounter with the industry. It was 2012 and, prompted by news of crowd rapes in Egypt’s Tahrir Square, the author made her own slogan-carrying top from an old T-shirt, calling for “Matriarchy Now”. The idea went viral on the feminist campaigning scene. Pussy Riot activist Nadya Tolokonnikova and artist AL Steiner were pictured wearing her T-shirts.

But she was left with a dilemma.

How could she commercially produce an item of clothing based on cotton, a fabric that is only so widespread and cheap because of its legacy of slavery, exploitation, civil war, empire and the sustained degradation of land and other natural resources, along with the farmers trying to subsist off that land? Very quickly, Thanhauser saw that this was much more than a slogan T-shirt, no matter its punchy wording.

She could distance herself from producing the tops, but the problem with clothing, as with food, is that you can’t give it up entirely. You can forego Primark and Boohoo or choose not to wear leather or buy brand new, but even the most ethically minded human can’t choose to stop wearing clothes altogether. Even if you’re a fan of your birthday suit, it’s not appropriate for popping to the corner shop. And boy, it’s cold out there.

Human wrongs
A decade on from Matriarchy Now, Worn tells the story of who we are through what we wear. How did we travel so far from where, and how, our clothes are made? My grandmother worked in a Lancashire mill. I went to university and cannot sew on a button. Thanhauser follows a thread from the cotton fields of the southern US states to the mills of north-west England, via the stories of struggling Indian farmers, the flamboyant court of Louis XIV - who engineered France into the fashion capital of the world - and, tragically, how cotton grown and processed in

Xinjiang, China, is woven into the industry, wherever you are.

According to the campaign group End Uighur Forced Labour, one in five of all cotton garments in the global clothing market are tainted with forced labour from the region. Late last year, the Foreign Affairs Committee of MPs published “Never Again”, a damning report on activities in the province, recommending that the UK Government should declare the treatment of Uighur Muslims in Xinjiang a genocide and ban all cotton imports from the region, as well as a ministerial boycott of the 2022 Beijing Winter Olympics.

Tech support
Google recently unveiled the Global Fibre Impact Explorer (GFIE), a cloud-based tool allowing anyone in the trade to get a clearer picture of where their fabrics are coming from. Brands, designers and factory owners can assess environmental risk across air pollution, biodiversity, climate, emissions, forestry and water use. Google has worked with WWF to gather data from all over the world, and tech agency Beyond has translated this into a very smart tool which, it is hoped, will inform future sourcing behaviour across the industry.

During a pilot, GFIE helped to show Stella McCartney how to improve cotton sourcing in Turkey, not by abandoning the region, but by investing in local regenerative farming. Throughout 2022, the Textile Exchange nonprofit organisation will be inviting brands to try out GFIE.

Reduce, reuse, recycle What can we do? While a Chinese boycott appears too far for Downing Street, it is well known that Carrie Johnson wore a hired dress for her wedding to the Prime Minister. Renting clothes is a modish and commendable activity. It’s not the solution, but it is a start. There are a number of websites that rent out clothes by the item, or you can subscribe to borrow a few pieces each month. Try Hurr, On Loan and My Wardrobe HQ.

There are a great many clothing brands which state that they are using recycled materials. As with the rest of the industry, it can be tricky to decipher who’s getting it right. More and more brands are championing the transformation of plastic bottles into clothing, for example. Big retailers such as Nike, H&M, Primark and Zara all rely on single-use bottles to produce polyester. But a recent report from the Changing Markets Foundation and the environmental organisation City to Sea called out this practice as “greenwashing”. According to a spokesperson: “With their carefully marketed green credentials unravelling fast, brands are clinging to recycled bottles for clothes to distract consumers from their inherently unsustainable reliance on fossil fuels for fibre.”

In an email sent the day after we spoke, Thanhauser tells me: “There was a rash of articles recently with headlines like: ‘Will Gen Z ever give up its dangerous love of fast fashion?’

Choose independent Smaller brands are often more transparent. Rapanui is one example. It operates what it calls a circular economy, or “remill”. The company uses renewable energy to make clothes from organic cotton, and invites customers to return old clothing to be made new. It also owns Teemill, whose open-source production facility lets others create their own clothing brand. The focus here is on the waste. One hundred billion new pieces of clothing are produced each year. A truckload of clothing is burned or put to landfill every second.

Thanhauser believes the environmental dimension has broadened the debate. “I think clothing sometimes gets feminised, that people think it’s a thing girls should care about and read about,” she says. “The environment isn’t gendered in the same way. And a lot of the labour problems are elsewhere and don’t affect people in the UK or US. The environmental problems are more acute elsewhere, but they’re not going to stay elsewhere.”

‘I don’t make clothes to be worn just once’

Rachel Young, 39, set up her womenswear brand in 2020, just before the first lockdown. Staple Clothing is a line of dresses, jumpsuits, trousers and hoodies, handmade in Margate and designed to use up waste fabric.

I’m not someone who spends lots of time getting ready in the morning because life is quite busy. I wanted to keep getting dressed as simple as possible, to design clothes that I could put on in seconds and be done for the day. I don’t buy lots of clothes, either, and wear anything I have to death, so I didn’t want to make anything someone would wear once and throw away.

We make everything to order. I draw the designs and my friend Clare does the patterns and makes everything. I started the collection just before lockdown and when the factory I was going to use to dye the fabric shut, I ended up dyeing everything in the bath, with three children at home and my partner baking bread for his business in the garden.

Now I get 90 per cent of my material from a family-run business in Wales. It’s important to me to use everything. We make a multicolour collection from offcuts, quilted jackets from old blankets, and summer dresses from vintage bedsheets and old tablecloths. We might start making scrunchies from the really small pieces.

I like the fact I can provide employment locally, but I’m always adapting how I do things to make it viable. For example, we make to order, and people want to be sustainable, but also want the product the next day. I don’t want to price people out or disappoint them. I’m finding the balance.