Go plastic-free to save the oceans

To avoid becoming part of the Blue Planet’s environmental problems, take some plastic-saving tips from the experts 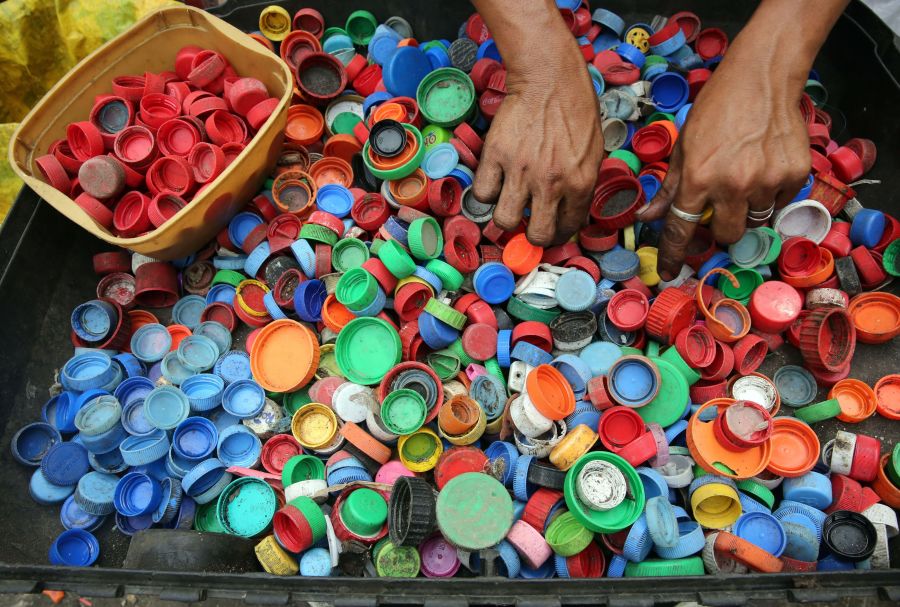 Just as it appears you can’t take a dip in the sea without encountering a plastic bottle or shopping bag these days, so it seems as if we can’t look at the news at the moment without another shocking statistic emerging about how our throwaway lifestyle is causing all this pollution.

If our current levels of pollution continue, the amount of plastic in the oceans around the world - which was brought home to many people last year by shocking scenes in David Attenborough’s Blue Planet II - will weigh more than all the fish by 2050.

Even when we put our plastic in a recycling bin, that doesn’t mean it won’t harm the environment. In 2014, 800,000 tonnes of plastic waste from Britain was sent abroad to be recycled, but reports suggest most of this ended up being burnt because it was contaminated.

The problem affects our waterways at home too. The River Tame, near Manchester, was recently revealed to have the highest level of microplastic pollution to be discovered so far anywhere in the world.

Now the Government has announced a plan to eliminate all avoidable plastic waste within 25 years - though environmentalists say this must be done quicker - and a consultation is being launched to consider actions such as a tax on coffee cups, crisp packets and chewing gum.

But our wasteful approach to the sorts of single-use plastic objects which become poisonous bird feed and turtle gallows in oceans far away can be redirected now, with very little effort - especially by taking the advice of experts like Tara Button.

She is the author of A Life Less Throwaway and founder of the smart consumer website BUYMEONCE.com. Button launched her site as a protest against throwaway culture in 2016, after a career in advertising exposed her to the dark truths of consumerism.

She has tried and tested many hundreds of products to present a range of the most durable items on the market, from toasters (Dualit) to children’s toys (Green Toys), tweezers (Pathfinder and Tweezerman) and laptops (Lenovo). “I’m very optimistic,” she says. “When people are given a good and an easy way to change, they will do it. Guilt doesn’t work.”

To beat single-use plastic offences, for example, Button recommends buying a metal travel mug to fill up in cafés and sandwich shops and carrying a titanium spork to eat with. Instead of plastic film, which isn’t recyclable, buy the brilliant bee’s wrap (see our shopping guide), a beeswax-coated cloth.

Our love of coffee creates 25,000 tons of waste from 2.5 billion coffee cups each year, but you’ll have noticed an increased interest in shoppers carrying around their own cups for hot drinks. Pret has knocked 50p off the price of any of its hot drinks for customers who bring their own cup. Until January it was 25p, in line with Starbucks, Costa and Paul, while Greggs offers a 20p discount and Nero rewards customers with extra loyalty stamps.

Straws have been drawing ire recently too, with dozens of bars and restaurants - including Fortnums, Pizza Express, Leon and Young’s pubs - banning the use of plastic straws and offering paper or reusable metal ones instead.

Supermarkets are a major offender. They might have got on board with the plastic bag ban - once the law forced them to in 2015 - but many food items are sold cloaked in layers of unnecessary plastic.

M&S has successfully redesigned much of its convenience food packaging to slash plasticuse, only to be called out for selling slices of plastic-wrapped cauliflower, and three apples in a tube.

Asda oddly stopped selling loose fruit and veg last summer, but then backtracked after customer anger. Aldi says it recycles 100 per cent of its cardboard and plastic. Waitrose says it has thinned plastic packaging on some products by 50 per cent.

All the major retailers have extensive plastic reduction policies in place, but Greenpeace UK has said that a more radical and comprehensive approach is required.

There has been some pushback against the wholesale shaming of plastic straws and ready-prepared foods packed in plastic, because these items can be integral to the independence of some disabled people, but that’s no excuse for anyone else.

Better-quality items tend to be more expensive up front but, according to Button, buying once can save three or four times over a lifetime, and the dependence on cheap plasticitems is damaging for people as well as for the environment, trapping them into a cycle of poverty where they will always buy cheap products that break easily.

“People need to say: ‘Bollocks to what other people think’,” says Button. “I’m going to bring in my Tupperware and my mug, and that’s the way I’m going to do things.

“They might look at you as if you’re a little bit mad, but it starts a conversation.”

How to reduce your plastic footprint

Invest in one or two of these single-use plastic hacks to improve your ecological footprint, or do it for free by reusing plastic packaging and carrying cutlery with you wherever you go.

Botanic Infuse water bottle, £12.99, waterbobble.uk The clever refillable plastic bottles from Bobble have a carbon filter built into the cap, which prevents you from drinking chlorine and other nasties.

With the Infuse model you can remove the filter from the cage and replace it with fruit, herbs or tea - anything you fancy to flavour your water.

Moskito menstrual cup, £17.99, BUYMEONCE.com Mooncup is the best-known menstrual cup on the market, but Tara Button has chosen Moskito as the most durable brand of reusable sanitary products. It’s made of medical-grade silicon, can be used for up to 12 hours, and won’t dry you out like a cotton tampon.

Turtle Bags string bag, £5, turtlebags.co.uk If your tote is always full to bursting at the checkout and you have to waste money and guilt on a plastic bag, you need a retro-style string bag which will hold all your groceries. This one comes in black or beige and will carry up to 40kg, if you’re up to the challenge.

Ladybird sandwich wrapper, £6.99, re-wrap-it.co.uk Instead of packing up sandwiches in wasteful clingfilm or foil, try a reusable wrapper which wipes clean and doubles up as a plate. ‘The Wrapper’ comes in many designs, including checks, spots, skulls and this cute ladybird print. I use a napkin or tea towel, which is cheaper and better for the environment than buying a new product, but doesn’t protect your sandwich the way these do.

Animal Crackers bunting, from £16.50 for five flags, huntingforbunting.co.uk Balloons are made of latex or rubber and are as dangerous to animals and oceans as plastic. Instead of decorating your house with disposable balloons next time you’re celebrating, invest in (or hire) cute patterned bunting. Hunting for Bunting also makes bespoke designs.

Bamboo brushes, although disposable, are at least biodegradable, and finally available at a mainstream retailer: you can find the Humble brush at Waitrose.

The company promises that for every brush sold, a child in need will also receive a brush or relevant oral care.

Delivery vegbox Avoid the supermarket packaging scandal by ordering a vegbox. There’s a box to suit everyone, from the £5 Morrison’s box, which doesn’t require a subscription, to established organic brand Riverford, and The Organic Pantry. I use Nethergong Nurseries, which sources produce from Canterbury and around East Kent, from £8.

William Morris Ecoffee cup £11.89, Amazon.co.uk Ecoffee makes its reusable cups from biodegradable bamboo. There’s a design to suit every mood, but choose once, and choose wisely.

Bee’s Wrap, £15 for 3-pack, thewisehouse.co.uk Hearing about Bee’s Wrap is one of those “eureka” moments for anyone wondering how they’d find a decent replacement for clingfilm.

It’s an organic muslin cloth coated in beeswax and oil, which will cover and protect all sorts of foods from bowls of leftover soup and stew to bits of fruit and cheese.