How do I teach my daughter about war?

Rolling news, social media and playground chat mean that our children are more aware of global events than ever before. And, says Sophie Morris, it’s our job to try to help them understand 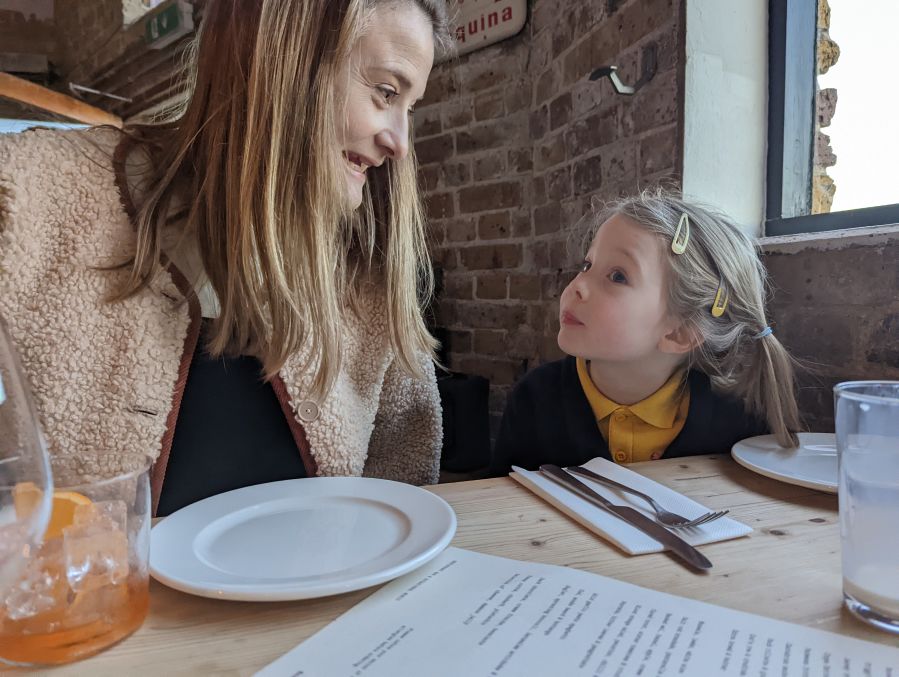 The email from my daughter’s school was brief and blunt. “As a school we have decided not to talk to the children about the events [in Ukraine].” It directed us to CBBC’s Newsround if we desired further support.

That morning, my not-quite-sixyear-old told me her friend had “seen the battle”. A few days earlier, she interrupted our Pokémon chat to ask whether I would “send her away”. “Away?” I asked, not immediately making the connection to the Russian invasion of Ukraine. She nodded. “Where will you send me, when you have to stay and fight?”

Unlikely scenes flashed before my eyes as I scrambled for something to say. I remembered Goodnight Mister Tom, Michelle Magorian’s 1981 children’s novel, in which I first read about wartime evacuations. And I pictured myself, hiding behind a filthy wall of sandbags, struggling to discharge a rifle.

We were rushing to school. I didn’t want to explode the critical relationship between Putin’s missile stock and his manhood any more than my daughter, Percy, wanted to be late. But the previous week I had found myself using the Trolls World Tour film as an analogy for the Second World War. She deserved better.

“Talking to young people and checking in on how they’re feeling is really important,” Sophia Ziff, an expert in student mental health, tells me a few days later. “But we always advise parents to consider what they want to say before they say it.

“Think about what you want your child to know, and what the point of the conversation is. Is it to talk about different values, about politics or to give reassurance? My top tip is to recognise that they have just lived through a very scary time with the pandemic. This fear response is heightened again with the war.”

I remember the moment I read about the first Gulf War, in 1990, clearly. I remember where I was, who I was with and the newspaper in which I read it. I was 10 and had little grasp of geography, never mind geopolitics. But I worried that Britain at war meant we would probably soon be living in a bomb shelter and arguing over rations. Maybe this is why I also remember what was in my picnic on that sunny August day.

Is honesty the best policy? I try not to lie to my daughter, but there are moments when honesty, providing comfort and pretending the world is made of candy floss all seem equally important. “I’d never leave you,” I blustered. “But what if you had to stay and fight?” my daughter persisted. “There’s plenty of space with Granny and Grandad up North,” I managed.

Maybe I would be better off, as her wise school suggested, turning to Newsround. I heard about Tiananmen Square and the siege of Sarajevo from John Craven and Krishnan Guru-Murthy and the much-loved show just turned 50.

Presenter Hayley Hassall joined the show in 2009 and has since had two children of her own, who are now in primary school. “Children have so many questions and are surrounded by a world of fake news,” she says. “They need a news programme they can trust.”

It’s Hayley’s responsibility to keep a cool head whatever the story, but she remembers reporting on the Manchester Arena attack as the toughest time of her career. “There were so many children affected, either from being at the event, or knowing friends who were,” she says. “It’s the first time that we’d talked about a terrorist attack on a place that was so close to children, but that’s when Newsround is needed the most.

“We made sure we told them the facts, as they unfolded, in the most reassuring way. Newsround also takes the wellbeing of children seriously, so there’s lots of advice and information on the website if any child is upset by the news they hear.”

As a journalism student in the early 2000s, I worked on a project to create a current affairs magazine for children. My group struggled to decide on the target audience. I said we should protect younger age groups from the grimmest truths of our world. A fellow student strongly disagreed. As a Catholic Palestinian from Jerusalem who also spent five years of her upbringing in the US, Margo Sabella-Marshall’s understanding of international relations was deeper than anything I’d absorbed in my Cheshire village. I don’t know what happened to the magazine, but it was a useful lesson for my embarrassingly naive mind.

“I think there’s always a way to tell children what’s happening in the world without scaring them,” says Hayley. “I’d rather my children hear it from me than in the playground. But it’s also important to tell them that these events are very rare. Give children the power to help if they want. My children and I have done a lot to raise funds, get donations and do everything we can as a family to help those in need in Ukraine.”

Today, Margo, now living near Edinburgh and mother to Natalie, seven, is finding the news “massively triggering”. “My husband wants to follow the rolling news coverage, but the air raid sirens bring back memories of the First Gulf War, when we were hiding in makeshift shelters in our own flats. They wouldn’t have protected us, but I think we were doing it to feel in control of our situation.”

She has, of course, noted the inconsistencies in how different conflicts are reported. Whether they are termed conflicts or occupations; how Ukrainians are cheered for violent resistance and Palestinians classed as terrorists. But she tries to keep things simple with her daughter.

“I encourage her to ask questions rather than feed her a certain narrative I think I’ve adopted the approach my parents had when we were in the US, which was to talk about their own experiences and memories and nostalgia, rather than bombard her.” But when Natalie came home from school one day and told her that Jerusalem was home to Muslims and Jews, Margo felt the need to set the record straight. “Jesus was born there!” she laughs.

Age-appropriate The 9pm watershed is almost 60 years old, but its application has evolved with culture and technology. There’s a general consensus that children under the age of 10 are the most vulnerable, and unsuitable content might include violence, sex, offensive language and material relating t o the use of drugs and stimulants.

But a key period for parental concern about media consumption is with children aged 10 to 14. This refers to all and any media, not news, but children don’t know the difference.

Broadcasters follow the Ofcom Broadcasting Code, which exists partly to protect under-18s from “material unsuitable for children”. All news outlets have their own editorial policy. Using graphic content, such as images of the dead or dying, is a highly sensitive issue during times of conflict and you are unlikely to see this before the watershed. Nonetheless, no one wishes to sanitise war.

Newspapers self-regulate by adhering to the Independent Press Standards Organisation’s (IPSO) Editors’ Code of Practice, which carries advice on how to report stories about children, but not to children. Newspapers are not, after all, designed with an underage audience in mind.

Social media is by no means unregulated, but children find their feeds interrupted with unsolicited news. “Young people are absorbing information and feelings about the conflict without actually consenting to do so,” says Ziff.

“Young people on TikTok and Instagram are scrolling through and seeing live events from Ukraine. Ask them how this makes them feel and discuss having a limit on social media time so they’re not engaging in content they’re not enjoying. Talk through the benefits, such as better sleep.”

We’re not nearly at the TikTok stage in our house. Can I prevent us ever getting there? The more I think about it, the more I want to introduce a “Julia Donaldson only” rule to our drive-time listening. But I don’t want her to walk around wearing ear defenders. I want her to know why life is precious, that our own safe existence is an accident of birth and history, that she must learn to stand up for others while she remains dry, warm and fed.

Teaching conflict in schools When my daughter heard the word “Taliban” on the radio earlier this year, she told me about “someone from history” who had been shot by them because she wanted to go to school. The someone was, of course, Malala. If it hadn’t been for the radio, would I have let her go on thinking that stories like Malala’s are ancient history, that the Taliban and others have packed up and gone home, shamed and silenced? I hated telling her how other girls her age are denied basic human rights. But in the long term I am glad of these opportunities to seed truth into her nascent world view.

Do schools have a responsibility to teach children about conflict? “It is very much a school-by-school approach,” explains Ziff, a former English teacher who co-ordinates the wellbeing provision at a girls’ secondary school. “There is no clear guidance and it’s difficult because there are always sides in a conflict, and varying media presentations of oppressors and victims.

“In my school we have held presentations from the history and politics department giving clear and unbiased information, which children can join after school if they want to.”

In January 2021, Ziff set up a parenting support business - Toddlers, Teens and Between - with her friend Gemma Arnold, a primary school teacher also trained in mental health. Last month, the Department for Education announced a 25 per cent increase in children presenting with mental health issues compared to two years ago, averaging 1,500 children a week. There are fears this may be an undercount.

There are times when the news buzzes incessantly in the background, white noise against our own daily realities. And there are other times, when you tune in fully, and focus on the brutal truth of it all. These raw moments are unbearable.

So much that is true, it turns out, is unbearable. But we cannot hide it from our children forever. They will find out.

And when they do, they’ll ask why they didn’t hear it from you.

For younger children worried about the war in Ukraine or other conflicts, here are three ways to help them process their feelings:

Reassure them that they are safe and give them an outlet for how they are feeling, e.g. let them draw some of the Ukrainian children a picture.

Suggest a way that they can help rather than not talking about it or dismissing it, such as donating some of their toys to be sent to Ukraine.