I tested hangover pill and I still have a headache

Product promises to take pain away the morning after a night of drinking. Sophie Morris tries it out 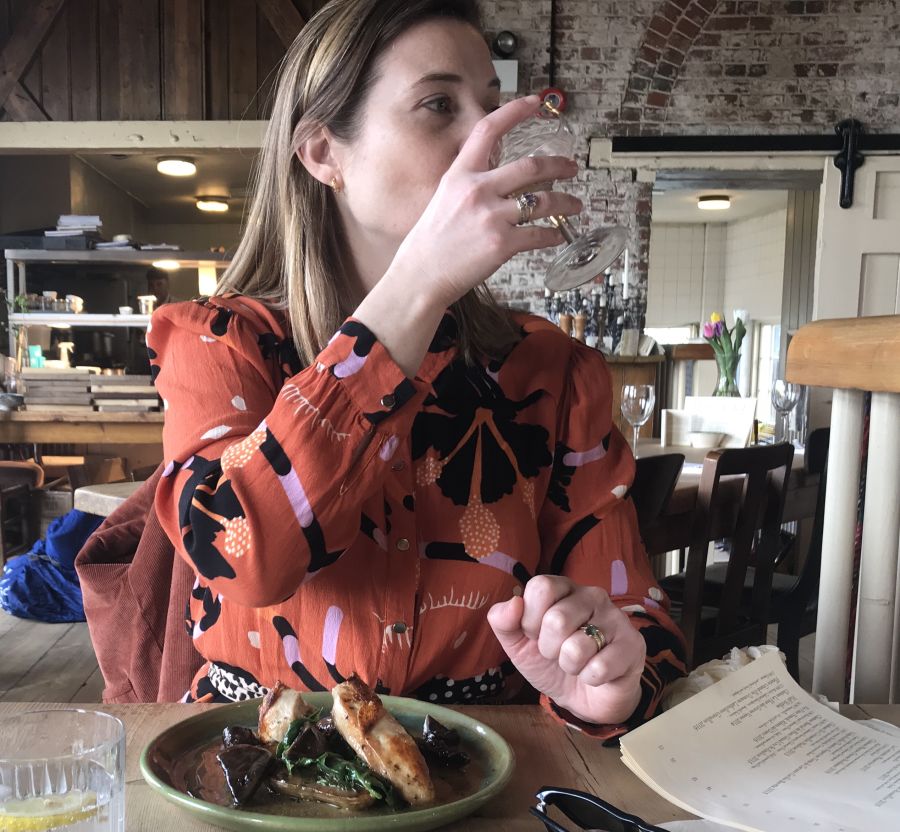 This is me drinking Oxney Organic English Sparkling at The Goods Shed in Canterbury on 17 March 2020, my 40th birthday. We were the only diners as Boris Johnson had asked people to stay home that week, before calling the first covid lockdown from the following week. We went home with a pile of ciabatta they couldn’t sell, and spent the next three months mostly indoors.

As I pour my fourth glass of wine, I’m fully aware that this generous slosh of crisp Italian white means I’m drinking to excess. It will take me to 9.4 units over a five-hour period - a whole bottle of 12.5 per cent ABV wine. The NHS guidelines recommend no more than 14 units a week, spread over three days or more.

This final - large - glass is also pointless in some ways, because I’ve taken a new pill, which launches in the UK this week, that promises to prevent drinkers from getting drunk.

How? It claims to break down alcohol in the gut before it reaches the liver. It also claims to ease hangover symptoms. Two pills, two quid, no dry mouth or throbbing headache. What is not to like?

This product is, boldly, called Myrkl. It is being marketed as the “pre-drinking pill that works” and makes some big claims, principally that it can break down up to 70 per cent of alcohol consumed after 60 minutes (based on an independent clinical trial of 24 people who showed “significant reduction of blood alcohol levels”).

So is this really a way to escape the grim side effects of the morning after a big night? Or, as the manufacturer insists, a solution to the mild hangovers of reasonable social drinking sessions?

“Moderate social drinking is a huge part of British culture,” says Myrkl CEO Håkan Magnusson. “Myrkl’s purpose is to help moderate drinkers wake up feeling their best the next day, whether they’re a busy working professional, young parents or seniors who want to maintain an active social life.”

As a middle-aged working parent, optimistically fanning the embers of a once-active social life, I fit across all of Myrkl’s target markets.

Last weekend was a typical one. On Friday night, I drove to meet a friend for dinner, accompanied by a non-alcoholic beer (Lucky Saint). Home by 10pm, I have a gin and tonic while catching up with my husband. On Saturday afternoon, I took my daughter to see Lightyear (a terrifying homage to sci-fi with little to do with Toy Story) with a friend and her daughter. We return to my house and, with both of our partners away, neither of us wants to parent while drunk or wake up with hangovers. My friend has an alcohol-free beer and I want some wine.

I take the Myrkl as prescribed - two pills, an hour before drinking. I have my first glass of wine at 6pm, enjoying its rounded peachy notes, excited about the possibility of not waking up feeling like an ice pick is lodged in my skull. At 42, even a couple of glasses can produce this effect, especially when combined with being tired, which I always am.

After half a glass, I feel the welcome signifiers of alcohol, an enhanced feeling of calm. I stop worrying about whether the girls have eaten enough and if I’d solved the riddle of the holiday club booking system.

By the time we sit down to eat, I am well into my second glass, which means I should feel drunk, but I don’t. I notice I’m talking a lot. Is it the alcohol? My friend, the sober judge in the scenario, says I don’t seem tipsy at all and reiterates this in a message the next day.

Why, then, do I pour another (my last) glass? It’s Saturday evening on a sunny weekend. I’m in a good mood and, as my friend isn’t helping, I may as well finish the bottle. I’ll admit, I’m pushing it to see what Myrkl can do.

What’s more, as I can’t feel the full effects of the alcohol, the trigger for me to stop has gone.

The strange stuff starts the following day. I wake up at 3am with a bout of existential anxiety. Nothing unusual there. But I soon fall back to sleep and enjoy, according to my Fitbit, eight hours and 11 minutes of sleep, well over an hour more than most nights. I feel rested, and in a good mood, when I wake at 7.30am, but find this unsettling in itself. What happened to permit such a binge drink without feeling as parched as a desert cactus the next day?

It’s not that I feel cheated of my hangover, but I’m suspicious of having cheated it.

I can’t help feeling I must be kicking the consequences down the line. As it turns out, by midday I have a mild headache. Is this because the Myrkl has worn off ? I also suspect masking hangovers in this way must postpone the side effects of drinking longer-term.

I don’t know many people for whom “British drinking culture” is not a conundrum. My friends have all either fully given up, mostly given up, or spend their social life talking about drinking, while drinking to forget about their problem drinking.

Myrkl was independently clinically tested on 24 people. The research showed that consumers who drank two glasses of wine (after taking the tablet) had 50 per cent less alcohol in their blood after 30 minutes and 70 per cent less after one hour.

The ingredients - the pills are vegan and made from fermented rice brans, B12 vitamin and L-cysteine, which is used in other pills for fighting hangovers - are all recognised as safe by the European Food Safety Agency (EFSA) and the US Food Drug Administration (FDA).

Myrkl is by no means the first pill in this field. Milk thistle has long been touted as a way to clear out your liver before a drinking session. Other products such as LVDY and Survivor contain vitamins, minerals and antioxidants to detoxify the liver quickly and fight the inflammation that makes hangovers hurt so much.

Dr Dawn Harper from Channel 4’s Embarrassing Bodies says of the pills: “To be clear, this is not a product for people that want to get drunk. Taking Myrkl prior to alcohol consumption will make getting drunk much more expensive and will take significantly longer.

“Where I think Myrkl could be relevant is for the huge number of moderate drinkers in the UK.”

However, some experts have told i that they are sceptical about the effectiveness of the pill.

But I don’t believe in silver bullets and worry they may lead me to drink more. The manufacturer is making a lot of noise about them being an aid for moderate drinkers and not the key to hangover-free binges, but I think British drinkers will use Myrkl in the same way they use alcohol - any which way they feel like.

Myrkl What the science says

Ashwin Dhanda, honorary associate professor of hepatology at the University of Plymouth, says: A hangover is mainly due to the dehydrating effects of alcohol, which can lead to a headache. The direct effect of alcohol on the stomach can also cause pain and nausea. If less alcohol is taken into the body, the risks of being dehydrated decrease. But since the pills only work after alcohol has passed through the stomach, they will not stop the alcohol’s effect on it.

The evidence for Myrkl is based on a single published research study. Although this study was well designed, several problems weaken the results. Firstly, the researchers only reported results from 14 of the 24 people because 10 had lower blood alcohol levels at the start.

Secondly, results varied between people, which reduces the accuracy of the study. And thirdly, the researchers tested seven days of treatment before a single drink of alcohol, but the company recommends only two pills, one to 12 hours before drinking any amount.

It is already known that friendly gut bacteria are changed by longterm illnesses and lifestyle (smoking, regular alcohol consumption and diet). It is also known that alcohol is absorbed differently according to weight, sex, physical activity and food consumption. These factors may reduce or increase the effect of the friendly bacteria in the Myrkl pills.

A pre-drinking pill would be of benefit to some people. However, the best cure for a hangover remains drinking less alcohol the day before. THE CONVERSATION.COM