It isn’t rude to be nude

A new picture book aims to take the shame out of naked bodies - and its message is aimed at parents as much as their offspring. By Sophie Morris 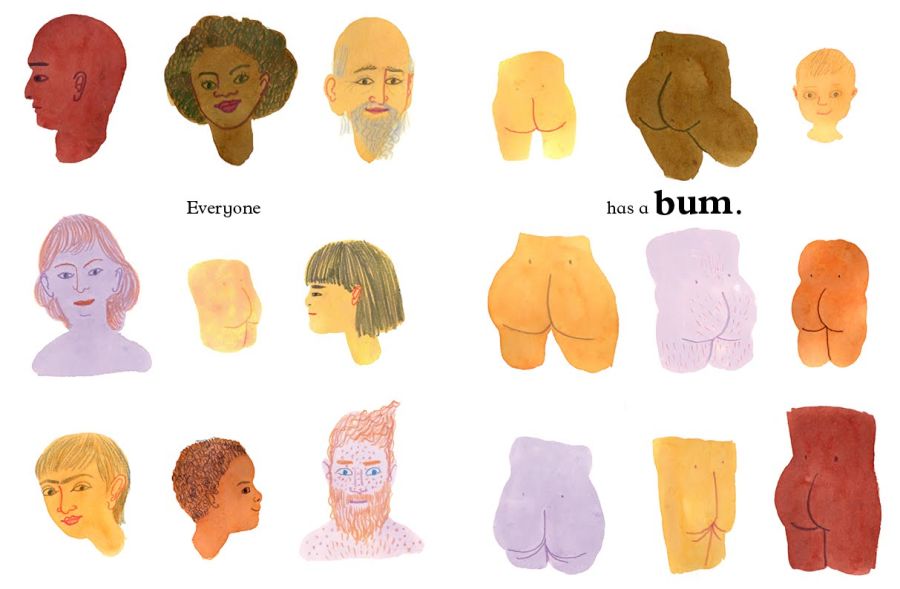 Open Rosie Haine’s debut children’s book and you’ll meet a page of bums. They are lilac, brown, red and peachtoned and accompanied with the words: “Everyone has a bum”. The bums are followed by a page of nipples of many shapes, sizes and colours proclaiming: “Nipples are normal”. The following pages are peopled with dancing bodies and playful expressions, soft lines and warm colours.

It Isn’t Rude to be Nude is a joyful exploration of the human body, from childhood to old age. “We don’t really see normal representations of nudity,” says Haine. “We’ve got really confused about nudity meaning sex and being obscene and shameful. But I’ve observed in children a healthy attitude to nudity, and lots of them will have spent most of lockdown naked. They already know it isn’t rude to be nude.

“As we grow older we lose that innocence and get all these insecurities. [The book] is as much a message for parents as for children, as that lack of shame in bodies has to be modelled by the parents.”

When Haine, 37, was developing her idea for the book, she remembered being intrigued by bodies as a young child, and standing outside her grandma’s bathroom door hoping to be invited in, though she never was.

She has always loved drawing naked people. She studied children’s book illustration and as part of her MA degree show she presented a page of naked children. “People said it was their children’s favourite page,” she says. She has an academic background in gender and ethnicity and wanted to explore how the body is used and sexualised and shamed around the world.

We agree to wear clothes outside the home, but are wobbly bottoms and empty breasts comfortably nude in your house? And if so, how does that work with whoever you live with? Do teenagers want to see their parents’ floppy bits striding past the TV room? Should parents cover up around children? There are no laws about how you dress at home, but there is a prevailing sense that nudity is connected to sex once you are past a certain age, and should be kept separate from children. This is despite the fact that no negative behaviours have ever been linked to parental nudity.

If we don’t see other bodies, how will we know what they look like? If you are told to cover up then those occasions when you can’t, such as for swimming or through a hot summer, can be tough to navigate.

“If you’re uncomfortable with nudity, children will pick up on that very quickly,” says Dr Keon West, a social psychologist at Goldsmiths University. A few years ago Dr West led a study which found that being naked or partially naked around other people results in liking your own body more, thinking better of yourself and enjoying more life satisfaction overall.

As the parent of a four-year-old I might read 10 picture books a day but I hadn’t considered their singular power before talking to Haine. “They’re a unique format,” she says. “You have the pictures and the words, but you also have the third space, the reader and the person they are reading the book to. This is very intimate, and I was purposefully ambiguous, intending to encourage conversations. But all parents have an idea about appropriateness.”

The book displays a variety of body shapes, sizes and colours. There’s a child wearing a prosthesis, and skin with freckles, scars and unusual pigmentation. Haine has chosen her language with care. She gives male genitalia the label “willies” and female “vulvas”. On a first reading I wonder why the boys don’t have “penises” if the girls are getting anatomically correct terms. “Willy rhymes with silly, and it works,” Haine explains. “Vagina isn’t quite the right word and I found fanny had negative connotations. People struggle with the female terms, because there are so many horrible words and euphemisms. I was conscious about consent, but children need language to describe if something bad has happened.” It’s proving a slow road to normalising the word “vulva” in our house as I can’t say it myself with a straight face.

Haine’s approach is much softer than the award-winning Danish TV show Ultra Strips Down, in which naked adults appear in front of 11- to 13-year-olds and answer questions about their bodies, such as when pubic hair grows. The show is popular in Denmark but drew criticism elsewhere once a clip went viral on Facebook.

“I wish some of the knee-jerk reaction was tempered by the fact this is cultural,” says Dr West. “In the UK we could have a show just like that, but with adults in bikinis, and some cultures would still say it was completely inappropriate in front of children. Then other countries, for example Brazil, would do it in smaller bikinis. We’ve been cultured to think that any more or any less is terrible. People would be more relaxed if they accepted these are positions on a spectrum, not intrinsically worrying or dangerous.”