Rima Theisen decided to do things in style when alopecia struck. She tells Sophie Morris why she rejected a wig but wanted her eyebrows tattooed on 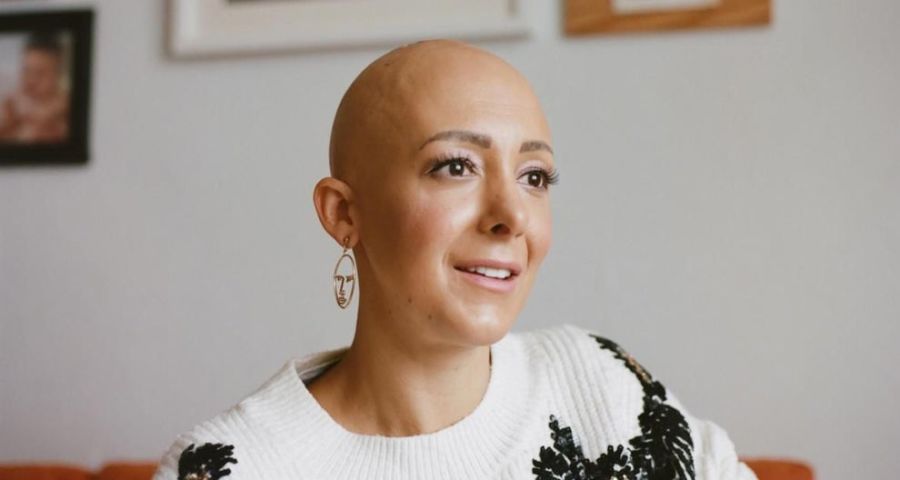 Rima Theisen remembers going out for dinner in April 2018 and telling her friends that her hair was falling out. “It was coming out in my hands, and there were clumps when I brushed it.”

But it was only eight months since the birth of her second child Clementine, now two. Rima’s thick, dark hair had grown in volume with the pregnancy hormones, and like many women she expected to lose some hair as her body readjusted. She had experienced some post-partum hair loss with her son Tennyson, born in March 2016, and was prepared for it.

By the middle of May, less than a month after that dinner with friends, Rima, now 38, had so little hair left on her head that she shaved it. By July, her eyelashes had fallen out. Then her eyebrows went. The GP did blood tests, and when the results came back normal, he advised her to pray. “He said: ‘Don’t worry, you’ve got loads of hair. Have you tried praying? I’ve seen God do some remarkable things,’” says Rima.

Instead of praying, she went to see a private dermatologist, who confirmed her suspicions.

“She took one look at me with this huge magnifying glass and said: ‘You’ve got alopecia universalis’, which I’d figured out because I’d done the research. I couldn’t see what else it could be.”

Rima was on maternity leave when she lost her eyelashes and eyebrows, the features she misses most. “Your lashes define your face. You look ill without them, especially if you have no eyebrows either. I knew immediately I wanted to get my eyebrows tattooed on. I expect if you ask, most people in the alopecia community would choose their lashes over their hair.”

She was also preparing to go back to work as a long-haul air stewardess, and did her first shift the month after losing her lashes. The one thing she never considered wearing for her first day back was a wig. “I didn’t want to disguise myself. I decided from the off, this is me now. I’m going to deal with this. It is just hair and I have the personality to carry me through.

Disclosure: I know Rima personally, and she most definitely owns her baldness. When I met her last autumn, not long after she’d shaved her head - raising £1,800 for the Teenage Cancer Trust in the process - I knew nothing about her alopecia and assumed she was rocking the bald look from choice, because it looked so good on her.

“Passengers are always really cool about it. They say: ‘I love your haircut’. I thought people might try and touch it like they do with pregnant women’s tummies, but they don’t. I’ve had a few passengers asking me if I’m doing chemo. Do you think I’d be doing an 11-hour shift in the sky if I had cancer? But it gives me a chance to educate them on alopecia as lots of people don’t know anything about it.”

Rima isn’t immune to traditional standards of beauty though, and at first she worried her husband Nathaneal, who moved from LA to Margate to start a family with her, might not fancy her. “I went through a stage of not feeling sexy, and it took me ages to accept that he loves me for me. I think he’s seen my strength and courage, and he’s been amazing.”

“People might question how can I promote progressive beauty when I wear fake lashes and have my eyebrows tattooed on, but eyelashes are functional. My eyes are sore without them. And I think I look dodgy without eyebrows! I try and find beauty in things other than my hair; maybe I’ll go heavy on accessories or a bold lip if I want to feel feminine.”

She started her Instagram account @thebaldmama to share her look and information about the condition with a wider audience. In a sea of positivity propaganda and woe-is-me social media accounts, Rima is a fresh and honest voice. On her page you’ll find photos with her family or on work trips in the US among posts about the practical aspects of living with no hair: with no lashes or nasal hair to protect her eyes and nose she has near constant allergies and colds. Most of the time she feels freezing. She often wears turbans and woolly hats, and in summer needs lots of sun cream for her scalp.

But she is quick to joke about the side effects of alopecia, and points out that painful hair removal is a thing of the past, and showering takes minutes.

Speaking out about alopecia has also brought opportunities Rima’s way. She was asked to be a model for jewellery brand Shoorah Shoorah and sit for a shoot with the portrait photographer Kat Green.

“Don’t get me wrong, I loved my hair,” she admits. “But I thought: ‘I either accept this, or I let it really upset me and go deep into my core’. People think they have to conform to specific beauty standards. Why should we have to have hair to feel beautiful or sexy, or to fit in? It’s nonsense, just a construct made by magazines and men.”

Follow Rima at instagram.com/@ thebaldmama Bald statement Alopecia universalis Alopecia universalis means total hair loss from the head and body. It is an advanced and rare form of alopecia areata, which causes the loss of patches of hair. It is an auto-immune condition, under-researched and not fully understood, but it is believed the body’s immune system mistakenly attacks its own hair follicles. It affects about one in four thousand people.