Oh we do like to clean beside the seaside

While rubbish, plastic waste and PPE threaten to overwhelm our shores, Sophie Morris meets the community crusaders fighting on the beaches 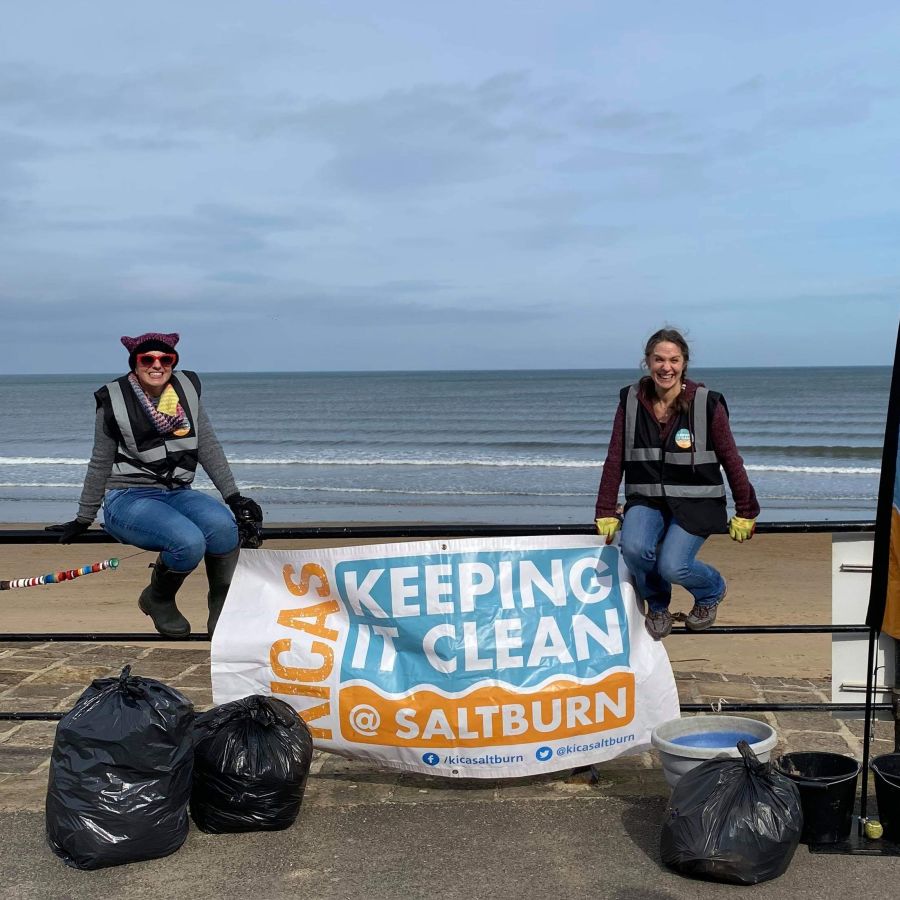 There came a point, Jo Yaldren tells me, at which her insistence on bringing a pair of washing-up gloves on every beach walk “started to do my husband’s nut”. But there was no chance she was leaving them behind. With 5,000 items of plastic pollution per mile of British beach - some of it litter left on the beach but much blown from elsewhere - beach cleans protect the sea and marine life as well as tidy up natural areas for locals and visitors. As we gear up for another year of staycations - and as littering in parks and beauty spots continues to make headlines - keeping our coastline clear of rubbish has become as much a community crusade as a municipal headache.

Yaldren lives in Saltburn-bythe-Sea in North Yorkshire. A former nurse and lecturer, she found space and solace in nature after a Parkinson’s diagnosis in 2015. She also found rubbish, an endless torrent of plastic waste. She began to clear up herself before hearing about the 2 Minute Foundation. It provides stations to erect on beaches with advice and materials for would-be litter pickers to conduct a “two-minute beach clean”.

These stations cost £420 (although people can “adopt” one by paying towards it) and thanks to some sponsorship Yaldren was able to bring one to Saltburn.

She also turns her trash into treasure, making pretty jewellery out of seaglass and selling it as The Tinkerist on Etsy, donating 50 per cent of profits to the 2 Minute Foundation. Pre-Covid, she might have been joined by as many as 130 others on a clean. In the meantime she has raised enough to fund another station, and one is on its way to Cumbria, where 14-year-old Lucy Grecic is leading the call to clean beaches.

“I got involved because I care a great deal about the planet and the climate crisis,” says Grecic. I often went on walks with a litterpicker, but I wanted to do more. I found out about the stations on a holiday I thought it was the perfect opportunity for me to make a difference.” Her enthusiasm - and Yaldren’s funding for the 2 Minute Foundation - meant that there is now a beach clean station, located on the promenade in Arnside, Cumbria.

Disposable PPE and overcrowded beaches are a particular worry this year, says the Marine Conservation

Society (MCS). Its beachwatch officer, Lizzie Prior, oversees its annual Great British Beach Clean in September which asks volunteers to survey 100m of beach and analyse the findings. “Finding PPE on a third of all beaches [in 2020] was shocking,” she says.

Beleaguered coastal councils are starting their summer litter campaigns earlier than ever and calling in extra support as they anticipate a bumper year for British beach tourism, starting during the Easter break. Bournemouth, Christchurch and Poole Council launched a £1m taskforce last week to cope with visitors to the area’s many popular beaches, which will include extra bins and litter collections. Brighton & Hove brought its summer waste collection services forward after a busy February and March.

As a guide to how our dependence on single-use plastic has increased since the first Great British Beach Clean in 1994, the volume of non-sourced data - items too small to categorise which are usually plastic pieces - has grown from 20 per cent to 50 per cent. Wet wipes weren’t listed until 2005.

“Picking up the litter won’t solve the problem,” says Prior. “It has a positive impact but we need to stop it getting there in the first place.

That’s why we make it a citizen science project.”

The increasing number of community-organised beach cleans has emerged from improved knowledge about ocean plastic, and collective horror at the state of British beaches after a sunny day last summer. “Everything spiralled into a unique situation that hopefully we won’t get again,” says Prior. “It was a shock for councils.”

As British beaches filled up last summer, Amy Cook wondered why the central beach in her home of Margate, Kent, wasn’t getting as much love as nearby stretches of sand. She worked out that because the Main Sands, only a few minutes’ walk from the train station, is the first stop for summer tourists, no one was treating it as their own.

“Locals often stay away in summer because it gets so crowded and messy,” she says. As a theatre designer with time on her hands due to Covid restrictions, she set up Rise Up Clean Up, leading regular beach cleans. “As soon as someone approaches you and offers you a bin bag it expresses that the social norm here is to take your litter with you - 99 per cent of people take one and instantly start putting their rubbish in it,” she says.

Cook has also designed an antilittering strategy for Margate including bin signage and bin-bag points, an installation at the train station and a mural project in theme park Dreamland. She hopes Rise Up Clean Up will launch this with council support before the deluge of tourists begins.

Yaldren’s efforts have led to Saltburn achieving Blue Flag status for its clean beach. “My vision,” she says, “is that I can eventually go for a walk without taking my Marigolds with me.”

Covid rules do not currently allow gatherings of more than six, so wait until the rules relax for group cleans ? Safety first: wear gloves, use litter pickers, monitor young children ? Check if there’s an existing clean you can join. There are 900 2 Minute stations around the UK and Ireland ? Many organisations including Surfers Against Sewage and the MCS have guidance, for example you need to notify the landowner and carry out a risk assessment ? Make it social - there are very few cross-generational activities at the moment