One more for the sky?

A new initiative aims to stop people getting drunk on planes. But what is fuelling this growing problem and can anything really be done to stop it? By Sophie Morris 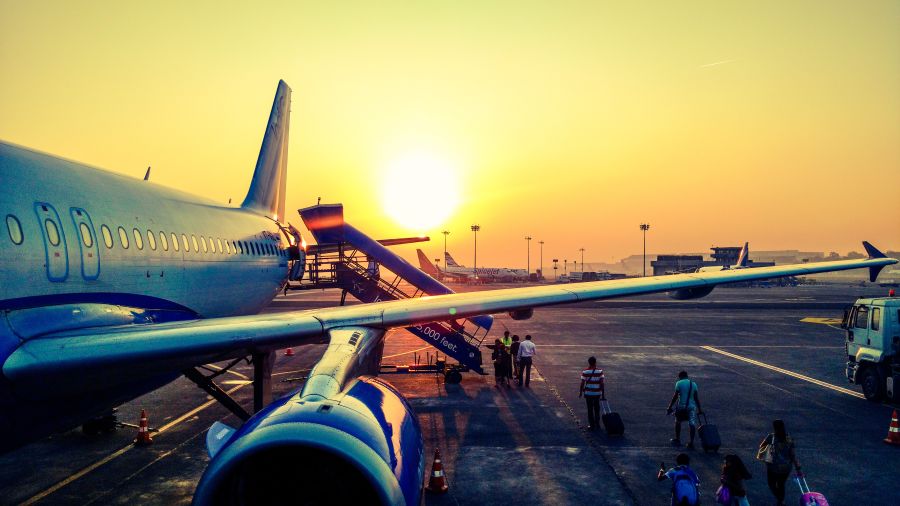 Georgia Lewis, a journalist who flies often for work, was in the air between Amsterdam and Dubai when a very drunk man collapsed at her feet. “He was not in a good way,” she recalls of the KLM flight. “I pressed a button for assistance multiple times and nobody turned up. He started to puke, and I thought he might choke, so eight stone of me rolled about 14 stone of him into the recovery position.

“I yelled: ‘Is anybody working on this plane?’ And finally a pair of flight attendants appeared and giggled like idiots. No apology, just stupidity. They folded out the little seats where they sit for takeoff and landing, laid him across them, and left him there. The man then puked on one of the seats.”

This was in 2010. Jump forward almost a decade, and it’s very unlikely you’ll find cabin crew untrained or inexperienced in dealing with drunk and disorderly passengers.

In the past eight years the number of UK air passengers has increased from 200 million to 300 million, and there are plenty of drinkers among them.

Drunk Britons on planes have become such a problem that, last week, a judge gave a 21-week sentence to a 51-year-old British woman who punched a flight attendant, the first time a custodial sentence has been handed down for drunken behaviour on a plane.

A BBC Panorama investigation discovered last year that more than half of all cabin crew have witnessed problem behaviour caused by alcohol, and the numbers are rising quickly: 387 people were arrested for being drunk at an airport between February 2016 and February 2017, compared to 255 the previous year.

On Friday 27 July this year, ahead of the busiest weekend for flying in the UK, aviation minister Baroness Sugg announced that the Government is backing a major push to tackle the issue.

The message of the “One Too Many” campaign is that getting drunk on planes can lead to serious penalties, including fines of up to £80,000 for causing a plane to be diverted. Posters telling tipsy passengers they risk being denied boarding, banned from flying or being sentenced to up to two years in prison will appear in airports across the country.

Behind the campaign are multiple travel trade associations, backed by 10 major airports. The UK aviation industry already has a clear, if voluntary, code of practice on disruptive passengers, which includes a zero-tolerance approach to disruptive behaviour and the responsible sale and consumption of alcohol, but this hasn’t been effective enough.

So why are Brits getting so drunk at airports and on flights? Is it only about getting into the holiday spirit? Drinks on short-haul flights are expensive, and you’re lucky if the trolley makes it round once, so how are we packing away enough units to cause plane diversions and leave families in fear of travelling on certain routes? “I ended up on a ‘party plane’ with my young family,” says 46-year-old Juliet McGrattan, a former GP from Lancaster. “It was terrifying, as it got out of control and a fight nearly broke out.

“It ended with the man who was sat next to me and my young daughter stripping naked and running down the aisle just as we were about to land.”

The assumption is that most of the drinking goes on at the airport, where shops and bars operate outside of normal UK licensing laws, and can serve travellers pints with their breakfast before they surreptitiously swig down their duty-free.

Frustrated airlines say the airports profit from the drinkers, leaving them to clear up the mess. Ryanair has called for new limits several times, asking for a ban on serving alcohol before 10am and a two-drink limit before a flight.

“It’s completely unfair that airports can profit from the unlimited sale of alcohol to passengers and leave the airlines to deal with the safety consequences,” said Ryanair’s chief marketing officer Kenny Jacobs. And according to Phil Ward, the managing director of Jet2.com: “The time for taking action is long overdue.”

But Francois Bourienne, chair of the UK Travel Retail Forum (UKTRF), which represents airport shops and bars, says the problem comes from “new types of passengers” and that the growth in ticket sales is largely as a result of low-cost carriers taking stag dos and hen parties to Benidorm or Ibiza.

These groups don’t arrive at the airport five hours before their flights, he says, to start drinking. They’ve been drinking beforehand, and airlines could identify potential trouble causers early on by giving pep talks to group travellers and not allowing them to sit in one block on the flight.

I am surprised by how many people I know turn out to have a drunks-on-a-plane story. Apparently, only one in 640,000 passengers causes trouble - the “one too many” - but because we fly so frequently, plenty of us have met this passenger. Other stories I hear include passengers projectile vomiting and soiling themselves and the seats, and trying to open doors and windows.

Maya Middlemiss, a British writer who lives in Alicante, says that flight delays contributed to what she describes as her “flight from hell”.

“Screaming rows, piles of vomit, singing, chanting abuse,” she remembers. “Before we landed, the captain had to come into the cabin and explain he was happy to circle all night but we were not going to land until everyone sat down and strapped in.

“When we landed we sat amid the piles of sick for another half hour before the Guardia boarded and took off half a dozen people in handcuffs.”

All cabin crew receive training in dealing with problem passengers but, according to Rafael Schvartzman, regional vice president for Europe at the International Air Transport Association (IATA), disruptive passenger incidents rank in the top three concerns for flight staff. “Cabin crew and passengers have a right to be free from disturbance and harassment,” he says.

To nip problems in the bud, airline staff have more than a few unofficial tricks up their sleeves.

One source tells i that on a flight to Vegas, a known problem route, the pilot pretended there was turbulence to empty out the upper class bar; the passengers returned to their seat and peace was restored. Apparently this is a well-used ploy en route to Vegas.

Several airlines confiscate all duty-free booze at the gate on flights between certain UK airports and high-risk destinations such as Ibiza. Elsewhere, canny tricks are deployed - such as wiping the rim of a drunk passenger’s glass with whatever spirit they’re drinking, and filling it up with mixer. The drinker gets a hit of the alcohol and merrily drinks on, suspecting nothing.

The need for a clear strategy to deal with this growing problem is obvious, but the repetition of the phrase “zero tolerance” by those tackling drunk flyers sounds heavy-handed. What about those of us who like to snuggle up with a mini wine or three and a tearjerking romcom on a long-haul flight, but will never be drunk and disorderly? Should we fear for our right to drink? Simon C Moore, a professor of public health research at Cardiff University, thinks it’s time to call time on airport drinking, and for those who fear flying and selfmedicate with alcohol before a flight, Moore says there are far safer ways to manage their fear.

“It’s not about being puritanical,” he wrote in a recent opinion piece for website The Conversation. “During air travel, travellers are contained in secure areas, with no choice over their fellow passengers. Removing the irrationality of intoxication from such an activity is not the tyranny of the majority, it is simple asking people to temporarily abstain.”

“We don’t think that’s necessary,” says Chris Goater, an IATA spokesman. “An airport is no different to any other part of life and the vast majority of people drink responsibly. What we’re hoping is that it becomes socially unacceptable to be drunk on a plane, just as it’s no longer socially acceptable to drink and drive.”

Drinking and flying: the rules What the One Too Many campaign is up against The shops selling alcohol at airports are not subject to UK licensing laws, so can sell it 24/7. Ryanair has called for a ban on pre-10am sales, but the UKTRF argues only 20 per cent of problems occur at this time.

It is against the law to be drunk or to act in a disruptive manner while flying.

There is no one legal age limit for drinking in the air. The choice is up to the airline, though they tend to stick to local laws when on the ground. There are a number of airlines, from Asia and the Middle East, that don’t serve alcohol.

The new campaign aims to commit airlines and airports to properly warning customers about the dangers of drinking and flying, as well as refusing to serve those suspected of intoxication.

Why do I feel more drunk?W Because you’re excited about going on holiday. Seriously: although the Civil Aviation Authority (CAA) says that low air pressure when flying thins the blood, making you feel the effects of alcohol more strongly, other experts have said it’s because less oxygen reaches your brain while you’re trapped in a cabin atmosphere, a condition called hypoxia.