Running into an age-old problem

Does running make us older or help us stay young, asks Sophie Morris 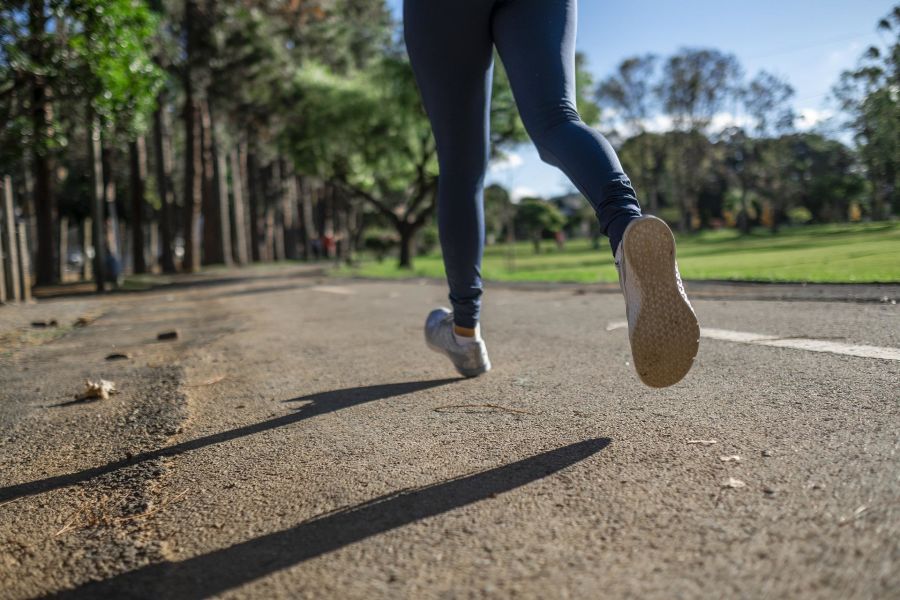 Woman’s feet on a run in the parl (c) Pixabay

I ran most days for more than a decade from my early twenties. I started with weight loss and a healthier lifestyle in mind, but when neither stuck I kept up the running for the thrill and the adventure. I was hooked on the exhilaration of running up Primrose Hill five or six times before work, the permissiveness of tracing the streets of a new city at dusk, the challenge of beating my own personal bests.

The last thing on my mind was ageing. But my pavement pounding habit exacerbated a niggle in my lower back which ended in surgery to remove a disc. Six years on, I feel mostly healed if still in regular pain, but am I too old to revisit running? Now 42, various bits of me creak, and I wonder how the benefits of cardiovascular fitness and general wellbeing - from the fresh air, sunlight, early mornings and better diet - balance against the stress running might put on my joints, not to mention (whisper it) so-called runner’s face, and putting additional strain on a drooping décolletage.

HEART RISK
At least I’m not a man. Surprising research has found that long distance running can add a whole decade to the vascular age of male athletes. Their major arteries were found to be far stiffer than expected, leaving them at greater risk of heart attack and stroke. The study looked at runners over 40, but the results for women among the more than 300 participants told a different story. Endurance events (marathons and triathlons) were found to boost women’s health, reducing their vascular age by an average of six years.

Marathon runner Sharon Smith (inset), 72, has been running competitively for 12 years without any sign of an injury save one sustained while dancing with her dog. “I didn’t have any aches after my last marathon,” she says. “Not one. Probably because it was a long walk back to the hotel! But I do worry my heart might give out”.

In the last London marathon, Smith had hoped to win her age group but was beaten by the Olympian and world record holder Yuko Gordon. She will try again. She has never run further than a marathon but has noticed many of the women at her running club - Running Somewhere Else in Cirencester - are training for ultra events. “It would be interesting to know what the long-term effects are because the training is very wearing,” she says. “We all know that fast bursts of speed are good for you but I’m not sure about endless 12-minute miles.”

The research, funded by the British Heart Foundation (BHF) and Cardiac Risk in the Young, is not yet peer-reviewed, and the discrepancy between men and women remains unexplained. Professor James Leiper, associate medical director at the BHF, said more research is necessary and pointed out the benefits of running. “[E]xercise is proven to reduce the risk of heart and circulatory diseases, helping to control weight and lower both blood pressure and cholesterol.”

HEALTH MYTHS
Despite this reassurance, it is women who are typically framed as having something to lose from running. We told to fear a saggy jaw line, wrinkles or liver spots from daring to spend hours outside. It is the elastic skin around our neck, chest and breasts most at risk of passing a point of no return, in perkiness terms, we’re told.

“Never heard of it,” says British Athletics coach Jo Wilkinson, 49, a long-distance runner and former elite athlete who has competed in the Commonwealth Games and finished in the top 20 in the London Marathon. “It sounds like madeup rubbish.” On closer inspection, it feels like “runner’s face”, which refers to the fat-free features of long-term runners, is more of a myth designed to make women feel bad whether they exercise and carry fat on their faces or not, and gels with the Kardashian era of minuscule women with the curiously plump cheeks of a toddler.

Wilkinson trains female marathon runners in their forties and fifties. “Almost all of them come into running later in life,” she says, “often getting into it through the ‘Race for Life’ (a Cancer Research UK event) and to lose weight, then find they enjoy the competitive aspect of it and transition into serious runners.” Is middle age the optimum time to pick up running? “I think it’s good to start at any age,” says Wilkinson. “And as running is a weight-bearing exercise, for women heading towards the menopause and coming out the other side, we know that bone health is critical and improved by weight-bearing exercise.”

BREAST FOOT FORWARD
Before the 2021 Tokyo Olympics a survey found that one quarter of British athletes had taken medication for breast pain, and three quarters had never been fitted for a sports bra. As we age, the elasticity of the skin and muscle supporting our breasts decreases. And poorly-supported breasts can also lead to back and shoulder issues and even affect your stride. Research from Brooks Running and the University of Portsmouth found that running in an inferior bra can shorten your stride by 4cm - that’s an extra mile over a marathon.

INJURY RISK
Our knees are most at risk of a running injury, says consultant orthopaedic knee surgeon Khalid Al-Dadah, of London’s New Victoria Hospital. “The knee can take up to seven times your body weight during day to day activities, and this is amplified during running. Runners can develop “runner’s knee” which is an overload syndrome to the front of the joint.” He points out that exercise is a friend not foe as we age and is “vital to strengthening bones and tissues within your joints”. If running is causing persistent pain he advises switching to something like cycling. “A sedentary lifestyle can cause weakness, making you much more susceptible to injuries,” he explains. “Regularly loading your joints with effective exercise stimulates remodelling and bone formation, making joints stronger.”

So, running reaches past our muscles and joints and its cognitive and wellbeing effects are well documented. I’m yearning to put my running shoes back on - if I can find them.

How to run safely at every age

PLAN Most of the injuries in running come from overdoing it,” says Wilkinson. “You have to do the basic conditioning and strengthening and build it progressively.” If you do get an injury, she says, do see a physio; don’t ask for advice on Facebook!.

PACE YOURSELF Sharon Smith, a 72-year old marathon runner, says she has three golden rules. “Don’t listen to your body until after three miles. By then you will be warm and feeling fine. Never take medication to mask an injury. Don’t ever stop on a run, just slow down if you are suffering.