Steak through the heart

What happens when your partner turns vegan? If you only eat plants, would you date a carnivore? Sophie Morris finds out more about love across the dietary divide 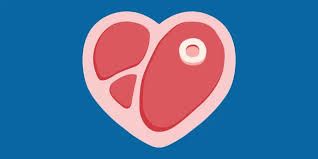 Type the words “vegan” and “marriage” into Google and the results do not speak of great harmony across the dietary divide. “My partner has turned vegan and I am seething about it.” “Veganism put a strain on my marriage.” “Seven relationship survival tips for the vegan/non-vegan couple.” Is it really that grim being in a long-term relationship with someone who prefers broccoli to burgers, or T-bone to tofu? “I was so unhealthy as a teenager,” says Emily Joret, now 39 and a vegan. “I only ate yellow foods. When friends came round I gave them Bernard Matthews turkey and Quaver sandwiches on white sliced bread.”

Her eating habits evolved as she grew up. “I’ve always had a soft spot for animals, but I come from a farming family. When I was 22 I remember seeing livestock in the Australian outback, on their way to slaughter in 40-degree heat, and not wanting to be part of that.

“A year later I went to Glastonbury and ate vegetarian food for the whole festival. Afterwards I realised how good it had made me feel.”

Others might have experienced a similar epiphany last month following the headlines from the UN’s special report on climate change, which named plant-based diets our best hope for mitigating and adapting to climate change.

“We don’t want to tell people what to eat,” said Hans-Otto Portner, an ecologist at the Intergovernmental Panel for Climate Change, “but it would indeed be beneficial, for both climate and human health, if people in many rich countries consumed less meat, and if politics would create appropriate incentives to that effect.”

Joret met her husband when they were 20 and remembers eating steaks every week at the restaurants they worked in. Since then she’s had a career as a lawyer and now, after getting three children to school age, is beginning a new role as a health and life coach at Do Mind Me. Two years ago, she became a vegan - but her husband still eats those steaks.

If the online horror stories are to be believed, will they make it to their next wedding anniversary? “Coping with difference is a fundamental part of why people come to counselling,” says Peter Saddington, a Relate counsellor in the Midlands.

“You can’t escape food. You eat every day so it’s an issue every day and tricky to manage. Can very strict vegans use the same cooking utensils as people who eat meat? Can you even use the same kitchen?” Joret has never encountered these sorts of issues with her husband Matt. “He’s always been respectful and agrees with the ethos behind it,” she says.

“I think he was a bit sceptical of me turning vegan, but now he sees that sportspeople are following this diet. The kids are vegetarian but I’ll cook a turkey at Christmas for him. There’s something celebratory about having the bird in the oven which you don’t get with a nut roast.” Their acceptance of one another’s diet is a sign of a strong relationship.

“It’s how you negotiate the differences that matters,” says Saddington, “and your ability to manage and overcome them.”

Dominika Piasecka, 25, a press officer at The Vegan Society, has been vegan for seven years following two of vegetarianism (and yes, they prefer you to be vegan for the duration of your employment there). When she met her boyfriend last year he’d already been vegan for a couple of years. “I did date some non-vegans when I was single because I consider myself to be an open-minded person,” she says.

“I don’t mind eating around non-vegans. I find it sad more than anything that someone I like contributes to animal suffering - something I try so hard to change in my personal and professional life every day.

“Veganism is not just the way I eat, it’s the way I look at the world.”

I ask Saddington about this outlook, because it’s the perspective I expected from most vegans. Veganism is often a political choice as well as a lifestyle one. Pairing a vegan with an omnivore is as unlikely as a Tory marrying a socialist, isn’t it, or an atheist breaking bread with a deeply religious partner? Even though we all know these couplings exist.

“There’s a difference between someone who’s had a belief about veganism and developed it over a number of years, compared to someone who jumps on this UN report, or other news stories about the impact of eating animal products, decides not to eat meat, and is angry if their partner doesn’t do the same,” explains Saddington. “Are you going to be angry at the rest of the world, or just angry at your partner?” According to a report published by data and analytics company GlobalData in November 2018, almost half (42 per cent) of British vegans had turned to the diet within the previous 12 months.

“Is this about this issue, or other resentments?” posits Saddington. “If you’re vegan because you have a belief in it, maybe you also have a tolerance for difference. If you’re becoming radicalised, that radicalisation can mean no tolerance, you want everyone else to change.”

Kerstin Rodgers, otherwise known as the chef and food writer Ms Marmite Lover, is a pescatarian. She says that she can smell a meat eater. She’s even on a vegetarian dating site, veggieromance.com. “I want someone quite macho but also veggie,” she says.

Although she prefers to date men who don’t eat meat, she’s ended up with some who do. “Usually if I’m in a relationship with them, they don’t eat meat in the house but will have it at other people’s houses or at restaurants. I think that’s polite.”

Trend forecasters predict that plenty more Britons will fall in step with Joret in trying out, and sometimes sticking with, new diets which reduce or cut out animal products. How should the other person in the partnership react? Saddington recommends spending more time listening rather than arguing about it. Resistance encourages the other person to fight and become radicalised. Ask them about it instead. “That way you’re more likely to get them thinking about it themselves, and are more likely to change their behaviour.”

Joret’s tolerance of her husband’s meat-eating has indeed had a positive effect. Although she will cook meat for him in the house, he says she doesn’t need to and often chooses non-meat dishes out of the house.

“I would be happy if Matt said he was going to be fully vegan,” she admits, “but I wouldn’t push clients towards a vegan diet.” Thankfully, it looks like it won’t be a case of till flesh do us part.