Chips off an old block go into the making of terrazzo, the rebel cousin of marble and granite. Originally used as cheap flooring, it has become fashionable in its own right, says Sophie 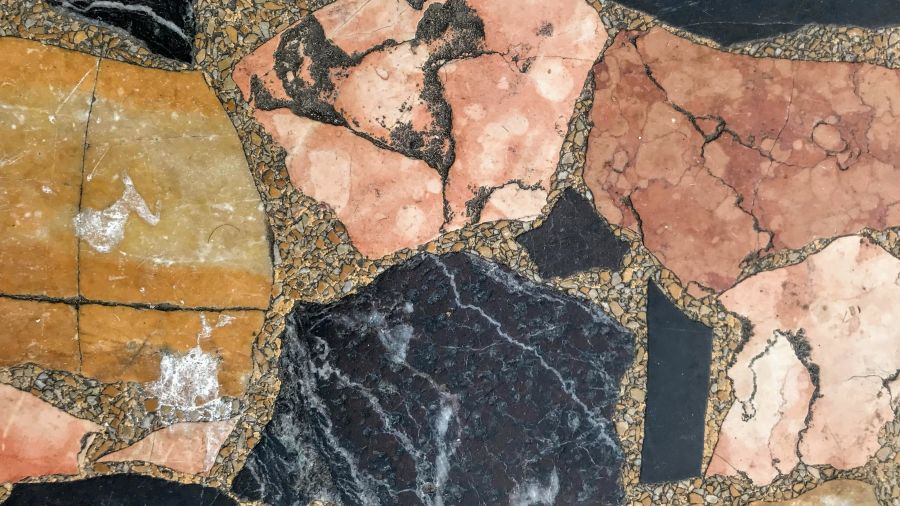 At some point in the past year, I realised that I was lusting after the Tube station look as a home decor aesthetic. It was the floors. Living in London might make me trudge underground for half my life, flanked by crowds of heads-down commuters, but look what I get to walk on - miles and miles of stunning, jewel-coloured, patterned terrazzo. Red carpet looks so naff in comparison.

Terrazzo, by the way, which you may start to notice everywhere you go now, is the hard-wearing flooring made by setting chips of natural stone in concrete. It can be made with any stone, hence the potential for so many different patterns and colours. It is the rebel cousin of marble and granite, all three luxury materials which have long been used in public spaces for their durability, and have made their way into our homes at the intersection of glamour and sustainability. Once my terrazzo love was sparked, I began to notice it everywhere: on the saddest side streets and in the smartest bars. Now the material has made it into kitchens and bathrooms, and you will find the pattern replicated on fabrics, homewares and fashion.

Diespeker and Co is a British company at the forefront of this revival. It has just launched a luxury magazine. and later this year will unveil its first furniture and homewares collection, Diespeker Living, including products like a side table by the Topshop fashion designer Marte Brauter (£299, brauterdenholm.com, out of stock at the moment but homeplace.co.uk has a similar one for £140).

“Until recently most of our terrazzo projects were commercial - retail, offices and restaurants,” says Diespeker’s managing director John Krause, who has worked there since 1977. “Suddenly the word seemed to get out and terrazzo developed a ‘luxury interiors’ profile. Designers started asking about terrazzo for kitchens and bathrooms, and it took off from there. It has become so in vogue that we have seen terrazzo print wallpaper, cushions and bags - but there’s nothing like the real thing!” As it makes use of offcuts, terrazzo used to be a cheap flooring option. It was the quarry workers who would use it, as an affordable way to fit a stone floor in their own homes. However, as demand has grown, so has the price. Terrazzo production is more labour-intensive than working with natural stone, but it also has different qualities. Krause suggests that the current popularity could be connected to its versatility. “Granite and engineered stone are limited in terms of thickness, colours and variance,” he says. “With terrazzo, the sky’s the limit. There is an infinite ability to customise and as it can be poured as a liquid screed, terrazzo flooring can have a beautiful, seamless finish.” As a marathon runner, Krause goes terrazzo-spotting all over the world. One of his favourites is a vibrant, patterned example in the Boardwalk Shopping Centre in Atlantic City’s Caesar’s Palace Hotel. It is a resin-based terrazzo, which is more flexible than the traditional concrete.

Diespeker sells a multitude of different-coloured terrazzos, from bright pink and green resins clutching large shards of shiny white marble, to black bases studded with multi-coloured stones, and blushing pinks, greys and blues constructed from tiny chips which blend together until you take a closer look.

The best-selling product for interiors is a combination of blacks, browns, greys and whites - TE007 online shows the Luminary Bakery worktop, and a home flooring and shower in images from Diespeker - which can be used for countertops, flooring, cladding and furniture design. Apparently, it is so popular because the warm mix of colours means that it does not clash with anything, and it hides dirt and water marks well.

“A terrazzo kitchen won’t have the lifespan of granite,” says Krause. “But I would liken it to fashion; we don’t always buy clothes for longevity but because they give us the look we want at that moment.”

This is where the spin-off products come in. If you cannot splurge on a floor, perhaps you can stretch to wallpaper, a salad bowl, a brightly-coloured rug, or some sweet storage tins.

Ferm Living has a set of three tin boxes in Rose (£30, trouva.com) and a large terrazzo tote bag (£16, trouva.com) in three different colours. For kitchenware, try Dassie Artisan, which has a range of terrazzo-effect bowls and plates including a large salad bowl (£44, dassieartisan.com), and jugs (£27-£38). At made.com there is a cute conical lamp in pink terrazzo, and nubie.co.uk, which specialises in children’s interiors, has a terrazzo range including brightly-coloured rugs.

Do these light-hearted takes on terrazzo detract from the real thing? Diespeker is no stranger to interpretation: it completed a project for the Olympic Park of a terrazzo floor containing crushed debris from old buildings demolished in the area. It has also used brass, shell, mother of pearl, bullets, and broken Peroni bottles in its terrazzo. For this last job, the team really had to show its commitment, by drinking the beer from 100 bottles of Peroni in one night, all in the pursuit of a brilliant terrazzo. I’ll drink to that.