Why I’m binning my chores

The average British woman puts in 12 more days of housework each year than her male counterpart, and the gap between the genders is widening. Sophie Morris and her husband swap places to find out what they can learn 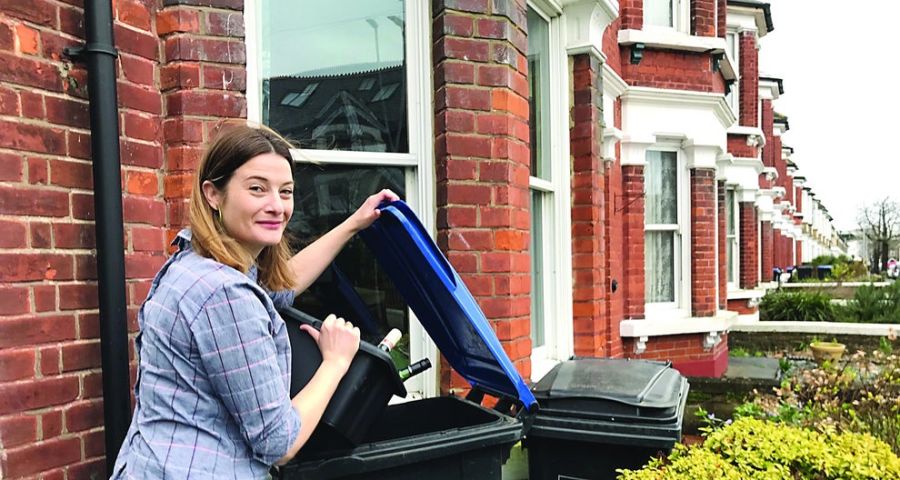 Do you identify more with a Mrs Hinch or a Motherland lifestyle? The former, a social media celebrity, has long hair, long nails and is on first-name terms with her favourite cleaning cloths. The latter, a BBC2 comedy set in north London, portrays harried working-from-a-café-in-between-French-class-and-pilates parenting, a middle-class ideal where women enjoy dynamic, if part-time, careers and the debatable luxury of quality time with their children. For this second set-up to function, the cleaning must be outsourced.

Men are largely absent from both scenarios, but before we start, let’s agree that we are talking about #notallmen and #yesallwomen. I’m afraid so. Housework is the one area of our lives in which women, overall, have made little or no progress since the advent of suffrage, feminism, Dysons and anti-discrimination legislation. In fact, the small gains made are gathering dust.

I’m not exaggerating. British men in their thirties and forties do two hours less housework today than they did in 1998. In heterosexual households where a woman is the main earner, the more she earns, the less her partner contributes at home. We march for representation. We’ve set goals for narrowing the wage gap. But the loo-scrubbing gulf is widening by the generation.

Journalist Sally Howard explores domestic labour in her new book The Home Stretch: Why It’s Time to Come Clean About Who Does the Dishes.

“I’ve been interested in these issues for a long time because my mum was a domestic science teacher and archetypal good lifer,” she explains. “But housework has totally gone off the boil in feminist academia and in popular feminism. It’s considered unsexy. Housewifey.”

Feminism has focussed on glass ceilings and body positivity, and left our dirty knickers behind on the floor. As has Howard, for now. She has other things to think about. After becoming a parent she noticed the onset of her “second shift”, the unpaid domestic labour done by women already working a first shift for money. This second shift sits in the eye of a storm of many similar concepts describing women’s extra slog - emotional labour, mental load and invisible labour.

Mandu Reid, leader of the Women’s Equality Party, tells me that our unpaid care work has a price, £77bn annually. “Think about that,” she suggests. “Women’s invisible paid labour is adding billions to our economy while the burden of that labour means that women are suffering economically and are more likely to live and retire into poverty.”

Stretching thinner In her book, Howard travels to Brooklyn to visit Silvia Federici, cofounder of a 1970s movement called Wages for Housework. “In a sense, it was our fault as feminists,” Federici explains. “This idea came about that waged work would be the path to women’s liberation. Of course, that didn’t work out, as neither the state or men stepped in to fill the shoes vacated by the full-time housewife.”

Working mothers began to stretch themselves even thinner. White feminists paid other women to do the housework, forgetting their solidarity with women of colour. In 1980, 60 per cent of British women worked. Forty years later, most households need double incomes, and that figure has risen to 71.8 per cent. In this time, our attitude to bought-in domestic labour has changed dramatically. In 1980, 5 per cent of us paid cleaners. By 1995 it was 10 per cent.

My husband, Ben, and I each work a 4.5-day week (excluding self-imposed overtime) and pay a cleaner to visit for four hours every fortnight. I returned to university lecturing when our daughter, Percy, was four months, and Ben looked after her for a half day each week, enough for him to avoid the “crap dad” caricature so many new fathers are cast in when they don’t know their way around a nappy bag.

At eight months he took over bedtime. He dresses her and bathes her. He does all the dishes. I can hear my mother’s whistling intake of breath. Cleaning, crafting and sewing on buttons weren’t part of my education, which was academic and achievement-driven, but she managed a career and three children with a husband who neither changed nappies nor boiled kettles. Why shouldn’t I? I know I am “lucky” on the domestic front, but I shouldn’t have to feel that way.

Not far into a casual discussion about The Home Stretch, Ben and I reach an impasse, our expressions hardening into disbelief at the imaginary life the other is leading. Both of us believe we carry out near constant tidying - of mess the other has created. We decide to swap chores for a week to get a better idea of what the other is up to.

Officially, I do the cooking, shopping and laundry. Ben does the washing up, bins, car, anything else that goes on outside the home, and bits of cleaning in between bimonthly cleaner visits. We’re both happy this is a roughly 50/50 split, albeit shamefully gendered.

On Sunday afternoon he says I really have to garden, as it’s the first nice day in weeks. I grumble, then enjoy a few hours outside raking leaves and playing with Percy. We come in from the cold to roast chicken. The next night he makes ramen while I order a “3 pack garden-scare cat-pest deterrent” from eBay.

Ben doesn’t cook often because that’s my domain and he’s lost confidence in the kitchen. When he does prepare a meal for me, it feels like the ultimate gesture of love. It is an event, though, and one evening (fajitas) he says he could do with me taking our toddler elsewhere while he cooks.

“Of course you bloody could,” I seethed silently as I carried her upstairs. “Who doesn’t dream of a peaceful kitchen?” When I cook I’ll be supervising a painting session, putting on a wash, unpacking the shopping and saving manky produce from our terrible fridge. But Ben feels he multi-tasks in the kitchen too, emptying bins and washing up while persuading Percy she doesn’t need to empty a litre bottle of bubble solution over the floor.

Emotional labour The average heterosexual British woman puts in 12 more days of housework each year than her male counterpart. That’s almost two-anda-half weeks of annual leave. I do not do these 12 extra days of housework a year, but I do believe I do more than Ben does.

I am the project manager of our lives, carrying the “mental load” made famous by French illustrator Emma in her 2017 comic You Should’ve Asked. I book restaurants and events and organise holidays. I schedule dance classes and swimming lessons. I worry about whether we can afford posh butter every week or should save it for special occasions. I carry this load because I believe I wear it better.

Broadly, emotional labour (keeping the peace at the expense of your own feelings) and mental load coalesce into invisible labour, the blazing volcano at the heart of modern womanhood, which spews out a free-flowing ash shower of requirements, demands, jobs, tasks, needs and wants.

Last week these might have included, don’t forget to buy a costume for World Book Day. Is it OK to buy a costume, because most look homemade? Is Harry Potter too obvious? Is it cultural appropriation if my white daughter is desperate to go as Moana? Hang on, is Moana even a book? Was it ever a book? Do the costumes have to be related to books? What is World Book Day even about if it’s OK to dress your child as Peppa or Forky? These anxieties are real, but Howard points out that they’re a performance of our femininity, of our desire to manifest successes on the home front. In my case, this is why I put biscuits on a plate and butter in a dish. This is heightened among mothers who have given up work and now run homes along the lines of their FTSE 500 former employer, such as the self-named Chelsea Yums group she meets, members of the 1 per cent, where stay-at-home mums are growing in number.

Much worse are the #tradwives, “a very successful fringe narrative that presents feminism as the source of all of women’s problems,” explains Howard.

Until we take the housewifeyness out of housework, it’s destined to be seen as women’s work. In past centuries, men who did domestic labour were so stigmatised they would do it at night time. Today we have a Prime Minister who isn’t sure he’ll change a nappy and a morning TV presenter who mocks men for carrying their babies. The Women’s Equality Party has put forward the idea of a “caring economy”.

Reid tells me if we invested just 2 per cent of GDP into the UK’s care structure, we would create twice as many jobs as investing the same amount in construction. “If we invested in our social infrastructure,” says Reid, “a huge burden would lift off women in the UK.”

What have I learnt from my chore swap? Everyone should do it. Also, I much prefer cooking to washing up. Releasing the mental load, much of which is self-inflicted, had a staggering effect on my work productivity.

Ben feels that I’ve seen my week as easier, because various things he does often haven’t come up. I’m aware of this, but the daily requirement of feeding your family has a different toll to other, less vital, tasks. I suggest we keep up the swap on alternate weeks for a few months. Ben’s not sure. Apparently I’ve been oblivious to some lights flashing in the car.

“And when they do,” Ben replies, “I fix them.” Oh sure. I’m hoping that next time I go away I don’t come back to an empty fridge and piles of laundry. It’s near impossible to say I’ll notice when the car needs filling up.

Think very carefully about your expectations around parental leave. The three hours added to domestic labour after having a child fall to women and that can lead to resentment quite soon.

Consider the effect on your children of seeing an underpaid foreign woman cleaning their home. Howard began to pay her cleaner a fairer wage, of £21.14/hr, then moved to making cleaning an all-family activity.

Go on strike. Choose your timings, and tell your partner and children the plan, whether it’s for them to feed and clean themselves for a day or a week, or learn to do all their ironing for ever.

FAST FACTS
KEY BOOKS
‘The Second Shift: Working Families and the Revolution at Home’, Arlie Russell Hochschild. First published in 1989, this looked at dual-career households and revealed that working mothers in the US put month of work a year more their spouses - and found 2012 that little had changed.

Revolution at Point Zero: Housework, Reproduction, and Feminist Struggle’, by Silvia Federici Written between 1974 and 2012, volume collects research looking at how women can escape household labour.