Women are socialised to bottle up anger, but they are tiring of complying. Two books out now show that rage is ripe for expression, writes Sophie Morris 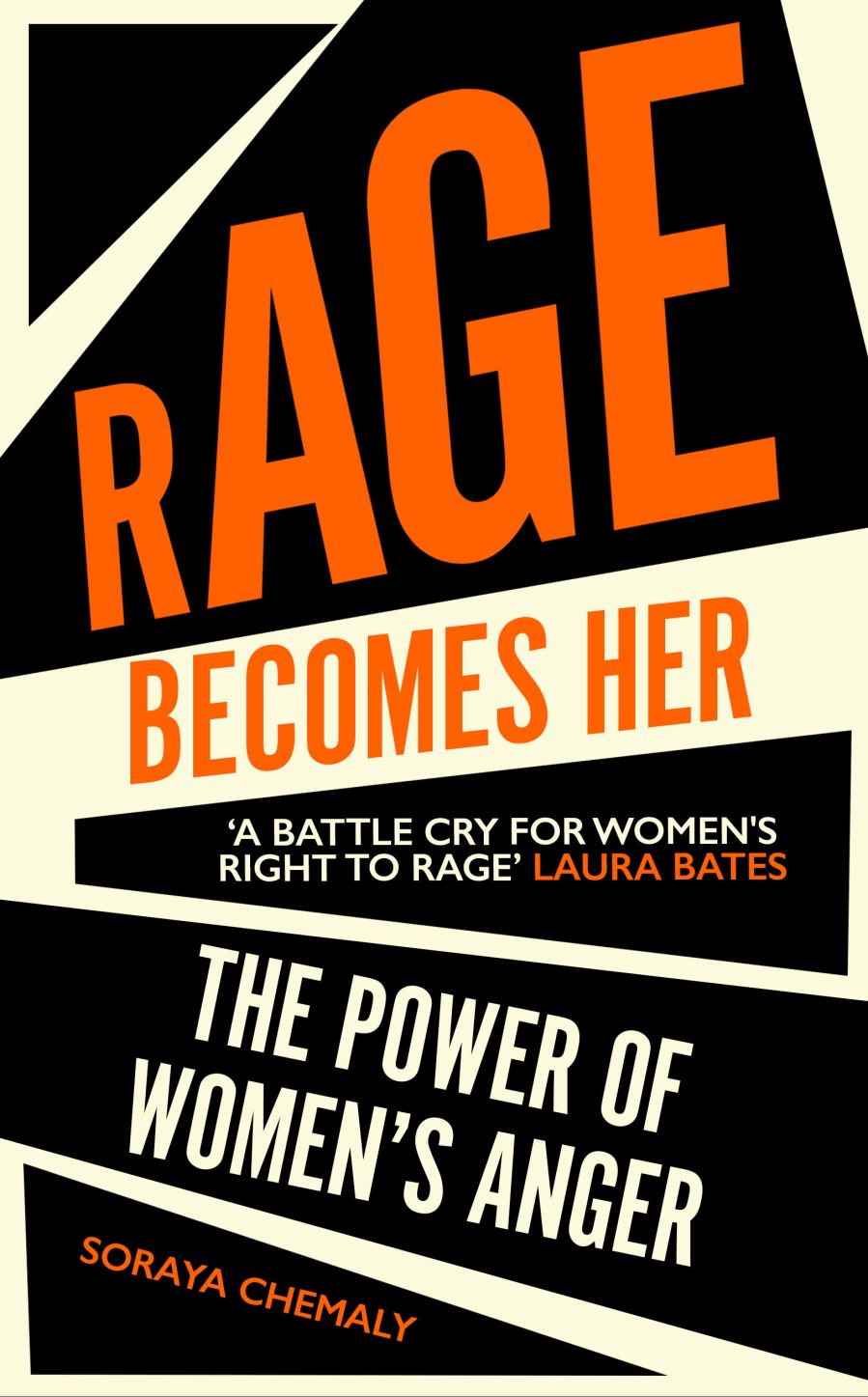 Not long ago a friend of mine shared a post from the website Daily Stoic on Facebook. It was one of those motivational memes designed to guide you towards a better existence. “Anger is not impressive or tough,” it said. “It’s a mistake. It’s weakness.”

“No, it’s sodding not,” I thought, along with many other much ruder and angrier things.

I am tired of being told that anger is wrong. I don’t mean aggression, or violence, but anger. I’m not alone. “Any time I talk about feminism, there is invariably somebody who pops up and labels me angry,” the author Chimamanda Ngozi Adichie told an audience at the think-tank Chatham House in London during the summer. “It’s as if a woman is not allowed to feel angry without being reduced to being only about anger.”

Women worldwide are tired of being told their anger is weak, wrong, misplaced, pathetic, shrill or silly, and they’re finding ways to express their fury. Let’s take the anger of millions of American women, who last month watched a man who was accused of sexually assaulting a number of women elected to the US Supreme Court. Is the fury of these women a mistake? Is Christine Blasey Ford (opposite page, above right), who testified about an alleged attack by Brett Kavanaugh, weak? She claims that she endured an assault in the 80s that left her “terrified” and “ashamed” for 36 years, as well as fearful of sleeping anywhere without an emergency exit. Was Ford’s testimony not the opposite of weak - impressive and tough? How about the singer Lily Allen? In her recent memoir, My Thoughts Exactly, she calls out her mother and her father for their hands-off approach to parenting, and the music industry for its treatment of young women. Should she have kept her thoughts to herself ? Was champion tennis player Serena Williams weak when she challenged an umpire? Should the MP Jo Swinson (left) have put up or shut up about the fact her maternity leave was disrespected during an important Commons vote about Brexit? She was furious, and she channelled that fury into reforming the rules.

Then we have Tarana Burke, the founder of the #MeToo movement, and Emma Gonzalez, the Florida student who addressed a gun control rally shortly after 17 people were shot dead at her school earlier this year. There are the Irish women who voted to repeal the abortion ban in their country; the 390,000 British women annually who experience maternity discrimination in the workplace; those mourning the one woman murdered by a partner every three days. Are these women all wrong to feel angry? Are they weak? I didn’t post any of this on Facebook at the time, because I didn’t want to seem angry, or aggressive, or combative - though I am all of these things. I didn’t want to appear shouty, shrill or bitter, all of which are characteristics a woman conveys using the same keyboard that makes men confident, passionate, powerful and convincing - trustworthy leaders rather than attention-seeking antagonists.

“If you’re angry, people punish you,” agrees Soraya Chemaly, an American who writes about what she calls “gender absurdities”. Her book, Rage Becomes Her, asks - angrily - why we aren’t allowed to be angry, and shows how powerful some controlled and considered anger can be.

“The studies are quite clear,” Chemaly says. “When women either display anger or are perceived to be angry, they lose credibility. They lose status. They lose confidence. Women of colour have to walk an even narrower path.

“What was so jarring to people about Serena Williams is that she didn’t walk that path. She was really mad. There was no doubt she knew exactly what was happening, both in the moment and after, when she said: ‘This didn’t work for me, but maybe in the future it will work for someone else.’” Early on in Rage Becomes Her, Chemaly tells a story about when her daughter was a toddler at nursery. There was a little boy who repeatedly broke the towers and castles her daughter was building. Instead of working to find a solution, staff praised the boy for his boisterous nature. Chemaly’s daughter took a quiet and noble stance, avoiding the boy. In retrospect, Chemaly feels she too took far too passive an approach to solving the problem.

“I think I set an awful example. My attempts to teach her how to avoid damage, live co-operatively with others and be a good citizen were gendered in unhelpful ways. She had every right to be angry, but I didn’t encourage her to express herself in a way that was public, disruptive or demanding.”

Sophie Walker, the leader of the Women’s Equality Party (left), says the same thing routinely happens in the UK. “British women are encouraged from a young age to suppress anger. Girls are taught to make themselves small, to be obliging, to smile and to look pretty. Young women who express anger are termed ‘feisty’ - a phrase men use for women and animals to mean brave in a way that doesn’t threaten their power.

“Women in the workplace are told they have been hired for their capacity to empathise and collaborate - a gender stereotype that effectively tells them they must not lose their temper. It’s a very effective way of keeping women in their place.

And it’s got very stale.”

Recently, Simon & Schuster published a second book about women’s anger, Good and Mad: The Revolutionary Power of Women’s Anger, by Rebecca Traister. She covers similar ground to Chemaly: both look at the groundswell of anger and frustration among American women since the 2016 election of Donald Trump, and consider the cultural history of women’s relationships with anger. It is interesting that a publisher considered there was an appetite for two books on the same topic at the same time.

“If I’d have proposed this book in this way three years ago, I don’t think it would have received the reception it did,” says Chemaly.

Neither book is a self-help manual. They are manifestos for diverting anger into progress. “What I have glimpsed,” writes Traister, “in the moments when I have let myself give voice to the deep, rich, curdled fury that for years I tried to pretty up and make easier on everyone’s stomach, is that for all the care we take to bottle it up, rage can be a powerful tonic. It is a communicative tool, which speakers and writers and activists not only find freeing, but which acts as a balm to listeners and readers struggling with their own subsumed vexations.”

This is important. When we bottle up our rage, it often comes up for air in the form of anxiety and depression. In August, the Children’s Society charity reported that almost 22 per cent of British girls were selfharming. If these girls were allowed to speak up, speak out and get angry, would they be happier? “Women and girls experience anxiety, depression, self-harm, eating disorders, a desire for body modification, and sexual dysfunction at substantially higher rates than boys and men do,” writes Chemaly. “Three themes run like underground rivers through all of these phenomena: self-surveillance, selfsilencing and suppressed anger.” The sort of anger we’re talking about is feather-spitting, plate-smashing, molar-grinding, hair-pulling fury, compounded by the fact that even when women are brave enough to speak out in anger, they’re belittled for doing so: laughed at, not believed, ignored.

Joeli Brearley remembers herself as “full of bile” when she set up the organisation Pregnant Then Screwed after experiencing pregnancy discrimination. Last month she held the first Pregnant Then Elected event, to help more mothers become MPs. Currently, 20 per cent of female MPs are mothers, although 40 per cent of women have children. “One of our aims is to end the motherhood penalty,” explains Brearley. “The only way this is prioritised is if you have more mothers in Parliament.”

Is this fair on women who don’t have children? “The worst name I’ve ever been called is Andrea Leadsom,” she jokes, referring to the MP’s gaffe during her leadership bid when she took a swipe at childfree Theresa May. “I’m not saying mothers are better,” says Brearley. “I’m saying they encounter specific barriers. Andrea Leadsom said they were better.”

Women in the US have also shown a ravenous appetite for political engagement. Within six months of the election of a man who listed “pussygrabbing” as a hobby, and since Harvey Weinstein and #MeToo, 20,000 women have put themselves forward for political office.

There has also been an 87 per cent increase in applications for a training programme for women wishing to run as Democrats. Krish Vignarajah and Kelda Roys, who are currently running to be governor of Maryland and Wisconsin, included footage of themselves breastfeeding in campaign ads, a sticky subject which has always excluded women from politics and the workplace.

Expressing your anger doesn’t have to mean running for Parliament, though. You could just talk to a friend about it or find the confidence to speak your mind on Facebook.

Although I didn’t have the energy for an online argument about Stoicism that day, I have been writing my own book about angry women - a novel. Telling people about it - and by that I mean men - invariably necessitates apologies and caveats to reassure them not to take any of this personally. Most of them, no doubt, think me a feminist killjoy.

I ask Chemaly if there’s a way to avoid the “feminist killjoy” label.

“It’s about how you become comfortable with what your anger might mean,” she offers. “We’re so socialised to prioritise the needs of others, it’s very hard to realise that we’re going to cause discomfort.

“People can get over that discomfort. We get over discomfort all the time.”

‘Rage Becomes Her’ by Soraya Chemaly and ‘Good and Mad’ by Rebecca Traister are both out now, published by Simon and Schuster FAST FACTS ANGER Anger is one of the seven universal emotions that are common across gender, ages and cultures, according to leading emotion researcher Paul Ekman. Anger, he says, can be the result of something interfering with us achieving a goal we care about, or when we experience or perceive something threatening to us, either physically or psychologically.