All My Puny Sorrows, Miriam Toews 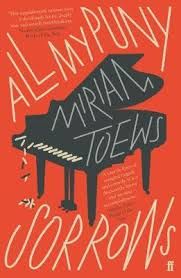 I finished Miriam Toews’ All My Puny Sorrows on my Arvon retreat at Ted Hughes’ grand mill house Lumb Bank, in Heptonstall and over the valley from where Mum grew up. At the end of the week we talked about blurbs, how they can work and what they’re for. I enjoyed it as before I’ve only looked at pitching to agents and editors, whereas as a journalist distilling something into a series of soundbites for the public is my specialist skill.

We talked about how we use blurbs. I choose books on recommendation, usually from Twitter, and reviews. I do go in bookshops and want most things in there, but often remind myself I have fifty on my to-read list at home.

One of the favourite blurbs in the class was from the tragic and lyrical All My Puny Sorrows, a novel Toews wrote after the suicide of her own sister, about two sisters who love each other. One appears a great success in life, she is trying to kill herself; the other thinks herself a failure, she is fighting to keep her sister alive.

The premise seems – is – simple. The blurb lays out the characters of the two sisters and their central challenge. This is the story, the heart of the book, the thing I have been struggling with for the past two years. At the heart of my book is families asking unreasonable things of each other, and never mind how emancipated you are still being entwined and trapped by love, loyalty, expectation, greed, power and need. See: not at all catchy, is it?

This was the theme of the whole week. What is your story about? It was determined pretty quickly that I had not enough story and way too much plot, which is interesting as I’d always feared having not enough plot. I’ve decided to plough on and do a new draft focusing on the story, but I’ll need to pull myself away from all the words I’ve written so far, which keep on waving at me from an old version.

All My Puny Sorrows has been on my list since I read Women Talking last year. Toews writes with depth and perspicacity while managing to sound as if she’s chatting to you as one of your great mates. There is a high incidence of suicide in Mennonite communities, even though it is the most shameful act within the religion.