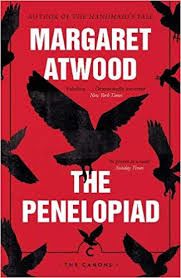 I have just started to read Circe – finally because I’ve been keeping it as a treat after loving The Song of Achilles so dearly and desperately. And so I realised that Circe’s most significant encounter was with Odysseus, the very same travelling strongman who Penelope spent decades waiting for, stitching and unstitching his father’s burial shroud each night to prolong his life.

Atwood imagines what Penelope went through to become his bride and survive on the bleak rock of Ithaca, waiting out twenty years as countless suitors came to claim her. Her husband finally returns and discovers her fidelity, in stark contrast to his own, as you’ll discover reading of his other adventures.

The story is one of her struggle and stoicism, but also of her twelve maids who are, eventually, slaughtered for their relations with the suitors, actions they carried out under duress and to protect their mistress. I.e.: they were repeatedly raped by invading suitors.

The story comes in Atwood’s crystal clear and deadpan voice, a flat tone which conveys no judgement at all and every criticism possible. I find I have an ongoing thirst for these retellings of ancient myths. They show us how much has been fought for and won, and how strong women can be.

Perhaps most interesting is Penelope’s recollection of her relationship with her cousin, beautiful Helen, who caused all this mess. She paints her as vain and selfish, unkind and unsisterly. I’m interested in what extent women are supposed to behave in a ‘sisterly’ way if they don’t wish to be called unfeminist, and how and why so many contemporary women are anti-feminist. After Circe I’ll probably head straight for Natalie Haynes’ A Thousand Ships, which was last night longlisted for The Women’s Prize 2020.