The Song of Achilles, Madeline Miller 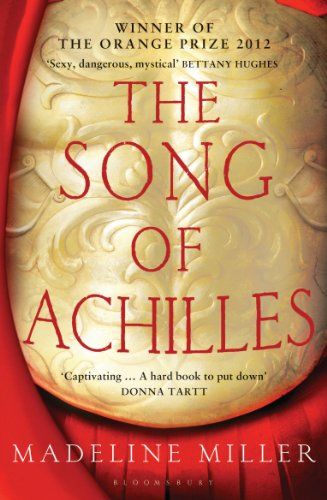 An epic end to an epic year of reading. Am I using the word ‘epic’ incorrectly? People often moan about that. The book is a genuine story of a Greek epic – the tale of the love between Achilles and Patroclus, and their part in the Trojan War. And my year of reading feels epic to me; it has felt like a very long time with unexpected highs and penetrating lows, impasses and breakthroughs, and a very strong thread of panic about it all being pointless because I should be using my time to write or to earn money. But hey – I’ve read a pile of great books!

I’m writing this while trying to fob Percy off with a bit of telly but she wants to play and is hanging off my chair. Yet I end on a high with this astonishing book, every syllable a pleasure, which has reminded me that it’s quality of reading I seek, and quantity will have to take a backseat to life’s other demands.

Maybe that’s part of the story: how you can be a writer with a pram in the hallway, but you can’t be a writer and a reader and an earner. This challenge brought me great joy in the volume of words I’ve read, but a glum sort of surprise in what I didn’t get through. I thought I’d plough through new releases, old favourites, get really deep into a few writers, and encounter a few surprises. I’ve managed a good few new and recent releases, and a few classics, but the time to get deep into one or two authors has eluded me. I have read more than one book from a few authors: Meg Wolitzer, Shirley Jackson, Deborah Levy.

Looking back there are more female searching-for-myself memoirs than I remember, including Levy, Bryony Gordon and Cheryl Strayed’s Wild. They came highly recommended and I know that I try to find kinship in these stories, and they comforted me when I needed them to.

I cannot decide whether the number of books I’ve read about women thinking about being women is, well, too many, or as many as might be expected from a new wife and mother reading women and writing a book about women: Crudo, I Love Dick, Dept of Speculation, When I Hit You, Heartburn, The Wife, The Days of Abandonment, Self-Help, The Cost of Living, Outline, The Female Persuasion….and more. I’ve found that I want more story than I thought I did, over introspection, and that there are many different ways to approach an introspective first person story.

I haven’t read any books I didn’t like, most have been brilliant. There was only one I didn’t finish, Sight by Jessie Greengrass, and I’m 99% that was more to do with me than the book as when I look at the others I was reading at the same time I found them all a bit of a struggle, so I’ll go back to Sight in January. One of my least favourites was one of the bestsellers of 2018, so that shows what I understand about mass appeal, but we already know that.

It is hard to pick favourites. I’d say Idaho by Emily Ruskovich is up there, read feverishly while recovering in a damp room from appendicitis and writing a few thousand words a day, convinced this would be the start of the end of the first draft of my own novel I’d send to publishers. It’s now December and I’m about to start a second draft, but I have what I didn’t have back then: a readable story.

After NW and Swing Time, Zadie Smith is now one of my favourite writers, whereas before I’d given her a wide berth because of my own stupidity. It was the second choice of the new book group I joined in Thanet, the Isle of Death reading group, and we all agreed we hadn’t read Smith past White Teeth mainly because we thought her too popular, and we were all suitably awed and shamed.

Other highlights were Olive Kitteridge, History of Wolves, Sing, Unburied, Sing: my appetite for bleak American drama knows no bounds. Meg Wolitzer’s The Wife and The Female Persuasion are both so so funny, such issue-led page-turning sagas, this is a style writing I really aspire to, aspire to in that I can find kinship in its style in a way I’ll never be able to with Elizabeth Strout or Shirley Jackson, as much as I adore them and wish I could write like them.

Like everyone else, I devoured Normal People in a few hours. Oh, and Milkman! Loved it. Lot of fecking words though.

Early on I realised I needed to include some of the non fiction I was reading, especially two hefty releases from American feminists, Rage Becomes Her by Rebecca Traister and Good and Mad from Soraya Chemaly. Another was Why I’m No Longer Talking to White People About Race by Reni Eddo-Lodge, which is the only review I haven’t written yet. I was too slow and left it too long, to the point where I feel I can no longer do it justice. I had also intended to post it to Facebook, as Eddo-Lodge says that white people don’t need to ask her what they can do about racism, but ask their white friends what they’re going to do about racism.

I also haven’t reviewed a friend’s work in progress which I’ve read a few times and spent a good amount of effort on. As well as being brilliant and sure to get a book deal soon, it’s taught me so much about structuring my own story that it was worth every second.

It is here, with my face in a new book (Thirst by Kerry Hudson) that I need to admit that my task was impossible. I didn’t ever want to read 52 books, I wanted to read ALL of the things, and REMEMBER ALL OF THE THINGS. And I can’t. There is so much back-slappingly fantastic writing out there I’m never going to even hear about, much less read for myself, so I need to cherish the reading I am able to complete. This past year has included a lot of cherishing, but also lots of begrudging because I set myself too strict a challenge, and I found there were some things I refused to give up to make more time for reading. For example I watched much less tv, but I still watched some, and I like watching tv with my husband. I also didn’t give up drinking or cooking, both of which are very time-consuming activities.

One great big FAIL from this experiment is that I haven’t made any substantial progress on reducing my phone use. I have to leave it out of reach not to use it, and I waste a lot of time when I could be reading, scrolling, and then lots of time after that wondering why my life isn’t as amazing as the people’s I scrolled through. I have had some success with temporarily deleting or deactivating accounts, but I genuinely can’t do my job without these tools, so I need new ways to control their impact on me.

One of the aims of this challenge was to give my brain something to cling onto, a connection to the ritual element to life which we know makes the days and decades easier to navigate, whether your thing is lighting candles at altars, meditation, or a 3pm cup of tea and a biscuit. I have learnt that it was also trying to fill a space, to return to the ‘before’ me who wasn’t a parent, but that’s somewhere I can never revisit, even at the bottom of a second Martini.

But bloody hell, Song of Achilles. That’s the right way to live and to die and to read and to end a year.