A feast for the ears

Singer Jessie Ware - and her mum - are among those feeding a growing appetite for food podcasts. By Sophie Morris 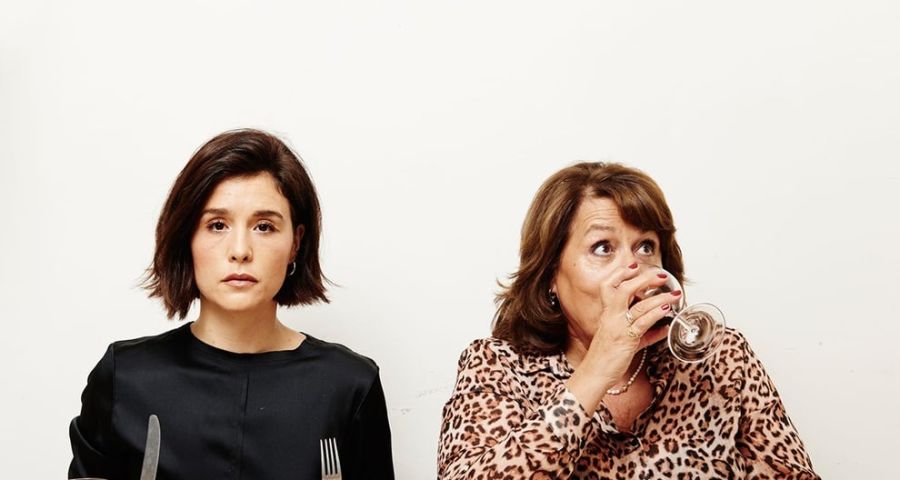 When Cheryl Cole was booked for the Table Manners podcast, the host, singer Jessie Ware, was planning to make chilli beef brisket and buy in a pud from M&S. Then her Mum got involved, criticising her 35-year-old daughter’s “standards”. Lennie Ware got to work making a key lime pie. As Jessie’s co-presenter, she had every right to meddle.

This loving but combative style of the mother-daughter combo, along with frank chat from starry guests including Neneh Cherry, Kiefer Sutherland and Alan Carr, have made Table Manners a hit. Since 2017, 80 million episodes have been downloaded.

The success is somewhat chicken and egg. Or should that be chicken and matzo ball soup, which Lennie used to cook for Jessie’s friends at Friday night dinners when she was growing up? Those dinners led to their current collaboration, though Jessie now brings only one of her famous mates to her mother’s dinner table-cum-recording studio each week. The podcast takes the format of a friendly family dinner. Both Lennie and Jessie cook for a guest, wine is taken and boundaries dropped.

Table Manners has won Jessie a new audience and, after three albums, a different sort of publishing deal. She will release a new single tomorrow, but next week brings the launch of her debut cookbook, which will be followed with a live tour. The book will share the most popular recipes from the podcast, including the sausage and bean casserole simmered for Ed Sheeran, the drunken crouton and kale salad they served Yotam Ottolenghi, and the blackberry and custard tarts created in honour of Nigella.

It follows the trend for accessible, casual at-home dining, the sort perfected by Diana Henry in From the Oven to the Table and Alison Roman in Nothing Fancy.

Food programmes have long been a draw for TV viewers, making chefs into household names. And foodies have spread like a rash on Instagram, making the most of the visual appeal of cooking. Food podcasts are a more surprising development, relying as they do on words only. But it turns out that listeners love them.

The food podcasting landscape is as competitive as any kitchen, and presenters come from the worlds of comedy and entertainment as often as the food industry and media. Here are some of our favourites: Honey & Co: The Food Talks In 2017, Sarit Packer and Itamar Srulovich, chefs at the London cafe Honey & Co, began inviting their food world friends and colleagues to share their secrets. The couple (inset, top) cook Middle Eastern food, but the variety of high-calibre guests reflects their wide tastes, thirst for food knowledge and standing within the industry.

The current series, Who Run the World? celebrates the achievements and stories of women working in food. Tune in to hear from the founder of Ireland’s Ballymaloe Cookery School Darina Allen, Great British Menu judge Andi Oliver, food editors and writers Lisa Markwell and Fay Maschler, and the legendary cook and writer Claudia Roden. Sarit and Itamar record each episode in front of a live audience, so if you’re in London look out for the live dates on their website. The final episode will air on 8 March, International Women’s Day.

The Olive magazine podcast If you’re a grazer on small portions rather than a full-on sit-down dinner kind of a podcast listener, then this is the show for you. Hosted by Olive magazine food director Janine Ratcliffe, many of the episodes come in at under 20 minutes. Subjects range from foodie travel advice and interviews with chefs to explainers on ingredients such as vinegar, sake and goat.

The Food Programme podcast So much food broadcasting is strictly feel-good, but Radio 4’s flagship food show manages to celebrate the wonderful things about the food world (Mary Berry, ice cream, brewers and farmers) and explore questions of contemporary culture (Is the dinner party dead? Do tinned foods have an image problem?) without shying away from important investigations (the future of meat, obesity, food additives).

It’s been on air for 40 years but before the podcast era, fans had to wait until Sunday lunchtime for their weekly hit. Doyenne of the show is Sheila Dillon, who presents along with Dan Saladino.

The Splendid Table This long-running show from America’s National Public Radio can be considered the US version of The Food Programme, but is 50 minutes long and is on the more serious side of cooking chats.

That said, it is a glorious waltz between the many, many food cultures of such a big country, steered by the safe hands of journalist Francis Lam, and a great entry point to eating across the pond.

Favourite Recipes from BBC Good Food If you’re a fan of the chef Tom Kerridge (below), score an extra helping of him on the BBC Good Food magazine’s podcast. The show sticks to one food or theme per week, and before Christmas, Kerridge was investigating pies, puddings, pumpkins and potatoes.

The Kitchen is on Fire Restaurateurs James Ramsden and Sam Herlihy are the owners of Michelin-starred Pidgin in Hackney and fancy sandwich bar Sons & Daughters in King’s Cross.

Veterans as podcasters go, they’ve been recording their friendly banter and restaurantworld musings since 2014, with help from cult industry folk such as St John’s Fergus Henderson, outspoken restaurateur Gary Usher, and Tim Siadatan, the man behind Padella and people queuing for hours for a £6.50 plate of pasta.

Off Menu As with Table Manners, Off Menu is a food podcast where non-food professionals - how dare they - line up for a slice of the food world pie. Ed Gamble and James Acaster are comedians and their roster of guests might include a chef or food writer here or there, but they mostly rely on their comedy contacts, making the show more hijinks than fine dining, and all the better for it. Recent guests include This Country’s Daisy May Cooper, Joe Lycett, Armando Ianucci and Katherine Ryan.