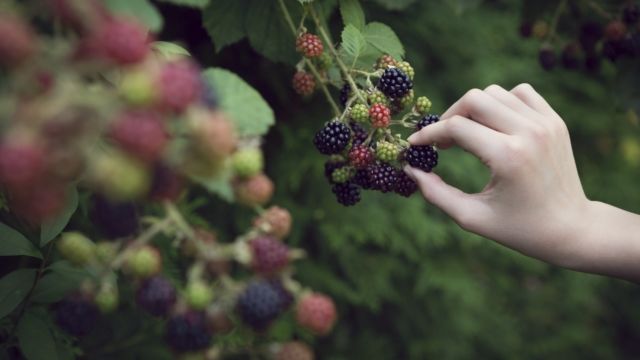 Most of us recognise the fruit sold in supermarkets as the pick of the crop, a beauty contest to which the ugly sisters have been denied entry, destined instead for jam or pig feed. But Lebo digs much further than imperfection, offering an A-Z of the most troublesome fruit she can find, summed up in her subtitle as “the Tart, Tender, and Unruly”.

Aren’t blackberries a juicy gift from late summer walks? Not so in North America. “Blackberries are invasive,” Lebo explains. “Huckleberries can’t be farmed. Medlars must rot in order to sweeten.

It would be a shame if this book didn’t attract readers without an existing curiosity in the subject, because Lebo brings as generous an eye to its broader topics - relationships, reproductive health, illness and death - as she does her fruits and their histories and uses, their beauty and their terror.

One, the Osage orange, is known as “trash fruit” where it grows, in America’s Midwest. Lebo is delighted to discover and pay money for a bag, although they are inedible, useful only for repelling spiders or piling in a bowl as a “cute holiday decorating idea” endorsed by Martha Stewart.

In an era of global food monopolies, it can be hard to know when strawberries are in season or where quince, vanilla and courgettes are from. Lebo lives in Spokane, Washington, in the north-west of the United States. She can drive to a local Asian grocer to pay over the odds for “sensationally stinky” durian, the fruit most people think of first when she tells them about the book. But gooseberries are “a rare find and carry with them a mythology from elsewhere, a vague sense that they are a fruit One Should Know, perhaps from Literature”. She takes them to cocktail parties as a curiosity, but only in July, when there is a local season of a few weeks.

Given the laboriousness and in some cases dangerous nature of the recipes (stone fruit kernels contain small amounts of cyanide and can be toxic to children), they are more like guides and curios than direct routes to pudding. She points out that you can skim them without spoiling the reading experience, but her toil over several types of plum, and finding a use for the “boring brown syrup” of medlar paste, certainly added to mine.

The plums - a fruit most of us think of kindly, even longingly -

bring memories of managing to leave a terrible relationship with “W”, a man more difficult than any of the fruits. She gives him the news on his return from a band practice. “He said he was going to get famous and I wasn’t going to be there to see it.”

Cookbooks have always lent themselves to personal stories. Here, Lebo shares fragments of her life, managing to hop to and from topics as she grapples with new fruit as well as moving towards a crescendo.

Pain is a constant: she watched her mother suffer migraines, and she has inflammation and ulcerative colitis herself. Investigating strange fruits is one way the author convinces herself that she is looking forward - “a way to look for a cure when I don’t know how to cure myself. I know these berries aren’t magic. I know they aren’t medicine. But I feel better.”