Bloody marvellous: how we fell in love with rare meat 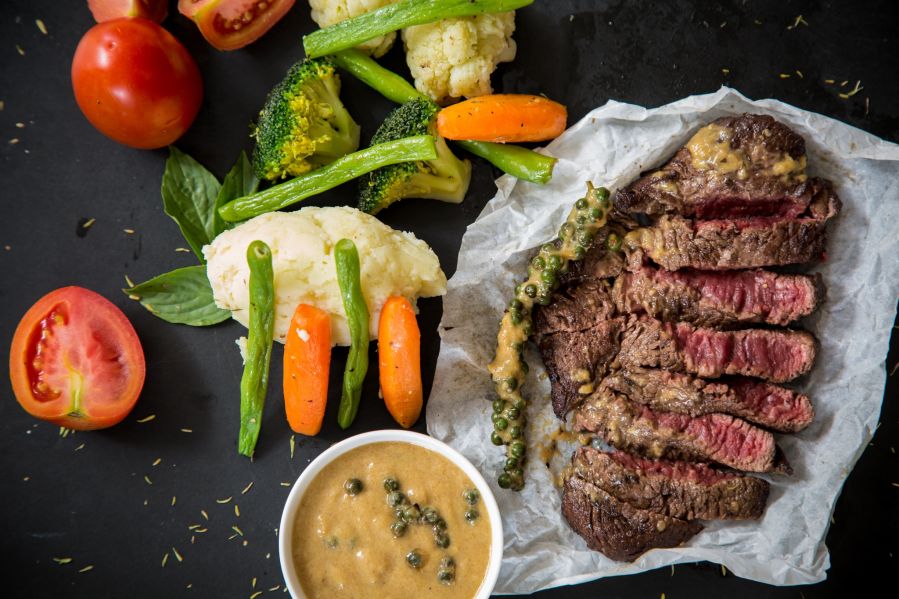 British ribs, racks, joints, chops and steaks – national treasures each one of them – have changed their colours. Whereas 20 years ago, many people would have baulked at the prospect of consuming bright pink meat, today, settling down to a steak dripping with bloody juices seems perfectly normal to most of us.

This wasn’t always the case. The French have nicknamed the English ‘les rosbifs’ since the 18th century precisely because of the way we like our meat; historically, a big joint of beef roasted all the way through was always preferable to a bloody piece of meat. Dorothy Hartley, one of the best and most admired disciples of traditional English food, advocated that meat was to be cooked until it was brown. Boiled beef was “excellent” she said, a sirloin should be roasted “entirely and perfectly”, and steaks should be cooked “till done”.

Hartley’s Food in England was published in 1954, the year meat was derationed. The British were looking forward to the return of the traditional Sunday roast, yet they were unlikely to serve it pink. “The idea of a bloody joint of meat did exist in the 1950s,” says food-science expert Dr Morgaine Gaye. “But those who preferred their joint bloody may have been perceived to be ‘devil may care’ types, who weren’t confined to the traditional thinking of society at the time.”

While it is difficult to pinpoint the precise time when the British attitude towards eating rare meat began to soften, it is a relatively recent shift. “The idea of E.coli and parasites in uncooked meat prevailed well into the Eighties and Nineties for most people,” says Dr Gaye.

Today, according to the cookery bible and reference book Larousse Gastronomique, the French and the British still cook their roasts slightly differently. In Britain, the meat is “pink and very tender inside”; in France the roast is “inside a little bloody, the rest of the meatpink”. But the gap is closing – we are serving pinker meat, tending towards the rare.

Huw Gott opened the London steakhouse, Hawksmoor, in 2006. “The trend of eating rarer meat is part of the more general shift from food as fuel to food for pleasure,” he says. “Eating roast beef, a steak, and even a pork chop, is more pleasurable if they haven’t been cooked too well done.”

Gott’s business would not be thriving were Britons not happy to consume rare rumps, fillets but kissed with the sear of a smoking griddle and burgers that fall rudely apart to reveal rosy, unctuous middles. The Hawksmoor restaurants (there are now three of them) have played a notable role in transforming the reputation of rare meat in Britain. Bloody steaks and hunks of beef are the hottest meal ticket in town, and knowing the difference between your Chateaubriand, your 55-day aged rump and your prime bone-in rib marks you out as a true cognoscente.

Steak and burger houses have become the restaurateur’s dream ticket. Gaucho, Goodman and Byron are all shifting platters of pink meat as if it was just how mother had made it, which it most certainly isn’t. Meat lovers with the deepest pockets like to be seen at upmarket new London steak joints such as Wolfgang Puck’s CUT and Richard Caring’s 34. At the other end of the spectrum are the six-quid burgers at Meat Liquor in Soho, which started life as a food van and peddles the hippest meat patties outside of Brooklyn. The Meat People has just opened its doors in Islington and this summer STK House, a fashionable New York franchise, will launch in central London.

But for plenty of consumers, the fear of falling ill from undercooked meat persists. In 1998, the British Medical Association warned that all raw meat should be considered contaminated and the BSE crisis of the 1990s trundled on into this century. British beef exports were branded ‘high risk’ until 2004. Perhaps the new rush for steak and burgers is a sign we have finally buried our fears. Either that or the trend has been skewed by a generation too young to remember mad cows.

Meat is certainly vulnerable to contamination if it is not stored or handled correctly, but food contamination can happen at any point in the preparation process: in a farm, factory or home. In England and Wales in 2010, 84,560 cases of food poisoning were reported to the NHS, but there is no breakdown to show what proportion of these were triggered by undercooked meat. Last year’s biggest E.coli outbreak, which killed 11 people in Germany, was caused by salad.

It is now widely accepted, certainly in culinary circles, that rare meat is safe to eat if it is of the right quality and handled under strictly-monitored hygiene conditions.

None the less, Westminster Council intervened, on health grounds, in the way that the upmarket chain Byron prepared its rare burgers in the capital last year. Gourmets complained about the antediluvian attitudes of the authorities, accusing them of trying to stymie Britain’s emergent reputation as a gastronomic hotspot.

Yet the truth, it turns out, is that most beef is best done medium-rare rather than rare. “There are lots of foodie types who have long been told that the ‘proper’ way to eat steak is as bloody as possible, and that anything else is a travesty,” says Gott. “We disagree. Usually a tasting will persuade people round.”

According to Gott, a touch more cooking, even for very lean cuts, helps to break down the meat’s fibres and thus improves taste. This is confirmed by the food-science writer Harold McGee, who in On Food and Cooking: The Science and Lore of The Kitchen argues, “Raw meat is tasty rather than flavourful. Cooking intensifies the taste of the meat.”

Our taste for pink meat is not just restricted to the capital. Gaucho has restaurants in Leeds and Manchester and fancy cuts of beef and posh burgers feature on gastropub menus from Skye to the Scilly Isles.

Manchester restaurateur, Steve Pilling, owns one such gastropub, The Red Lion, which he considers a research and development base for his next project, a 450-capacity Roast Restaurant and Oyster Bar in Manchester’s Spinningfields. He says that most customers request medium-rare, with a few – “probably those who know less about food” – asking for it well-done. “The rare brigade have always eaten rare meat, but they are quite a small crowd. But over the past 10 years there’s been something of an epicurean evolution, and the bar has been raised much higher in terms of quality.” Gastronomically speaking, serving rare meat makes a statement about its provenance, too – if it’s going to be eaten rare, it’s got to be good quality to start.

Fish and seafood are getting a makeover, too. Forget the batter and the deep-frying – it’s about perching at a bar to shuck a Maldon native oyster, or picking daintily at a plate of carpaccio or a bowl of ceviche. Raw fish is most often associated with Japanese cuisine in the form of sushi or sashimi, but carpaccio, an Italian term for very thinly sliced fish or meat, is now becoming as common as spaghetti carbonara. Ceviche, a marinated fish dish from Peru, is also being assimilated into the British dining-out diet. In late 2011, two ‘raw bars’ opened in London, one at Gordon Ramsay’s Bread Street Kitchen, the other at Wright Brothers Soho Oyster House. At the former, you can order fillet of stonebass, salmon ceviche and octopus carpaccio; at the latter you can dine out on utterly uncooked winkles, whelks and clams.

Raw bars come to us not from Japan or from France, but from the US, where steak tartare has never been such a stomach-flippingly fraught prospect as it is for us Brits. Dr Gaye says that a food cannot really be considered mainstream until it’s in the supermarkets, as sushi has been since 1995, when Waitrose began to stock some. “A large majority of Britain wouldn’t know what steak tartare is, or carpaccio or ceviche,” she says.

So, the dangers of eating raw meat are well-publicised, but a recent study found that overcooking meat was also a risk, doubling the odds of developing prostate cancer. “The raw food movement is becoming better known,” says Dr Gaye. “The idea that raw might mean healthier, cleaner and better is a trend which we are very much embracing as a nation.”

Beef is not the only meat to divide the opinion of otherwise happy dining chums. MasterChef judges Gregg Wallace and Michel Roux Jr had a mini-spat in the latest series of the top-rated show, when Michel Roux Jr opined that a piece of lamb should have been even pinker than the oozing cerise slab on the plate. Gregg Wallace, a true Brit to his medium-well centre, disagreed.

Chicken, you’ll doubtless be relieved to hear, is still safe from advocates of the raw, the rare and the potentially disease-carrying, despite chicken sashimi being relatively commonplace in Japan. Pork, on the other hand, is not. Cured hams and sausages of all types have been popular for a while, but mention rare pork and you’re likely to be met with a gasp, if not the sound of gagging. Yet, on the menu at Eyre Bros, an Iberian restaurant in Shoreditch, there’s a fillet of pork which is recommended medium-rare. It comes with a proviso. “Don’t try this at home with regular pork,” warns chef and owner David Eyre. “This is acorn-fed Iberico pig, which is much more like a wild boar than a pig. Any intensively-reared meat, including pork, must be cooked through.”

“Some people will try anything which seems new, cool and untasted,” says Dr Gaye, though she adds “certain demographics will never eat any raw meat.” That may be so, but they might soon be in the minority.