Britain is taking on Europe’s finest producers of cured meats with delicious results, offering produce at markets and in restaurants around the country. By Sophie Morris 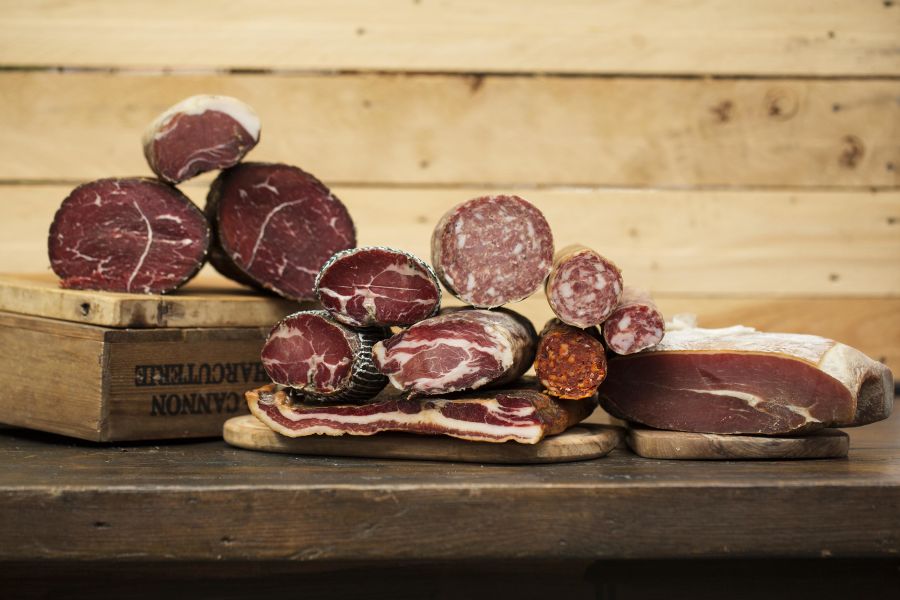 When you hear the words “cured meat”, does your mouth water as much as when you think of charcuterie? The French word sounds so much better, perhaps because we don’t expect cured meats to be British.

We know that chorizo and jamón is from Spain. Italy has given us salami, prosciutto, bresaola (and the rest). The range of traditional French charcuterie stretches from spicy saucisson and jambon de Bayonne to rich pâté, unctuous porky rillettes, and beyond.

The UK does have a history of producing cured meats, but the legacy has been rubbed away over the years. Too many links have been broken, and there are very few families or businesses where the tradition has been passed down through generations, as you find in the rest of Europe.

In her 1967 introduction to Charcuterie and French Pork Cookery, Jane Grigson wrote that British pigs were getting too skinny for the fatty delights she was writing about. “I hope this book, in some degree, will contribute to reinstating the pig in its variety in English kitchens.”

But British charcuterie, fuelled by the boom in artisan food production, is now enjoying an astounding period of growth.

Many “garden shed” producers are now selling to the public, and last year more than 400 products by 100 producers competed for attention at the Cured Meat Festival and British Charcuterie Live at Blenheim Palace. We spoke to some of them to hear what’s behind the boom.

TO MARKET, TO MARKET
For Sean Cannon, charcuterie is an exciting area because there are 10 times as many producers today as there were in 2010, when he started selling British produce from his Norfolk market stall, under the name Cannon & Cannon.

There was so much demand for his salami, coppa and bresaola that he was soon doing 15 farmers’ markets, including London’s Borough Market, and racing around the city in the evening, delivering to eager restaurants: smoked duck breasts and lamb merguez salamis from Trealy Farm in Monmouthshire, or pork, cider and seaweed salami from Bude’s Cornish Charcuterie. He was building a salami army of British cured meat producers.

Cannon, 37, then opened Meat School (the second Cannon, his brother Joe, went back to his “real job” as the business expanded) where his students were handed blowtorches on arrival and instructed to blast the hairs off their animals. “Not something to do with a hangover,” he jokes as he shows me round his new processing facility in Bermondsey, which he hopes will allow him to bring British charcuterie to the next level.

PRICE VERSUS PROCESSING
Cannon wants to take his meats to a larger audience, but he’s never been able to supply supermarkets because it’s impossible to get near the foreign producers on price. For example, a 90g packet of Milano salami costs £2.10, while Cannon & Cannon’s 60g packets of British salami are £4.50.

“The reason you can go in any supermarket and pay £2.99 for some French ham is the processing,” he says. “You have to have a safe facility for slicing, the product has to be uniform, you have to pack it, seal it, brand it, shop it… Until this point we’ve been a merry band of artisans with an incredible range of products.

“We were doing too much and started to think about what our role was,” he explains. “What were we trying to do with British charcuterie? There was clearly an interest.” Cannon says there are 200 producers now, compared the 20 he could choose from when he started out. Although his company does not produce anything itself, it trumpets its producers on its website, and when you buy something you know where it has come from.

That might be John Doig of Moons Green, near Tenterden in Kent, who creates chilli-fired “beer sticks” (think posh Peperami to enjoy with a pint) and saucisson flavoured with wild fennel and garlic or mushroom and truffle. Or it could be Tempus Charcuterie, co-founded by Dhruv Baker of MasterChef fame, which only makes products using prized Large Black pigs.

The plan now is to install machinery that will enable Cannon & Cannon to process products more efficiently. It recently cut short a crowdfunder after finding investment to cover the purchase of the huge machine needed to do the job.

Cannon and his colleagues remember their research trip to Germany with glee, pointing out that Germans eat sliced meats almost three times a day.

HOT STUFF
Charcuterie can be cooked as well as cured, as many of the French products are. While the new wave of British curing is a homegrown take on continental-style air-dried meats, made with our outstanding livestock, more traditional varieties include bath chaps (pickled pigs’ cheeks), black pudding and corned beef.

MICHELIN-STARRED MEAT
Adam Byatt owns the Michelin-starred Trinity restaurant in Clapham, south London, and is proud of his house-made charcuterie. About five years ago he tasked his trusted sous chef Chris Bolan with developing it, and even though both are very experienced cooks, they felt they were starting almost from scratch.

“We spent two years making loads of mistakes,” remembers Byatt. “It’s a long process. When you start something you don’t see the benefits for four or six months, so you don’t know whether you’ve made mistakes until the end.”

“There’s not much information out there,” says Bolan. “Once people have got to a point where they’re making something really good, they generally don’t want to give away their secrets. We probably have the best livestock in Europe. The reason we don’t have a history of charcuterie is that we didn’t need to preserve it in the same way. We did salt pork and cure meats in certain ways, but we didn’t have the same need as Italy and France. That’s why you don’t see charcuterie in other cold countries, like Scandinavia.”

Today the plate they’re shifting “tonnes” of is a beauty. There are long strips of melting scarlet duck ham, French magret duck breast with its generous border of fat which has been sweet-cured, air dried and sliced thinly; the lomo - Spanishstyle cured pork loin - is blush pink and salty; there are firm slices of ruby bresaola brined in red wine; and lardo picante, pork back fat cured in salt and spices and sliced wafer-thin to smear on toast.

Bolan is working on about 18 types of charcuterie, including coppa, salami, saucisson, prosciutto, guanciale and pancetta. Both men agree though that the holy grail is Spain’s ibérico bellota ham, from free-roaming acorn-fed Iberian black pigs - 65g of this costs £10.99 in Waitrose.

A BIT OF AN ANIMAL
Although Bolan is proud of his own cured meats, he says the British cannot come near bellota because the Spanish won’t sell us their pigs.

Byatt predicts we’ll find a way around this. “On the Continent they have a culture of salting, fermenting, curing sardines, capers, olives, anchovies, tuna - it’s not that far removed from curing meat. We don’t have that culture, it’s new to us. But we’ll see a huge growth in this area over the next 10 years.”

The bible, if you want to try this at home, is probably still Grigson’s book, which was reissued in 2001 and has been reprinted most years since. “Of all charcuterie,” she writes, “easily the most rewarding to make is salt pork. Everybody nowadays knows about pâté, but produce a hot, glazed joint of salt pork, and you cause a sensation.”