The Catalan feast guaranteed to warm up your winter

Catalans liven up the colder months with a deliciously messy celebration of their sweet and juicy calçots. Sophie Morris dons a bib and dives in 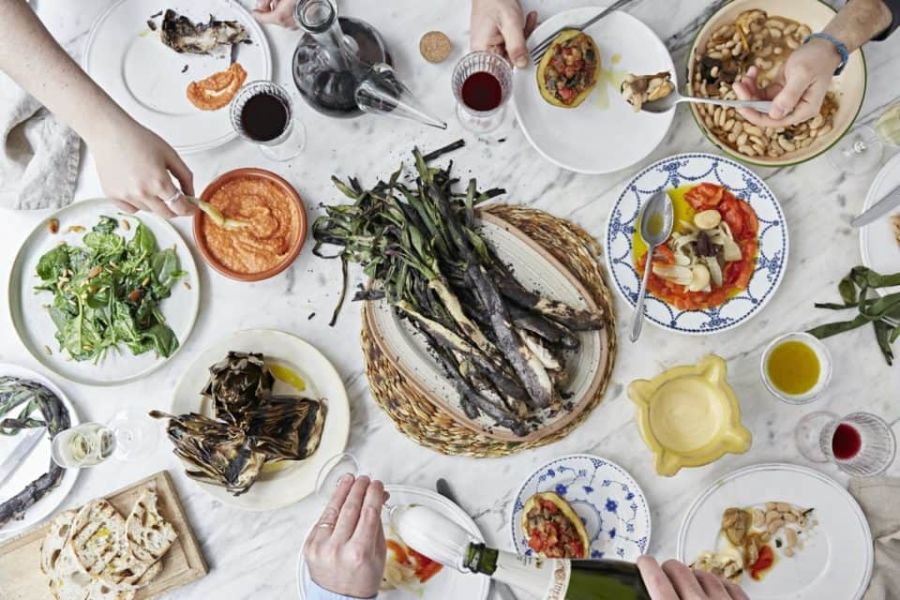 A calçotada at Brindisa restaurant in London, Steven Joyce

A calçotada with a group of strangers is a direct route to shedding inhibitions. You’re outside, breathing the dry, cool air of a Catalan hillside village in winter, getting to know the locals while sporting an oversized paper bib. Your face is painted with scraps of burnt onion skin, smears of oily, tomato-y romesco sauce, and your mouth is open as wide as it will stretch as you stoop to catch the flow of red wine streaming down your throat from the jug.

An important festa in the Catalan calendar, and a way to get through the long winter months, the calçotada lures Catalans out of their homes all over the region, though Valls near Tarragona is thought of as the best place to experience one. It’s essentially a massive communal barbecue where overgrown spring onions - the calçots - are grilled over hot coals until charred and crispy, dipped in sauce, and washed down with plenty of wine straight from a porrón, a jug with a long spout so you can pour the reviving tonic directly into your mouth.

Calçots, the onions cooked at a calçotada (pronounced cal-shota-dah) are native to Catalunya. If you can’t make it out there before March or early April, when the season typically runs to, a number of restaurants over here have been putting on their own barbecue to share the tasty fun.

One of these is Brindisa, which has been holding calçotadas in its Shoreditch and Soho restaurants in London for a number of years, throughout February and March. “The calçotada is a messy affair - it goes beyond celebrating a vegetable, it’s part of our heritage,” explains Brindisa Kitchens’ executive chef, Josep Carbonell. “Great fires are lit, long tables are set outdoors and bundles of calçots are piled onto the flames as we feast and drink into the night. It’s quite the performance, with grandfathers skilfully pouring porróns straight into open mouths, and hanging calçots dripping with romesco sauce.”

The onions themselves are something between a large spring onion and a small or young leek. They are a very mild allium, and are sweet and juicy. They were on the menu as tapas before Brindisa launched its calçotadas, explains Carbonell. “But it was incredibly difficult for us to source a large quantity of the best quality, so we’d just do tapas specials with them. We always had incredible feedback from our customers who’d never heard of them, let alone eaten them before. I grew up celebrating calçotada with family and friends and seeing the response to calçots, I knew I had to bring it to the UK.”

The romesco sauce is made from peppers, tomatoes, nuts, garlic, vinegar and olive oil. You’ll find it throughout the year served with grilled fish or meat. At Brindisa you’ll eat the romesco-dipped onions with Catalan white beans, sausages and grilled vegetables including globe artichokes.

“As the festival is so connected with the landscape and agriculture of my region it is important to me that we source and bring all the vegetables we use from Catalunya to London - the calçots themselves, the artichokes, the peppers, the tomatoes.”

Carbonell grew up in the town of Gave near Barcelona, which is well known for growing vegetables. “My mum used to make calçotada every year,” he says. “We’d all go to our small farmhouse in the countryside at the weekends and celebrate together using produce from our own land.

“My job when I was little was to help pick all the nuts for the romesco sauce - my family had hazelnut and almond trees. We’d all sit around peeling and shelling the nuts, ready to be pounded into the sauce by my mother. Of course, we all got involved with lighting the huge fires to cook the calçots - we’d use vines from our land as they make the big flames needed. My father used to make a grappa liqueur from the grapes.”

Although his UK calçotadas initially attracted Catalans and Spaniards eager for a taste of home, now they’re popular with all types of food lovers. They are also promoting a vegan menu this year.

Catalan food expert and Radio 4 The Kitchen Cabinet panellist Rachel McCormack started holding calçotadas at an Islington pub, The Drapers Arms, eight years ago. “I thought British people would like them because they’re such a fun event. I also wanted to show there was much more to Spanish food than tapas.” She went onto hold events at Boqueria Tapas in Brixton, where you can try calçots this year on 25 February and 11 March. Morito Exmouth Market also holds the feast every Sunday in February. Barcelona-born chef Victor Garvey has calçots on the menu at his Rambla restaurant in London’s Soho.

Outside London, the Larder House near Bournemouth is holdings its calçotada tonight, offering a five-course feast for £40. And in Wales the Bar 44 group has four restaurants in and near Cardiff where you can try calçots.

Place the ñora peppers in a small bowl and cover with boiling water to soften before bashing to a paste in a pestle and mortar. Set to one side. Drizzle a little olive oil in a frying pan on a medium-low heat, then fry the bread on each side until golden and crisp. Remove from the pan, allow to cool, then finely chop and set aside.

Blanch and peel off the skins of the tomatoes and roughly chop before simmering in a pan to soften for a few moments.

Meanwhile, in a pestle and mortar, pound the garlic clove with a pinch of salt until smooth. Add the nuts, then bash the mixture until it has the texture of coarse sand. Add your tomatoes, ñora peppers and crispy bread and continue to grind the mixture into a smooth paste while slowly adding the olive oil.

Finally, add the vinegar, followed by a little cold water, until you have a thick, coarse sauce. Season to taste with salt and pepper.