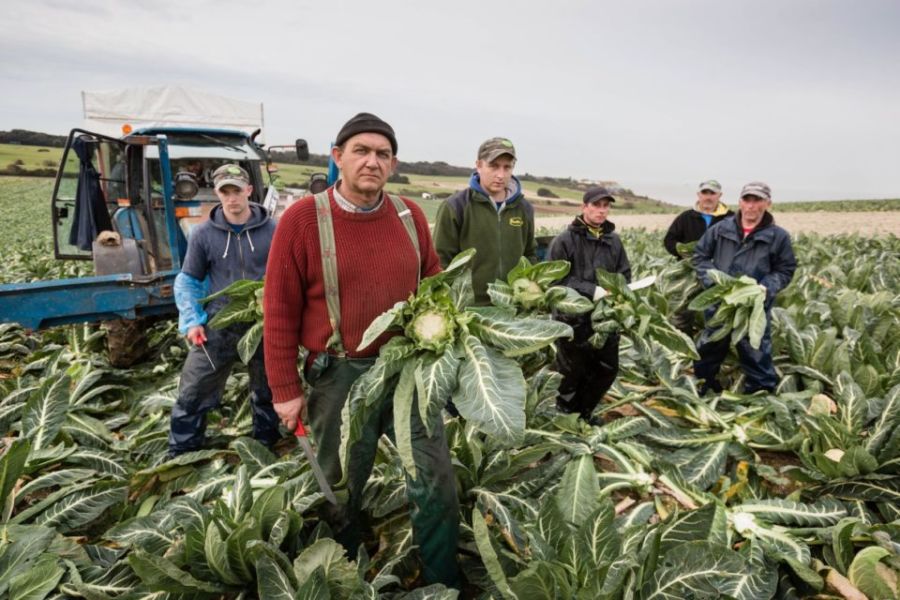 It was an unusual summer on Geoffrey Philpott’s cauliflower farm. The heatwave made it tricky to give his seedlings the best start in life. But after daily watering, by late July the infant brassicas had grown to 12 to 15cm tall and were hardy enough to be planted out in the fields. August brought rain, so come October there’ll be cauliflowers to pick every day until next June.

I joined Philpott and his Kent farm workers at the final stage in their six-week spurt of planting in late July.

Four of the team sit on a tractor stacked front, back and sides with trays of seedlings. They feed the seedlings into a transplanter which deposits them in the earth. Another four workers follow the tractor on foot, checking the plants have hit their targets, and filling in the furrows.

You could be forgiven for thinking this is a lucrative business judging by the prices their crops go for in shops and restaurants.

Beyond the field looms Tesco Extra, selling cauliflowers at £1 a head, £1.65 for an extra large cauli, and £2 for an organic one.

Two miles north west in Margate, one of the country’s most deprived areas despite being increasingly popular with tourists, you can spend £10 on a cauliflower steak with roasted cashews and lemon basil dressing.

At Hawksmoor, the steak restaurant with branches in London and Manchester, spice-roasted cauliflower with IPA raisins, almonds and yoghurt costs £14.

Sales are booming, and increasing numbers of us seem happy to pay high prices in restaurants, when a few years ago we would have snorted at shelling out for a side of cauliflower cheese.

British farmers, however, don’t seem to be benefitting from its popularity. “Those who still grow cauliflower in Thanet are only growing them because they’re passionate about the crop,” says Philpott. “If you looked at it from an accounting point of view, you wouldn’t do it. It’s too risky.”

Philpott plants around three million brassicas over 220 acres. “Twenty years ago there could have been 30 farmers growing veg in this area, now we’re down to half a dozen. They’d probably grow between 5,000 and 8,000 acres of cauli, perhaps even 10,000. We’re down now to less than 1,000, a significant drop.”

The transformation of cauliflower from dull boiled veg into a desirable feature on any table occurred when our hunger for more, interesting, vegan and vegetarian dishes met with a generation of well-travelled chefs willing to listen to customers and experiment with flavours.

Supermarkets began to sell cauliflower rice, an alternative to carbs popularised by food writers such as the Hemsley sisters. Word soon spread that roasting a whole head was the cheapest, most impressive, and most delicious vegan centrepiece.

Dishes such as the £12 cauliflower shawarma from Berber & Q - a smoky whole cauliflowerfrom the grill, dressed with pomegranate and tahini - have become cult orders.

Philpott also plants cauliflowers in his sloping fields above the chalk cliffs of the coastline. Despite their high and exposed position, the spot is bordered on three sides by the sea which keeps the temperature moderate and mostly frost-free.

Only two days’ cutting were lost to snow last year, but the year before was much more difficult as the mild autumn brought many varieties forward. “We had a glut,” Philpott recalls. “My neighbour and I were throwing cauliflower away because we couldn’t sell them, and yet Asda were selling Spanish cauliflowers.” Although he supplies supermarkets, he says they “don’t really support British farmers”, adding: “They don’t want to risk not having stuff on the shelves.”

Philpott, 50, ran the farm with his father until his unexpected death six years ago, and his wife, Lel, runs her riding school there. His nephew Dominic is next in line for the family business.

He says he’s noticed that cauliflower is experiencing a renaissance, but the hefty prices charged in restaurants don’t make sense to growers.

He might spend 3.5p on a seed, and then after tending it and paying for equipment, staff, fertiliser and sprays, the supermarket only wants to pay 20p a head. The open market is also unpredictable. “One minute you’re happily getting 60 to 70p a cauli. The next it’s 10p.”

He laughs at the idea of the £10 cauli steak. “You can go into my farm shop and get a nice large cauliflower for about 60p, and you’ll get about 10 slices out of it.”

“Steak” is an ill-fitting label for a slice of cauliflower, but it’s become the accepted term, and allows retailers and restaurants to charge steak-like prices.

In January, Marks & Spencer was shamed into removing its £2.50 cauliflower steak from the shelves, for crimes against plastic use as much as sense: the slices came in a plastic tray sealed in plastic film, along with a plastic sachet of sauce. At the time the retailer was selling loose cauliflowers for a pound each.

With this sort of demand, Philpott and his neighbours shouldn’t be wasting a single cauli.

Aldi says “the vast majority” of its cauliflowers are grown in the UK, but it’s not clear where all the extra ones are coming from.

Philpott’s harvest also heads to local greengrocers, and his own lovely produce outlet, Rose Farm Shop, which has been going for half a century.

“Rose Farm was Dad’s first farm,” he remembers, “and he used to put cauliflower on a pallet with a little tin honesty box. It was 10p a cauli.”

For the shawarma-spiced butter: Mix ingredients in either a stand mixer or a large bowl until thoroughly incorporated. Set aside until needed.

For the cauliflower: Trim some of the outer leaves, but leave some stragglers - they taste delicious and look great when burnt and crisped.

Set a large saucepan of salted water and bring to the boil. Gently lower the cauliflower into the pan, bring the water back to the boil, then turn the heat down to medium. Remove when tender to a knife, yet retain some resistance - around 7 minutes from when the water comes back to the boil.

Allow the cauliflower to dry on a cooling rack over a roasting tray Brush liberally all over with the spiced butter, retaining some for brushing at a later stage. Season generously with salt and pepper.

To finish: Preheat the oven to 220°C/Gas mark 9, and blast the cauliflower for 5-7 minutes, until blackened all over. Transfer it to finish on the barbecue for a few minutes (if you have one going), basting with any leftover butter.

To serve: Spoon over the tahina sauce and pomegranate molasses. Sprinkle over the remainder of the garnish ingredients, plus a drizzle of olive oil. Serve immediately.