Wow guests this Christmas with a cheeseboard that doubles as a meal - - and looks heavenly. Sophie Morris asks the dairy world’s grand fromages for their tips 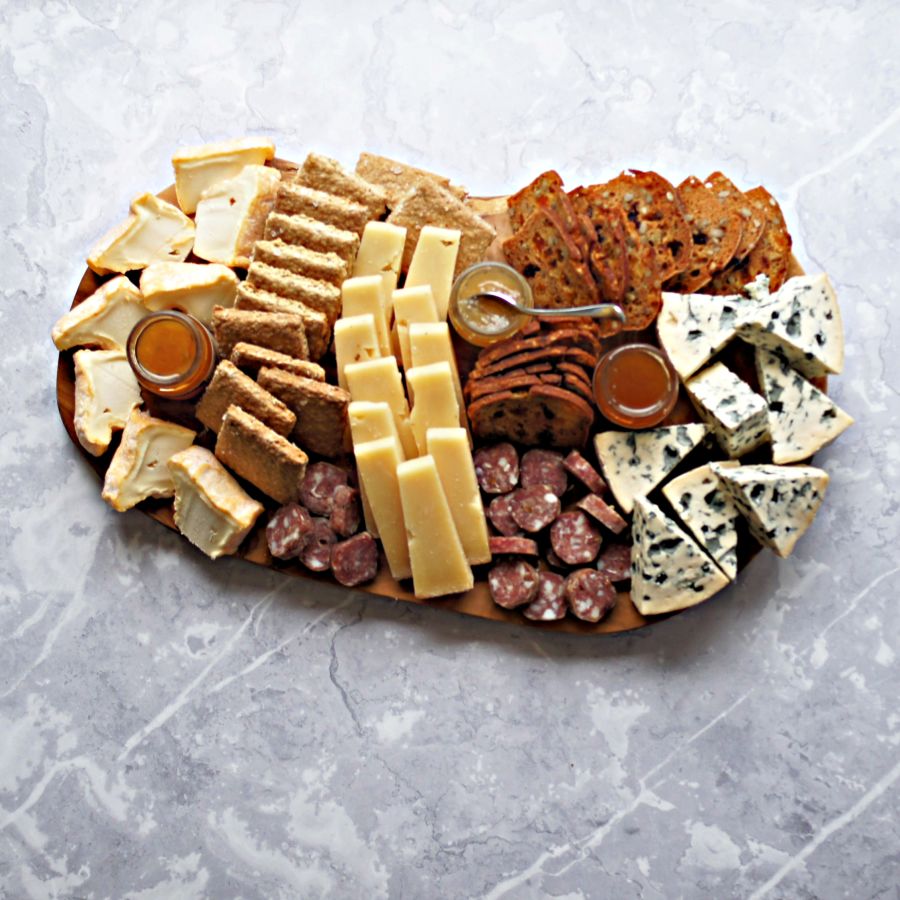 Several new phrases have entered my eating lexicon recently. “Salami river” is one. “Produce ponds” is another. These are both components of an ideal cheeseboard, as recommended by Instagram’s doyenne of curds, whey and rennet, Marissa Mullen, the Brooklyner behind the accounts That Cheese Plate and Cheese by Numbers, each of which has close to 150,000 followers.

With That Cheese Plate, Mullen took putting a cheeseboard together to a new level of artistry, creating edible dioramas in which wedges of soft Brie are flanked by stacks of salty crackers and rounds of mild goat’s cheese flanked by blueberries and blackberries. Harder cheeses are sliced or broken into bite-sized nubbins, and piled up around sweet chutneys or briny pickles, acting as the banks of the fatty, salty, river of charcuterie.

It’s tricky to get behind a new idea for Christmas food that seems time-consuming, but this sort of presentation pays dividends. It will be a talking point, doesn’t require any actual cooking and saves on the washing up created by serving large hunks of cheese with a plate for each guest.

Mullen created Cheese by Numbers to help her followers reproduce her cheese “plates”, as they’re known in the US, and on it you’ll find “a building system for a flawless plate every time”.

“Festive cheeseboards provide that extra element of decadence to a holiday gathering,” Mullen explains. “With delicious cheese, charcuterie, an abundance of pairings and the decorative garnish, the cheeseboard acts as the party greeter and initial conversation starter.”

I turn my attention to the UK, where a similar style of creative cheese presentation has caught on.

It’s sort of like a mindful cheese feast - don’t panic, the fun police aren’t coming for your Camembert - with interesting and top-quality cheeses served in a visually stunning way. This is an antidote to gorging on festive cheese abominations stuffed with cranberries or dried apricots. I’m looking at you, Asda, for the twin crimes of gingerbread Wensleydale and after-dinner-mint Stilton.

Cheesemonger Paxton and Whitfield has devised three cheese kits for £40. Each one comes with three cheeses and accompaniments such as crackers, chutneys and cured meats. There are fig balls, membrillo (quince paste), buttermilk biscuits and dainty pots of fruit confits.

“People put a lot of pressure on all the food at Christmas, but at the end of the day it’s there to be enjoyed,” says Dan Bliss, the shop manager at Paxton and Whitfield’s Jermyn Street store. “Above all we’re saying: ‘Have fun, enjoy your cheese, and don’t worry too much about following every last instruction’.” I choose the “Cheesemongers’ Choice” selection, which Dan says she would go for on New Year’s Eve when the champagne’s out, while the British one would work well at Boxing Day lunch when the table is spread with cold meats. My pack includes Lincolnshire poacher, a raw milk cheese not unlike cheddar but with a texture like an Alpine cheese, which Dan describes as “a bit funky and really fruity”.

Then there’s fourme d’Ambert, a classic blue cheese from the Auvergne which pairs well with dessert wine and the three sweet confits in the pack (quince and apple, pear and vanilla, apricot and orange). The third cheese is Langres from the Champagne region, a creamy cheese with an orange rind which was originally washed in champagne. There’s even an impression in the top designed for fizz to be poured into. “These are favourites within our team and complement each other - the characteristics are all quite funky,” Dan explains. There are also two types of biscuits and a Cornish charcuterie salami.

Dan and her colleagues will sell 6.5 tonnes of Stilton as Christmas approaches, and she employs a junior member of staff just to be a baby Stilton runner, dashing down to the shop’s ancient cellars each time a customer asks for one. When putting together your own cheeseboard, she recommends choosing three or four large pieces . “If you buy 10 little bits of cheese then no one gets seconds and at Christmas that’s a crime.” Bigger pieces of cheese also last longer. When it comes to cutting, the rind protects the cheese so think about quantities before slicing everything up. About 100g per person is fair, but you know your crowd and whether this is the main event or coming after a large meal. “It’s all about fair distribution of rind,” Dan warns. “You want to make sure no one’s missing out.”

She also lets me in on a cheesemakers’ secret, that most of them don’t pair red wine with cheese, because of the tannins. A full-bodied white or champagne is preferable. Customers have started asking for gins to match with cheese, but the only one she has found that works is sloe gin.

I begin my own. Slicing the cheese into regular chunks is pleasingly therapeutic and makes me think about portions. Each slice is around 20g and a satisfying handful. I go off piste a little with the salami, keen to create my own salami river; it’s more of a stream given my thick slices of delicious Cornish salami. Thin slices are more malleable. I also feel I need a produce pond so drop in a small pot of pickles.

I have some beautiful clementines with leaves so on those go, plus some cute little pears. I’m aware I should slice the pears but they look too sweet as they are. Dan has told me she thinks dressing cheese plates is a great idea, but counsels not to include anything inedible. When I see how many berries there are on the holly in the garden I can’t resist and tuck in a sprig of red berries and spiky leaves wherever I can.

From start to finish this has taken 15 minutes and I get more praise for it than I ever have when I’ve spent hours creating pretty snacky food or icing a cake. Welcome to fromage fantasia.

Step 1 Cheese: you want a combination of textures and flavours. I love a good English Cheddar, stinky blue cheese and a light goat cheese.

Step 2 Meat: I created the term “salami river” to highlight the meat down the centre of the plate. To create a salami river, fold a slice in half, and in half again. Repeat until the salami goes from one end of the board to the other, then curve in a “river” shape. You can also create a river of prosciutto.

Step 3 Produce: make your produce “ponds” to pair with the cheese. Vegetables are a nice neutral flavour to pair with robust cheese and meat while fruit acts as a nice sweet accompaniment.

Step 4 Crunch: fill in the gaps on the cheeseboard with mixed nuts and crackers. Always serve an additional cracker plate on the side.

Step 5 Dip: fill in any jars on the board with a dip pairing such as fig jam or compote.

Step 6 Garnish: garnish your plate with fresh thyme, rosemary and sage. Fresh herbs add a pop of colour and have a beautiful aroma.