Restaurateur Russell Norman is marking the 10th anniversary of introducing his adopted city’s cuisine to Britain. By Sophie Morris 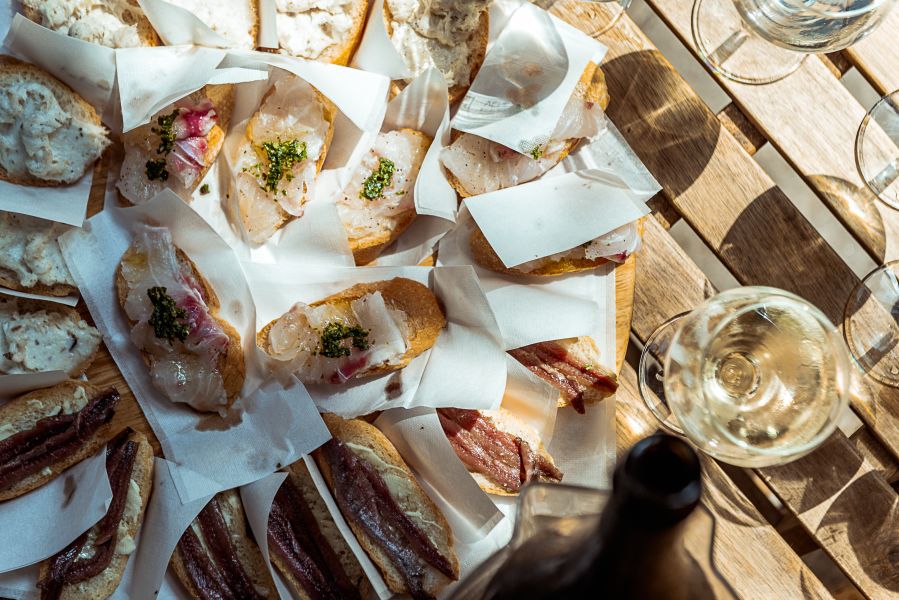 No sooner have I opened my phone camera to snap the Venetian café we’ve stopped at for a shot of espresso than he’s striding off, turning several corners in the warren of sand and ochre-coloured back streets he’s been exploring for more than 30 years.

He disappears into another café, the size of a cupboard, and points out the tramezzini, pretty triangular pocket sandwiches made by piling ingredients high on a square of soft, white bread and folding it on the diagonal, corner to corner.

There are many to choose from - prosciutto topped with layers of tomatoes and rocket, tuna with artichoke, crab mayonnaise. Norman chooses picante, a hot, peppery, porky paste, selected to blast the hangovers out of our ear sockets.

The wake-up call was appreciated as we had spent the previous day touring Norman’s favourite Venetian eating holes and drinking joints to mark the 10th anniversary of Polpo, a chain of five restaurants in London and Brighton that celebrate the cuisine of his adopted city. Ten years of Polpo means it’s 10 years since we started glugging spritzes and enjoying the intimate pleasures of small sharing plates. Ten years since Londoners began queueing down the street for a taste of Norman’s cicchetti, bruschetta, polpette and fritto misto - bar snacks, tasty bits on toast, meatballs and deep-fried seafood. The spritz was a drink almost unheard of in the UK before Polpo began pouring Aperol and Campari.

“I was so keen to have a spritz as the signature drink that for the first three months I would tell Ajax, the barman, to make hundreds,” remembers Norman. “As people came through the door I would hand them one and say: ‘Welcome to Polpo.’ Now they’re everywhere.”

There’s a twist: Venetians make spritzes with still white wine. No Prosecco. Norman is a stickler for detail, as you’ll know if you watched him in the BBC2 series The Restaurant Man, and he was never going to sully his signals to authenticity with fizzing spritzes or champagne flutes.

The spicy tramezzini we eat in Venice, Norman tells me, are his business partner Richard Beatty’s favourite snack. The pair spent a summer in the city 33 years ago, and the experience was transformative for the boy studying at Sunderland Polytechnic. He wanted to enjoy in Britain the dreamy Canaletto light and seductive Campari along with simple snack food made with exemplary produce. Most importantly: no airs, graces or English etiquette.

Venice is a trading city, long home to communities from all over the world. Claudia Roden writes in The Food of Italy that Italians (ie foreigners) see Venetian food as the grand dishes of old noble families, inspired by mosaics, marble and Titian. The Venetians themselves describe their cooking as la fantasia dei poveri (a poor man’s fantasy) which means living, very simply, off the land and the lagoon.

The day before the spicy sandwich, Norman takes us to Cantinone Già Schiavi, a wine shop with a bar in the front part and a glass cabinet displaying shelves packed with cicchetti. This is a bàcaro, home to a style of eating, drinking and socialising that Norman longed to bring home with him. There are slices of bread topped with Gorgonzola and walnut, ricotta and pumpkin, sheep’s cheese and radicchio.

Norman emerges from the dark space with hunks of hard cheese, an olive, pickled onion and anchovy speared on a cocktail stick, and baccalà mantecato, rich fishy smears of salt-cod spread. We eat in the sun by the canal. “It’s the sort of restaurant I wanted to open,” Norman explains. “And I thought: ‘Would Britain be ready for somewhere like this?’ Unfortunately it wasn’t, because we do like to sit down, but this was my model for the original Polpo.”

We move on - there’s a vegetable barge and more bàcari to visit - but Norman stops outside a bathroom supply shop. Shiny porcelain basins and decorative mirrors fill the window. He’s excited and points to three brass taps, all moulded in the shape of a snake. This is the design, he tells us, in the bar at his Soho restaurant.

This attention to detail and clarity of vision marked Norman out as a clear winner in post-recession dining. When he opened in 2009, diners had been sitting at home clutching their purses since the credit crunch, happy to stretch to better at home and loath to pay out for big-ticket dinners.

Norman’s brand of fun, casual, irreverent dining was an instant hit, and branches opened around London and the UK, along with other popular concepts such as the Jewish diner Mishkin’s and all-day New York-ish joint Spuntino. It was announced this year that the business would streamline to survive, and five restaurants remain.

Is it hard to celebrate 10 years in business when the industry is struggling? Spuntino will close at the end of July even though it’s successful because the rent has been raised from £85,000 a year to £200,000.

“The restaurants feel like children,” says Norman, 53, who is married with two children and two dogs. “Closing Polpetto, which we’re trying to do now, closing Notting Hill and selling the pub were all really difficult decisions.”

The real trick to great Venetian food, Norman says, though he doesn’t claim ownership of the idea, is not the cooking but the shopping. All’Arco, the place that provided the greatest inspiration for Polpo, is where the traders from the Rialto Market head to eat after a shift.

You’ll find all the wonders of the edible world on these market stalls, from 10 types of tomato to the first artichokes of the season. There are piles of peaches and cherries, beans and leaves of every colour, veiny treviso and frilly castelfranco. The crab, squid, scallops and razor clams come from Venice’s own lagoon.

We eat anchovies on cold butter and toast, sweet fleshy tomatoes with a whisper of oil and a few oregano leaves. The sea bass comes raw, lightly marinated. Roden points out that the seafood is so good here even a squeeze of lemon seems superfluous. Next week, Norman will fly the All’Arco chefs to London for a restaurant takeover, and from Tuesday to Thursday he’ll host the standing-room-only bácaro he’s always wanted.

He says the biggest compliment he can ever receive is when someone says their time at Polpo was like eating in someone’s home. All over Venice he is welcomed into restaurants like a family member and the best thing about his two cookbooks, Polpo: A Venetian Cookbook (Of Sorts) and Venice: Four Seasons of Home Cooking, is that most of the recipes really are easy to create at home.

The British restaurant scene has been transformed over the past decade, shedding its reputation for stuffy establishments serving three-course meals. Norman inspired much of this movement and a legion of copycats. We can thank him for the exposed brickwork, cracked metro tiles, filament light bulbs and paper menus that have become casual restaurant staples, but we’ve become so relaxed about eating we spend too much time on the sofa scanning Deliveroo. We should protect these places, as Venice guards its fine produce, by eating in them.

Method
First, tear the sourdough into small, rough, bite-size pieces. Put a frying pan on a medium heat and melt the butter. Gently sauté the bread pieces until fully coated, golden and crispy. Set aside.

Next, place the smoked mackerel fillets on a chopping board and, using two forks, pull the flesh in opposite directions to create stringy strands. Set aside.

(On a clean chopping board, cut the tomatoes into bite-sized pieces, discarding any stalky cores, and place them in a very large mixing bowl. Crunch over a few pinches of flaky salt and a twist or two of black pepper.

Add a few glugs of olive oil and about a tablespoon of red wine vinegar. Turn the tomatoes over a few times with your hand. The juice from the tomatoes will combine with the oil and vinegar. Add the mackerel, sourdough and basil and turn over once or twice.

Let stand for 10 minutes, then turn everything over one last time and divide equally into four large bowls, making sure you pour over the residual juices.

Method
Find yourself plenty of space, a large chopping board and sharp or serrated knife. Making sure the tomatoes at room temperature, carefully cut them into pieces the size of small dice. Shape isn’t important, but creating as much surface area as possible is key. I like to discard stalky bits from the crown keep the seeds and juice, of there should be plenty. Transfer the chopped tomatoes a large bowl and scatter a generous amount of salt. Leave to stand for 10 minutes.

Tear any large leaves of oregano in half and add to the tomatoes with a good glug of oil. Stir once or twice. Keep small oregano leaves intact set aside.

Grill the slices of bread until are lightly charred but still a little spring when pressed a finger. (If you have a barbecue on the go, even better. A minutes over hot coals does wonders for the flavour.) Rub garlic clove over one side of slice. Taste the tomatoes add more salt if necessary, spoon generously over the bread.

Scatter over the remaining oregano leaves evenly a twist of black pepper a drizzle of olive oil, then the slices in half and serve pictured above).