Don’t turn your nose up at the sniff test

Morrisons is encouraging customers to use their loaf. By Sophie Morris 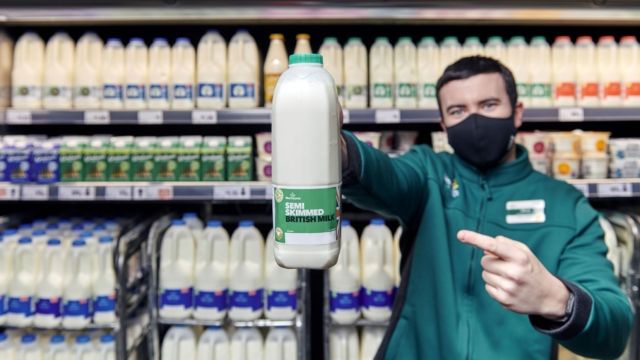 Yesterday, I consumed some double cream with a “use-by” date of 31 December 2021. Twelve hours on, I’m alive to tell the tale. I felt confident using this cream because I gave it a good sniff. A deep inhale, a vigorous stir. It looked, and smelled, as it should.

I knew I was OK to eat the cream, but tasted a tiny bit to make sure. I know plenty of people wouldn’t take the risk, but it’s common sense. Isn’t it? On Monday, Morrisons announced it will remove use-by dates from 90 per cent of its own-brand milk packaging to reduce waste, saying that millions of pints are thrown away every year.

“Generations before us have always used the sniff test - and I believe we can too,” said Ian Goode, senior milk buyer at Morrisons.

The Food Standards Agency (FSA) says the move is legal but the responsibility for risk assessment lies with Morrisons.

The supermarket’s milk will still carry “best-before” dates, which relate to food quality rather than safety. If a product does carry a use-by date, the FSA says it isn’t safe to consume past this time, because “you cannot see, smell or taste the bacteria that cause food poisoning”.

By this logic, milk from any retailer carrying a use-by date would not be safe to try the sniff test on. This is where food safety, common sense and waste issues start to butt heads.

WHAT ELSE CAN YOU SNIFF?
Other dairy products, such as yoghurt, sour cream and crème fraîche, are also ripe for the sniff test. But remember, these items have already been fermented. We enjoy them precisely because they taste tangy. As with milk, if the smell has become unusually strong, or the product has curdled or become mouldy, it is past its best.

“We do encourage consumers to use common sense when it comes to the foods they wish to eat as best before dates are about food quality,” the FSA says. “Consumers can use sensory cues to determine whether the food is appropriate to eat, be that looking for visible mould on bread, tasting to see if biscuits/ crisps are stale, or smelling some dairy products (best before) to see if they have soured.”

I’ve often wondered about the use-by dates on butter, because it lasts months past the warning, even if left out of the fridge. If you have smelled or tasted rancid butter, typically a deeper yellow than the original product and closer in odour to a cow pat, you will remember it.

Oils also last many months before turning rancid, when the smell and taste change dramatically. You can keep oils longer if you store them in opaque containers and shady spots. TOO FUNKY?

There are so many different kinds of meat, all with varying smells, looks and feel indicating freshness. We prize aged beef, which has been hung up in a humidified room, where mould grows on the surface while the flavours develop inside. The longer the beef has been hung, the more it costs. But this isn’t something to try at home. Eating off meat can be deadly.

Many cheeses develop mould. This might be around the whole cheese, as with washed rind cheeses that are typically soft and stinky inside. Think of the white bloom on your gooey Brie, or the bumpy orange craters keeping an Epoisses from bursting its banks. With blue cheese, a safe kind of mould, related to penicillin, is purposefully spread through the cheese. These cheeses can still go off; monitor the smell and appearance. Tasting a small amount should not harm you, but the risk of listeria, one of the most dangerous types of food poisoning, is the reason pregnant women are advised against eating soft cheeses.

If a soft dairy product has mould on the surface, it is possible that harmful bacteria have spread under that furry skin, which could make you sick. A 2014 study found that older people are more likely to eat out-of-date food and therefore more at risk of deadly listeria; 66 per cent said they didn’t like use-by dates.

The same goes for fruit and bread, although I ate some mouldy raspberries this morning because they looked otherwise fine and I couldn’t bear the waste.

I scrape mould off my jam, but this behaviour was the downfall of cult LA restaurant Sqirl. In the summer of 2020, as owner Jessica Koslow prepared to launch her cookbook, various practices at her restaurant and preserve company were revealed, including staff being asked to scrape layers of mould from catering-size jam pots before serving the contents to customers.

ALTERNATIVE FRESHNESS TESTS
Some foods are trickier to analyse. With eggs, some swear by seeing if it floats or sinks in water. The freshest eggs will sink, meaning they are good for poaching or softboiling. So-so eggs will float, long side up, and are best hard-boiled. Eggs that float should be thrown.

Waste haters and common sense campaigners will applaud Morrisons’ bold move this week. I do. But I can’t help thinking the timing is a little, well, off.

Millions of us are struggling, post-Covid, to tell the difference between loo cleaner and leftover chocolate orange. Will you trust your gut on this one?