This weekend, Kitty Tait will open her own bakery - aged just 15 years old. She tells Sophie Morris how fellow bakers helped her rise to the challenge 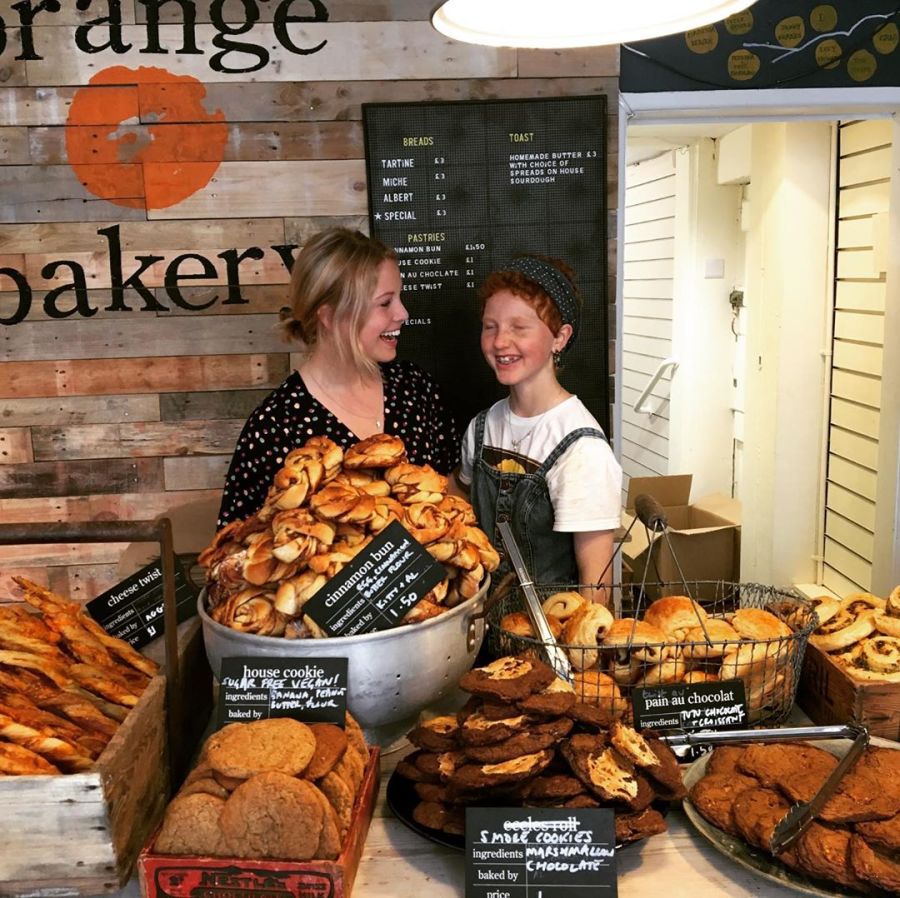 At the beginning of the year, 15-year-old Kitty Tait persuaded her family and friends to help her make hundreds of orange pom-poms. Her plan was to “bomb” her Oxfordshire village with them, scattering the bright woollen balls across bare winter trees. This was Kitty’s guerrilla marketing tactic for her first food pop-up, The Orange Bakery. She opened it only a few months after her dad first persuaded her to have a go at baking.

Dad is 49-year-old Alex Tait, a teacher who works with dyslexic students at the University of Oxford when he’s not home schooling Kitty. He describes his own style of cooking as “enthusiastic but occasionally disastrous” and says the loaves he used to bake himself from time to time looked like breeze blocks.

“When dad made bread I would always quietly opt for the white sliced,” says Kitty, as she prepares to open her own bakery on Saturday. It will be in Watlington, a market town with around 3,000 residents, where she lives. The shop is a response to popular demand: at the January pop-up, queues snaked down the street and supplies sold out in 23 minutes. By April there was a Kickstarter, which raised £10,140 - double the £5,000 being sought.

“This time last year I wasn’t much of a baker,” admits Kitty. “I started baking bread in late summer. I was ill and needed the distraction and at first that’s all it was - a distraction, but it hooked me. The feeling of a live creature under your fingertips; breathing, growing, changing.

“I’ve never really thought of creating bread as baking, more that I was taking part in some extraordinary magic.”

Kitty soon moved on from the white sliced to sourdough. Her bakery will have cinnamon rolls, cookies, croissants and cheese straws, as well as loaves. She’s excited about her focaccia, too, and hopes she’s cracked a new recipe. She is even making her own butters to serve on toast: there will be smoked, wild garlic and sea salt. She bakes every day and gets up at 6am or 7am. At one point she was sleeping in the kitchen to keep an eye on her dough babies.

Her favourite bread-based combinations are currently egg and soldiers with her Marmite bread, which she’s named a comfort loaf; beans on toast with her white tartine; and smoked salmon and poached egg on rye.

For the sweet-toothed she showcases a chocolate-chip bread with fresh raspberries and peanut butter in an Instagram video.

Alex attributes Kitty’s superfast progress to the generous community of bakers she’s met through Instagram. “It’s a nice antidote to everyone talking about how negative social media can be,” he says. Pophams in Islington, London, gave Kitty her most treasured piece of equipment, Margo the Mixer, while Laura Hart of Hart’s in Bristol donated her proving baskets.

“Bakers are a special breed because they make you feel comfortable and treat you as an equal,” says Kitty. “Hamblin in Oxford and the Dusty Knuckle in Dalston have been incredible.

“And Ducky from Handmade Bakery in Huddersfield has been a brilliant person to chat to from the very beginning.”

Kitty’s “God of bread” lives further afield. He’s Chad Robertson of the famous San Francisco bakery Tartine. She hopes to meet him one day. “Tartine was the first book that properly showed me how to make sourdough - it describes his journey while educating you in the beauty of sourdough,” she says.

“Real bread” is so-called to distinguish it from bread made with processed ingredients or added preservatives.

It has four ingredients: flour, water, salt and a raising agent, which in sourdough is a starter or “mother”, a live culture which you feed and grow and share. Kitty is baking with Wessex Mill flour, made with wheat grown locally at a mill 40 minutes away.

She began sharing her bread because she was baking too much for her family of five: as well as her dad there’s mum, Katie, and siblings Albert, 17, and Aggie, 19.

At the time she was also baking in a neighbour’s oven, which was much hotter than their own.

“We got amazing feedback and people started to say they’d pay for it,” explains Alex. “That prompted her to set up a subscription service and she was knocking out 10 or 12 loaves a day, and people would put in an order and she’d go round and deliver it on her bike.”

Friends and neighbours continued to offer help and support, and one day they were approached by a man who had discovered Kitty’s bread at one of the pop-ups.

He told them about a unit he had available in town, and he’s created what Alex describes as a “very flexible” deal so they can try the idea out and see how it goes. The plan is to open from Wednesday to Saturday.

Alex says they have heard there used to be a bakery in Watlington that closed in the 1970s, but it was never his plan to do this sort of thing. “We’re an ordinary family, and tend to do the sorts of thing other people do. We never expected to be home-schooling and opening a bakery.”

If you don’t live in a big town or city or have a fiver to spend on a single loaf, it can be hard to find good bread. Kitty asked £2.50 a loaf at the beginning, which rose to £3, twice the price of a supermarket loaf. But the cost represents what goes into it. However, she doesn’t want to bake food that is out of everyone’s reach. One of the reasons the landlord was so impressed with her pop-ups was the wide range of customers he saw queuing up.

Some of these were the 239 fans who have backed Kitty’s Kickstarter, and she has pledged to paint the names of 196 of these on oranges on a huge mural of an orange tree in the new bakery. If they all turn up on Saturday, let’s hope they form an orderly queue.