From pig cheeks to trotters, we’re going the whole hog

Nose-to-tail eating is having a resurgence as we cut costs. That means learning some new cooking skills. By Sophie 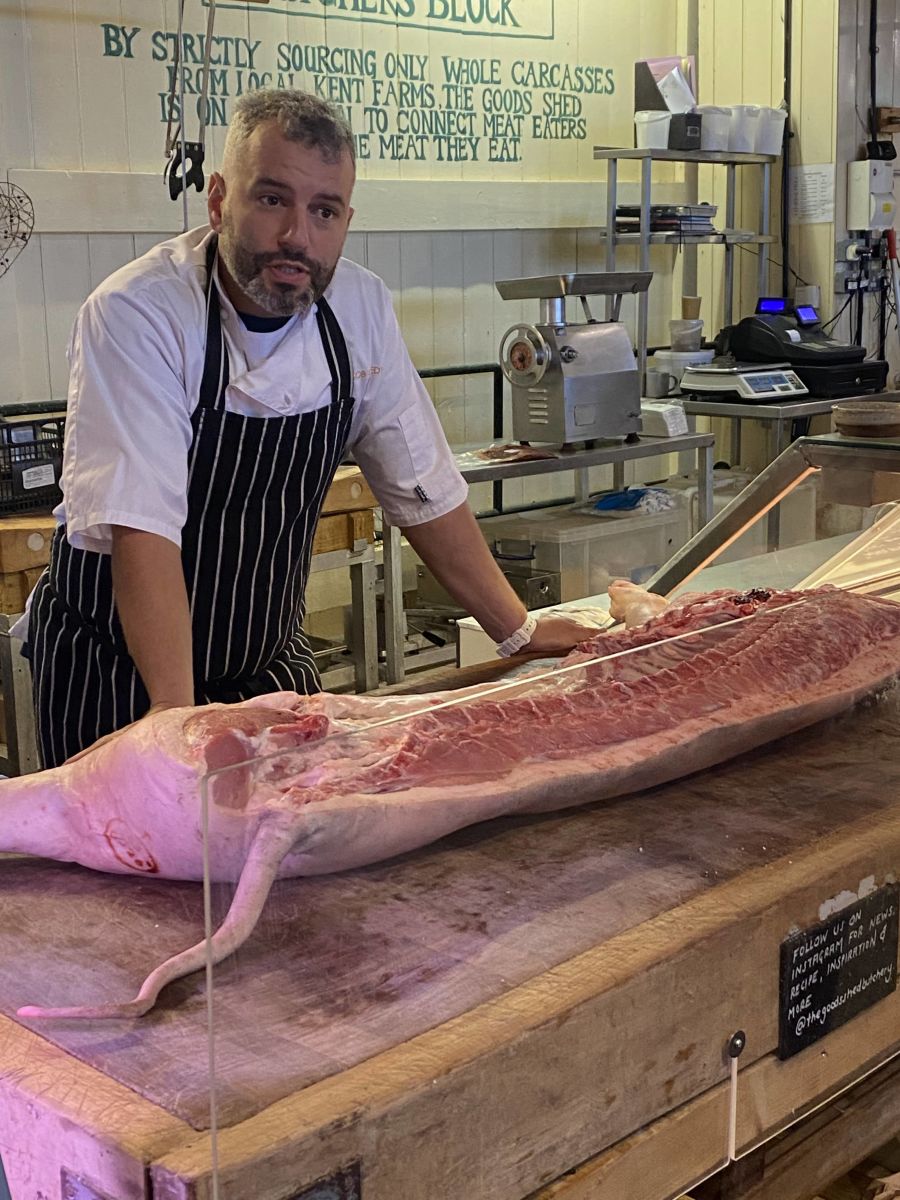 Jacob Kenedy, the owner of Bocca di Lupo in London, uses the whole animal; (inset) the chef hosts a nose-to-tail feast at the Goods Shed in Canterbury

“You need to cook the kidneys quite soon or they start to smell, well, a bit pissy,” says chef Jacob Kenedy, talking offal as he butchers a pig carcass at The Goods Shed in Canterbury, a farm shop and restaurant. Kenedy, chef-owner of the Italian restaurant Bocca di Lupo in central London, is hosting a traditional evening of nose-to-tail feasting based on the Italian custom of maialata, which celebrates the life of a pig.

Across much of southern Europe, families would slaughter a pig as the days grew shorter, to keep them fed through the winter. Some of the meat would be eaten fresh but much of it would be cured into bacon and ham. None would go to waste. For tonight’s event, Goods Shed owner Susanna Sait has bought a local pig, an Oxford Sandy and Black.

Nose-to-tail eating is a sustainable way of eating that asks cooks to consider the whole animal, not just the prized, easy-to-cook cuts. Pigs have trotters, marrow, blood and bones. If we only eat the chops and the fillet, a lot of valuable and tasty parts end up in the bin.

But there are drawbacks.

Squeamishness or a lack of confidence in the kitchen won’t help. Unusual animal parts can take much longer to cook, too, and require knowledge and skill. “The trepidation is still there,” admits Jonathan Woolway, executive chef of St John restaurants and the right-hand man of Fergus Henderson, who is widely credited with turning

Britain on to this style of eating when he opened his first St John in 1994. “We’re light years behind some parts of the world. Tripe, brains, spleens, heads, kidneys and ‘feet’ can be a tricky sell, but when people commit to them they generally enthuse afterwards.”

This month, St John opens its first new restaurant in seven years, in London’s Marylebone. As we all race to reduce spending wherever possible, the idea of nose-to-tail eating is becoming more appealing, and our behaviour is changing at the supermarket or butcher’s as well as in restaurants.

The good news is that there are simple ways to start. It’s easy enough to fry up a piece of liver, for example. I didn’t expect British diners were ready to return to plates of liver and onions, but if the healthy offal sales at Ocado are anything to go by, this iron-rich organ might be the new pork belly.

I am also surprised to learn that the online retailer sells five kinds.

Its meat buying manager Catherine Taylor says lamb’s liver is proving especially popular this season, with sales up 36 per cent month on month. At £4.50/kg, it’s a relatively economical buy.

Though pricey calves’ liver has never fallen out of favour on restaurant menus, and black pudding is enjoying something of a resurgence, offal is not as popular in the UK as in many other countries, and British cooks do not always know how to approach it.

Kenedy explains that all offal must be dealt with while it’s very fresh. He immediately stores the pig’s blood in a bucket for buristo, a Tuscan black pudding, and the liver will be sautéed on the same day too.

His fegatini are a delight. The chunks of liver have a firm texture and a flavour that is strong but not overpowering. They’re served on skewers and cushioned by guanciale, the fatty bacon from the cheek and jowl, which is the cut used in an authentic carbonara.

If you can’t stomach the idea of strong-tasting offal, you can still save money by searching out different cuts. Waitrose reports modest rises in sales of oxtail, which are up 15 per cent compared with last year, and beef shin - up 6 per cent - while the popularity of Ocado’s own-range beef shin has soared by 48 per cent.

“Many of our customers are looking to experiment more in the kitchen and are using lesser known, cheaper cuts of meat in their dishes,” says Waitrose meat buyer Oliver Chadwyck-Healey. “We think this trend will continue as we head into the winter, as they are perfect cuts for casseroles and stews.”

Ian Warren of family butcher Philip Warren in Launceston, Cornwall, sells to many farming customers who have always eaten offal. But he also sells to top London restaurants and says beef offal has become a premium product, with oxtail and beef cheeks both in demand and expensive.

Warren points out that at £10 or more per kilogram, once you’ve taken the bone out oxtail is not cheap. “In general all of these cuts, like shin and oxtail, cost more than they did,” he says. “But we were getting people [shopping for] fillet steaks for a midweek meal, and it shouldn’t be like that. You should be eating the different cuts.”

Kenedy uses the tongue and head of his pig in a pressed meat dish called coppa di testa, while the snout and tail go into cassoeula, a pork and cabbage stew from Lombardy.

Manteca, another nose-to-tail restaurant, in Shoreditch, London, uses the pig’s fat to cook with and the skin in a ragù for pasta, topped with a shard of crispy skin. This type of cooking isn’t just worthy, it’s delicious.

There’s a misconception that we would all eat fillet steak if our budget allowed it, but really our love of lean meats only exploded in the 80s and 90s because of fears over what fatty meats can do to our health and weight.

That may be changing. Take pork belly: 20 years ago it was cheap and unpopular, now it can be twice the price of lean pork fillet. I’m not tipping pig or lamb’s liver to overtake the price of beef just yet, but expect to see - and smell - more of it this winter.