Going against the grain: how salt addicts can cut the habit

The taste is hard to fake, but eating less cuts stroke risk. By Sophie Morris 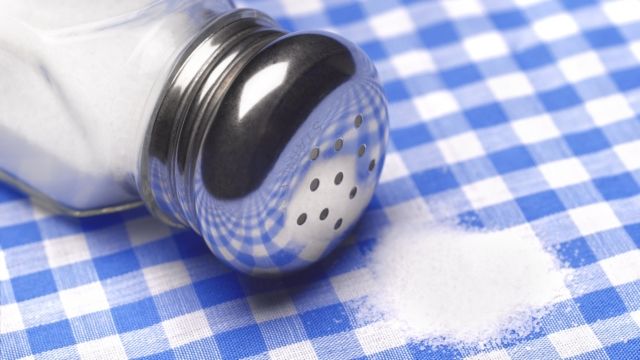 Slowly reduce your intake, and your tastebuds will get used to it (Photo: Peter Dazeley/Getty)

First they came for my breakfast cereal. Then they took my sausages. Now the health Stasi, which has long had designs on my Maldon salt crystals, is reporting new evidence about the benefits of reducing sodium intake, and I’m starting to worry. The results of this survey compound existing evidence that cutting back on salt can reduce stroke and other cardiovascular events.

Professor Bruce Neal from the George Institute for Global Health in Sydney led the study. He made a radical suggestion to The Times. “If you were to replace all of the salt on the supermarket shelves [in the UK] with salt substitutes, you would prevent thousands of strokes and heart attacks every year - that’s quite safe to say.”

It’s also quite safe to say that if we replaced all cars on the road with pedestrians we would save lives - around five a day, according to road safety charity Brake - but we want to drive, just as we want to eat salt. Of course we can cook without it, but it’s a cornerstone of decent cooking and delicious food.

The Government has long advised no more than 6g a day. This isn’t too hard to stick to if you cook your own meals and avoid processed foods, but the minute you eat a packaged sandwich, a slice of salami, a can of soup, a squirt of ketchup or a spray of soy… suddenly you’re hitting the danger zone.

Are some salts better for us than others?
The study looked at people with an existing history of stroke or who are over 60 with high blood pressure. I am not, yet, a member of either group, so will not surrender the eight types in my cupboard at the moment. But it did give me cause to wonder if some salts are better for us than others. I use standard table salt in cooking, as most chefs say using a fancier one makes no difference. Maldon or fleur de sel crystals are for finishing.

At some point in the past decade, pink Himalayan salt became popular. Its pretty crystals were said to be lower in salt than the white stuff and contain all sorts of trace minerals which makes it both taste different to regular salt and bring other health benefits. But these traces have been shown to be so miniscule they will do nothing for us, and it isn’t really lower in sodium either. But we’re still enamoured with the expensive rose and peach coloured rocks, and blocks of it are used as serving platters or to make lamps, their presence considered calming. Smoke it As the salt sommelier I once encountered in a three Michelinstarred restaurant would attest, there are a perhaps unknowable number of salts. But all are made of the same thing, sodium.

I use local sea salt made by my friend Lisa when I want to bring out the taste of local fish or seafood. Black kala namak salt is slightly pungent from its sulphur content and gives vegan scrambled eggs a kick of the real thing. My secret weapon during camping trips and visiting friends and family is a compact trio of smoked salts from the Welsh Homestead Smokery - cumin, chilli and black pepper. Smoked salt, like salted caramel, is an alchemic experience chased by palates the world over.

Can we cook without it?
“If you don’t salt your food, you’re missing out on so much,” says Alison Lea-Wilson, a founder of the Halen Môn salt company and the author of a book on sea salt. “Salt makes food taste like more of itself. Take cookies, for example, a pinch of salt makes the cocoa taste more chocolatey and the butter more buttery.”

It’s not surprising that a salt supplier is a fan, but we do actually need some in our diets to survive. As Mark Kurlanksy suggests in his brilliant account of the resource, Salt: A World History, “The history of the Americas is one of constant warfare over salt.” But for those who need to, can we do without it? We know the deadly but delicious triumvirate of fat, salt and sugar needs reducing, or balancing with other, fresh foods. But it is far easier to find fats and sugars that are either better for you or decent substitutes than it is salt. Why? Because that delicious salty taste comes from the sodium itself.

New food regulations are like catnip to manufacturers. They may bemoan restrictions, but in reality new rules give them fresh reasons to create new “lo” or “free-from” products and market them to us. But they are struggling with the salt conundrum. Alter the recipe too much and you’ll lose customers. The shelf-life of a product may also be reduced. One approach is trying to “hack” salt itself, altering its properties to make us think we’re getting more than we are. It has been found that making the crystals smaller gives consumers a bigger salt hit with the first bite, which is satisfying even if the product contains less salt overall. Alternatives You can’t fake salt. But there are ways to fake the experience of eating it, largely through smell. Artificial sweeteners often use vanilla to trick our brains into thinking we’re eating something sweet. With salt, umami - savouriness - is key. We associate foods such as meat, sardines and anchovies with salt, even though they contain none naturally, so we can trick the brain into thinking it is getting salt if we eat things where there is an expectation of it.

Gradual reduction can work, too. It is not unlike any other sort of gradual diet, I’m afraid. Slowly reduce your intake, and your tastebuds will get used to it. But I’m going to advocate the cooking route. Using salt as a seasoning is meant to enhance the flavour of your food, not numb it into surrender. As with our fry-ups, vino and Hobnobs, moderate before you’re forced to go cold turkey.