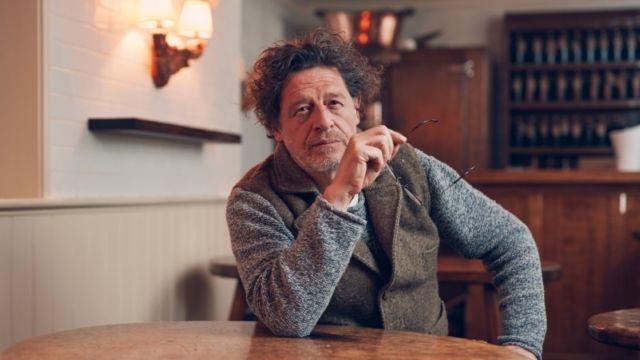 Marco Pierre White: “Dishes which I may once have foolishly considered just the garnish on a plate have now become wholesome, spectacular and delicious centrepieces”

Marco Pierre White doesn’t seem the obvious choice to front a vegetarian cooking course. He owns a chain of steakhouses and famously posed with a meat cleaver on the cover of his cookbook White Heat, back in the era when he made Gordon Ramsay cry - back when vegetarianism was a suspicious subculture.

But White’s presenting style, after years of fronting Hell’s Kitchen and other cooking shows around the world, appears tempered to the genteel for his new online course for BBC Maestro, with 24 video lessons bringing haute cooking skills to vegetarian food over five hours.

There are no instant noodles here, or cultish ingredients - though it does ask for a bit of kitchen kit, such as sous vide machines (you can improvise, however) and deep fryers.

Chatting to i a few days after his 60th birthday, White reveals how he once gave veganism a go. Inspired by his daughter and her friends, who rarely eat animal products, he tried it out a decade ago.

“It was an amazing nine months,” he remembers - one that was “more about the journey” than the food alone. “The first three weeks, it didn’t affect me in the slightest. Then in the six weeks after that I became quite introverted, quite weak. Then I went back to normal, slept a lot better, my sense of smell was greater and I lost an enormous amount of weight, about four or five stone, and had a lot more energy.”

January is certainly a time for journeys (albeit metaphorical ones rather than real travel for most of us at the moment). But White’s course is far from the denial or abstention embedded into the start of a new year, with its suggestions of resolutions and health kicks, giving up and cutting down. His dishes are traditional, generous and honest.

I was expecting something a bit more nouveau - complicated techniques which perform miracles with flavour but require weeks of training. Instead there is mushroom risotto, truffled cauliflower cheese and arancini. Endive tarte tatin, stuffed cabbage, braised celery with walnuts and Madeira and five types of potato.

Yes, there are cheffy techniques; the aforementioned sous vide is my least favourite method of cooking because of the vile pap it transforms meat into, but I’m willing to give it another go for White’s celeriac with cheese and truffle.

“Dishes which I may once have foolishly considered just the garnish on a plate have now become wholesome, spectacular and delicious centrepieces,” he explains in the course.

“In the world of gastronomy, chefs love to ‘deconstruct’: to break down the components of the dish to make little knickknacks of this and that. In truth, I don’t like this; deconstruction makes no sense. The ingredients - Mother Nature’s creations - become unrecognisable.”

“Top names turning away from animal products have made headlines in recent months. Claridges said goodbye to chef Daniel Humm (inset) at the end of 2021 because he wanted to take the Mayfair hotel’s Davies and Brook restaurant vegan. His New York restaurant, Eleven Madison Park, stopped servingfish or meat last summer, but still uses some animal products. Alexis Gauthier, another Michelin chef in London, turned his restaurant Gauthier Soho fully vegan last year, but only after years of offering a fully plant-based menu alongside meat and fish menus.

“It’s a business,” White says of Claridges. “It would be nuts to go purely vegan.” He points out that Alain Passard, who has three Michelin stars at L’Arpège in Paris, took animal products off his menu 20 years ago but has since reintroduced them.

Why all this talk of stars? White was the first British chef, and the youngest at the time, to be awarded three Michelin stars at 32 in 1994. He is a classically trained chef who learnt from great names including Albert and Michel Roux and Pierre Koffman. A true legend, or maestro, as the BBC would have it.

Tired of the pressure and pretence of cooking at this level, he retired from cooking in his own kitchen at the end of the 20th century, hence the steakhouses and other high-end but casual restaurants bearing his name, around 40 in total.

What does he think of Michelin today? “They make really good tyres,” he deadpans. “You’re judged by people who have less knowledge than yourself. Sometimes I go to Michelin restaurants and I don’t understand what I’m eating.

“You can respect the technical ability, and they’re very successful at turning a canapé party into a dinner party. But I don’t want 12 or 15 portions of little knick-knacks which tend to be tepid. I want hot food.”

“Nonetheless, White is no stranger to culinary evolution. Later this year he will put 3D-printed vegan “steaks” onto his menus, selling the plant-based foods from Israeli company Redfine Meat for similar prices to the real cuts of beef. “It’s the cleverest product I’ve seen in my entire career,” he says, much more energised than when discussing tasting menus. “When I first tried it, I snapped it in half to look at the structure, and it’s got the texture of a cheek of beef or brisket. I could make a boeuf bourguignon and you wouldn’t know it wasn’t meat. “One of the only downsides for me personally as a vegan was I never felt fulfilled. An hour later I was hungry again.”

But most of his time, he tells me, is spent far from lab-grown meat or the heat of a kitchen. He likes to garden and walk with his lurchers, enjoying his country-house hotel and estate The Rudloe Arms in Wiltshire, not far from Bath. He has applied for nature reserve status, and watching wildlife return to his land is something he is as proud of as any plate of food.

“The kingfisher’s just arrived for her breakfast,” he says. “I first saw one in September, by myself when I walked to the pond to feed the carp. Everything we do here is for nature. When you create something and see nature come, it’s just the best.”

This sauce can be made well in advance and stored in batches in the fridge or freezer.

Heat the oil in a large saucepan over a medium heat, add the grated onions and garlic, and cook until softened. Add the thyme and bay leaf, and continue to stir. Add the cherry tomatoes, and cook until they begin to break down. Add a little more olive oil if necessary. Let the tomatoes slowly release their liquid, and then increase the temperature.

Taste, taste, taste. Notice how the acidity of the tomatoes evaporates as their natural sweetness takes over. When you’re happy with the sweetness of the sauce, add the tinned tomatoes, stir well, and bring to a gentle boil. Cover with a cartouche of baking parchment. Then wrap the saucepan lid in tinfoil and place the wrapped lid on top of the pan. This way, what happens in the pan, stays in the pan. Cook in the preheated oven for one hour.

Pass the sauce a bit at a time through a conical strainer. Use the back of a ladle to thoroughly push through the liquid until what is left in the colander is almost dry, and, as you go, discard the husks. Taste the sauce and adjust seasoning if necessary.

Heat 2 tbsp of olive oil in a large flameproof casserole pan over a medium heat. Add the sliced carrots, onions, garlic, bay leaf and thyme, and sweat them down, stirring occasionally to prevent the pan scorching. Notice how the sizzle becomes quieter as the vegetables’ water content evaporates.

Add the artichoke hearts to the pan, and pour in the wine and let it reduce to remove the wine’s acidity and bring out its natural sweetness. When you can no longer smell the acidity of the wine, it’s time to pour in the vegetable stock and add a couple of pinches of salt. Let the stock come back to the boil and then reduce the heat to a simmer and cover with a cartouche made from baking parchment. Continue to simmer for about 20 minutes. Check the artichokes by inserting the tip of a knife - there should be no resistance.

Meanwhile, in a small saucepan, heat the tomato sauce (or passata, if using) and add a splash of olive oil. Whisk in the softened butter.

Make basil butter in a food processor by blending the basil leaves with 1 tbsp of olive oil and your butter. Add this to the pan of artichokes and swirl the pan so that the butter melts and emulsifies.