They are a street food staple enjoyed around the world, but you may be surprised to discover just how versatile samosas can be (think fillings of jerk chicken, spicy beans - and even chocolate). By Sophie Morris

“I’m not sure whether I should say this,” says Joti Sohi, “but I believe there are very few Indian families who still make their own samosas. Don’t get me wrong, there are some who do, but it’s a real labour of love. Making the pastry is time-consuming and getting it to the right consistency and texture is tricky.

“But it’s interesting because whether you’re an Indian born in India or in the UK, the samosa has always been the same. It’s always served as an appetiser when someone comes to your house around six, and it’s always with cumin and cubed potatoes and peas and chillies.”

ANY FLAVOUR YOU FANCY
Sohi, who is Canadian but lives in London, wants to open our eyes to the potential of samosas. She has brought her friend, the well-known chef Rick Matharu, from Canada to the UK with the pair’s Secret Samosa Club which - and purists should look away now - is serving samosas in flavours that mash up American junk food, Caribbean spicing and the Mexican burrito. Should someone alert the cultural appropriation police? In fact, Matharu describes his food as “an ode to the immigrant experience” and developed his offbeat flavours by combining comfort foods from different cultures.

“People are never reluctant to try our gourmet samosas,” says Sohi. “But they might be surprised. We’re doing things in an unconventional way, with jerk chicken, Punjabi cheeseburger and cheese and bean burrito samosas. We achieve the cheeseburger flavour with the minced beef, oozy cheesy goodness and then the crunch with the red onion.”

Chetna Makan is also keen on experimentation. “In today’s world, when people are travelling so much and moving to all parts of the world, it is good to see people trying to experiment and combine different cuisines together,” says the Great British Bake Off semi-finalist and author of three cookbooks on Indian food, most recently Chetna’s Healthy Indian (£20, Octopus Books).

“Samosas have a lot of variations and I’ve heard of people filling them with all sorts of ingredients like chocolate and even pasta - neither of these are traditional but could work,” says chef Surender Mohan, the culinary director of the restaurants Jamavar and Bombay Bustle in London’s Mayfair. “Although sushi is something that should never be put in a samosa!” A GLOBAL SNACK We think of the samosa as a quintessentially Indian snack. It’s a triangular savoury pastry fried in ghee or oil and packed with spiced potatoes, vegetables or meat. Head to any Indian neighbourhood, such as Southall in west London, and you’ll see mountains of the golden pockets in the windows of food shops. But, in fact, the snacks originate from the Middle East and Central Asia and so tell a story of the people who came to India and what they left behind.

“The term samosa and its variants cover a family of pastries and dumplings popular from north-eastern Africa to western China,” explains Mohan. “There are many countries who serve and eat them, including India, Pakistan, Nepal and Bangladesh, and within each region they can vary.”

Our samosa minced oozy.” The size can vary greatly, too. Sometimes you’ll find huge samosas, a meal in themselves and almost big enough to rival our Cornish pasties. But often they are small and dainty, designed for devouring in two or three bites

FROM STREET FOOD TO THE CHEF’S TABLE
Makan investigated samosas while researching her street food book, Chai, Chaat and Chutney. She says while they are traditionally a street food in India, they are also very popular in cafés and restaurants, while some people are making them at home and baking them to make them healthier.

The filling depends on the region and the cook. Makan and Mohan both favour the classic Punjabi potato and pea filling. There’s a venison samosa served with cauliflower on the Jamavar menu currently, and Mohan also likes spinach and cheese corn samosas, and mutton kheema samosas, which are known as patti samosas.

Asma Khan has chicken samosas on the menu in her Darjeeling Express restaurant in Soho at the moment.

WHAT TO MAKE AT HOME
When Sohi is cooking professionally, she says that with someone helping her she can get her head down for 12 to 15 hours and make about 500 samosas. Don’t let this put you off, as Makan and Mohan agree that samosas are easy to make at home. Makan’s recipe uses filo pastry deep-fried in sunflower oil with a sweet and spicy onion filling, and she also makes a sweet samosa with nuts and dried fruits.

cheeseburger full of beef and cheesy “Samosas are an everyday snack and after some practice, they’re relatively easy to make,” says Mohan. “But it’s important to make sure the coating of the samosa is perfect otherwise the oil will seep into the filling, making it too oily and spoiling the taste.”

Sohi points out that lots of cultures have their own versions of the portable pastry pocket, such as empanadas in Latin countries and our own pasties, so innovating with multicultural samosas makes perfect sense.

Heat the oil in a pan, add the onions and cook for five minutes or until they begin to soften. Add the salt, chilli powder and fresh green chilli, mix well and set aside to cool.

Take one sheet of pastry and cut it in half. While you work with each piece, keep the others covered with a damp tea towel.

Place a heaped tablespoon of the onion mixture at one end of the strip of pastry. Fold over one corner of the pastry to form a triangle, then continue folding in alternate directions along the strip to make a triangular parcel. Seal the end flap with a little melted butter, then put the filled samosa under a damp tea towel so it doesn’t dry out.

Repeat with the second half of your first pastry sheet and then continue until all the pastry and filling have been used.

Two-thirds fill a deep-fryer or tall, heavy pan with sunflower oil and heat it to 190°C. Once the oil is hot, fry the samosas a few at a time until golden brown. Watch carefully as the filo pastry browns quickly.

Drain on kitchen paper before serving the samosas hot with chilli chutney or coriander chutney.& 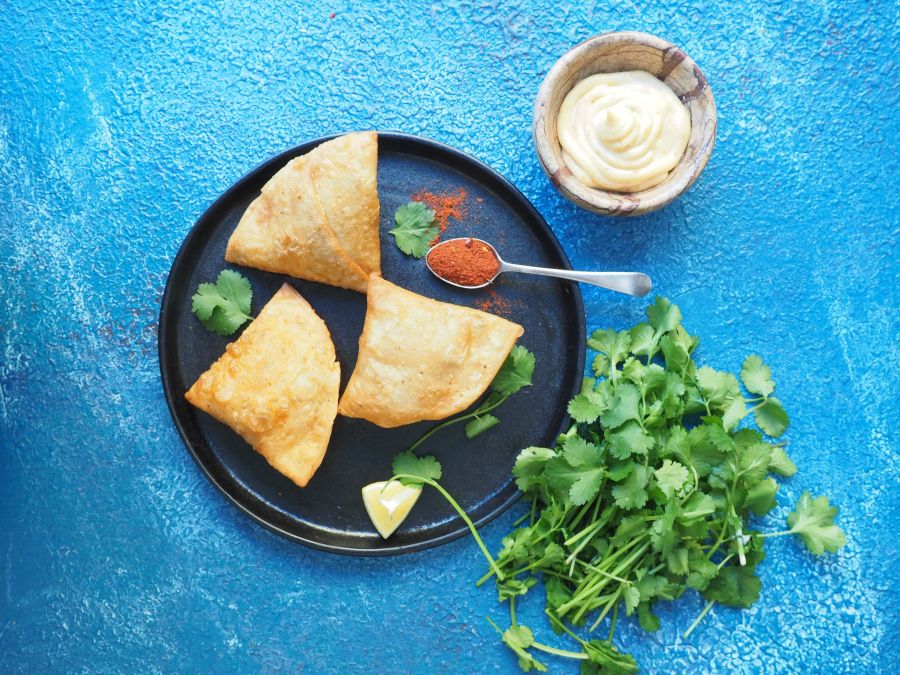 Samosas from The Secret Samosa Club