Grease is the word

It’s cheaper than butter and makes fluffier cakes - but not everyone likes the idea of baking with margarine. Sophie Morris finds out which cooks do, and why different fats offer different benefits 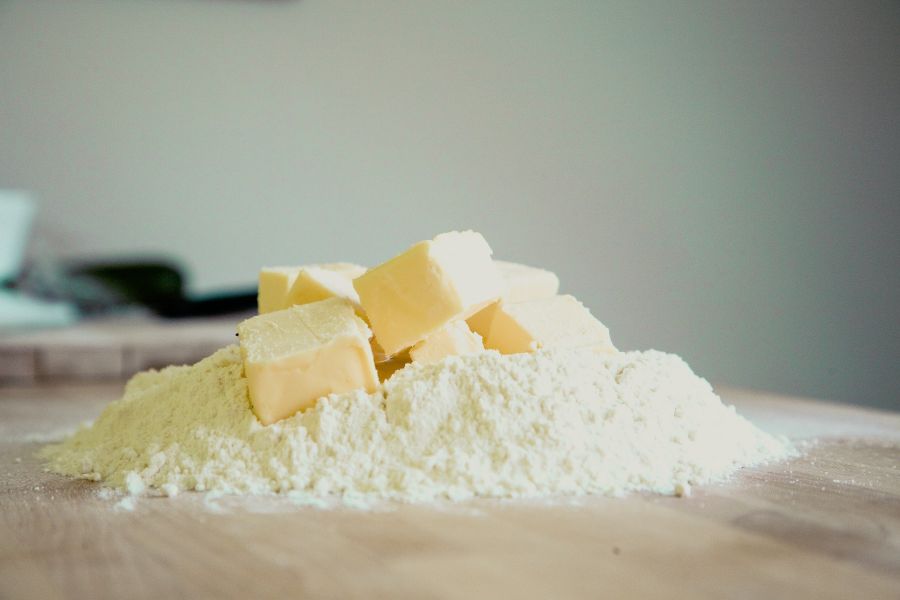 Image by Markus Spiske from Pixabay

Have you rubbed butter into flour this weekend, or beaten eggs into soft margarine? Even if you’re not a baker yourself, you’ve probably seen, heard or tasted some evidence of our rush to sweet and savoury baked treats over the past eight weeks. Social media channels are alive with professionals hosting bake-a-longs and the proud parents of debut sourdough loaves. Or are you thinking longingly of a DIY Victoria sponge? Even now, in some locations across the UK, there are still shortages of flour and yeast.

Baking ingredients began to fly off the shelves in that other universe we inhabited in early March. At the same time, the baking spread Stork was publishing a cookbook to celebrate its 100th anniversary, The Art of Home Baking: 100 Years of Memories (Ebury, £20). The book, useful as it is, can’t take credit for the empty shelves.

But figures just released from market research agencies Kantar and Nielsen both show how big the brand’s sales hikes were this spring, evidence of how keenly we’re baking the pain away. Nielsen has recorded a 26 per cent increase year-on-year and Kantar 16 per cent, in the four weeks to the weekend of 21/22 March.

“With recent surges in homebaking during these unprecedented and uncertain times, the Stork family is honoured to be there for our country’s home bakers today, just as we have always been for the last 100 years,” says its UK marketing director, Catherine Lloyd.

Making with margarine If you’re not familiar with Stork, it’s a vegetable oil-based margarine. The baking block is vegan, though there is milk in the baking spread. Margarines are often favoured for bringing a light and fluffy quality to cakes, and are usually around half the price of butter.

War-time celebrity chef Marguerite Patten was a fan of Stork. As, apparently, is the Queen (according to Stork, that is). Mary Berry is one of a number of professional bakers who have never been snobbish about only using butter in bakes. This latest Stork book is introduced by a younger baker, Ruby Bhogal, who was a finalist in the 2018 series of The Great British Bake Off.

She points out that baking has changed her life dramatically. We might not all be destined for a Bake Off final, but it is possible that gifting ourselves a few moments of reflection as we sift flour, and some much-needed indulgence by way of a second slice of lemon drizzle, can help us adapt to the present time, and the months ahead. “Ask anyone about baking and I guarantee you it stems back to happiness,” writes Ruby. “Happiness for you, your soul, those around you and, of course, everyone’s tummy.”

Pastry chef Rav Gill, who recently published The Pastry Chef’s Guide (Pavilion, £12.99) has been hosting baking videos on her Instagram account. She grew up using Stork and thinks it’s a great alternative to butter. She also confides that spread is a secret weapon in many professional kitchens. She trained at Le Cordon Bleu and has worked in many upmarket restaurants, including Fergus Henderson’s St John (she’s not suggesting any Stork was used here). “It’s so pliable and easy to work with,” she says, “and the final product is a super moist cake. I know a lot of people who make wedding cakes and big cake orders who use Stork over butter. I don’t think there’s any shade in that as the markups in cake are so tight.”

Butter Julie Jones, author of The Pastry School (Kyle Books, £25), is known for her intricate decorative pies, loved by her 145,000 Instagram followers. She’s a butter purist. “I’ve always loved butter. It’s definitely the best and it’s so comforting,” she muses.

She’s lucky enough to have a lockdown stash as a café owner near her Carlisle home thought of her when she was closing up and the precious fat wasn’t wasted.

“Everything tastes better with butter,” she says. “You don’t get the same rich flavour with anything else. Pastry can be a great pastime for people and there’s nothing more comforting than a pie.”

Rav uses unsalted 82 per cent fat French butter, and says it’s easy to taste the difference between a good and a bad quality butter, especially in something like puff pastry. When it comes to cakes, she points out, choosing a fat should determine the method. If your main fat is butter, you probably want to cream the butter with the sugar and sprinkles, and vegetable oil was a worthy stand in. “A lot of kitchens have standard large cake recipes with oil because it’s cheaper,” admits Rav. “I worked in a massive kitchen which didn’t use any butter even in choux pastry, as butter has become so expensive.

“I was sceptical about it, but oil in a choux makes it come out really crispy.” Coconut oil is popular in vegan bakes but remember it will bring a strong flavour with it. Rav favours it for bringing a sheen to chocolate, so she can avoid tempering, and in a vegan ice-cream base.

The rest Julie uses lard in her hot water pastry, the type of pastry typically used in cold meat pies. She laments the loss of butter flavour but the pig fat makes the pastry much crispier.

Rav often used lard and suet, which is fat from beef or mutton, when she worked at St John. The suet went in spotted dick and bread puddings, giving a really fatty and luxurious flavour, though the restaurant and bakery switched from lard to butter in its famous Eccles cakes to make them vegetarian.

The best thing about lockdown baking? Many of us have more time, and we’re being forced to experiment. We’re told baking is all about science, but it’s also about mood, courage and innovation.

And acceptance: if it comes down to using oil instead of butter, or losing an egg, to get your home-baked goods on the table, I suspect you’re ready for the sacrifice.

first, and make sure you bring it up to room temperature and soften first.

Oil could be your perfect isolation bake if you’re alone and don’t want to eat a whole cake each day, because it prevents the sponge drying out. If you’re using oil as your baking fat, Rav says, it’s usually better to whip the eggs and sugar together and then add the oil.

At her recent pop-up, Puff the Bakery, which is currently doing an online baking course, a blood orange loaf cake made with olive oil was the most popular bake. She used a very good quality Spanish oil from Brindisa and found it lasted for five days. Cheaper oils bring benefits, too. Last week, I couldn’t bring myself to spare precious butter for a kids’ sponge that was all about the icing