British diners have embraced the classic Italian sauce as the ultimate convenience food. But if you’re only eating it on pasta, you’re missing out, says Sophie Morris 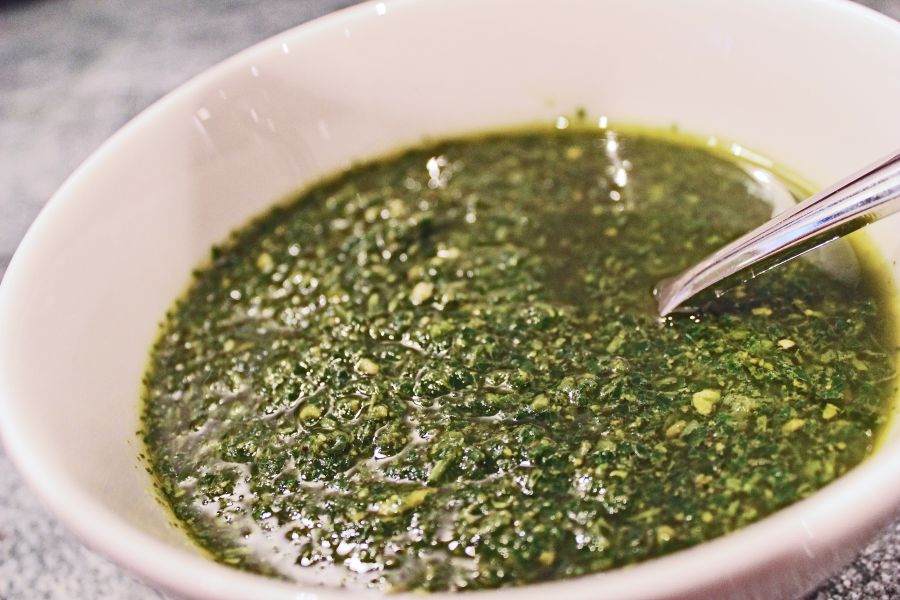 I’m pretty sure the pesto police would have kept their sauce to themselves had they known the ordinariness to which it would plateau in the UK. When Elizabeth David was writing about it in the 1950s pesto was available in specialist shops, but it wasn’t until supermarkets began selling it in the 1990s that we hoi polloi got a taste for it.

At this point, the emerald paste - authentic pesto alla Genovese is made from basil, olive oil, garlic, pine nuts, Parmesan and pecorino cheeses - was a chic thing to have on any restaurant menu. Simon Hopkinson was serving it with baked aubergine at Bibendum; Nigel Slater was smearing it on toast. Today, it is the ultimate sloven’s supper; the go-to dressing for British children’s pasta.

But as winter snaps, the bright green colour of pesto and its bold, fragrant flavour can also lift many meals out of the winter doldrums. You can smear it on fish and meat, use it to wake up your morning eggs or dress roasted root vegetables. Try adding a slick to a hearty winter soup: soupe au pistou is a French bean and vegetable soup finished with pistou, Provençal pesto made to a similar recipe but without nuts.

“Pesto is one of those things that everyone loves,” says James Elliot, one of the founders of pizza chain Pizza Pilgrims. “We’ve launched a new menu at the site in the City, and we’ve put a pesto pizza on there, with these amazing datterini tomatoes, and we plonk a big burrata [a sort of mozzarella cheese bomb] in the middle.”

The Italian brand Sacla was the first to supply the big retailers; it remains the country’s best-selling brand, but Sainsbury’s launched its own label version shortly afterwards, then everyone else piled in. Sacla’s new book La Famiglia: the Family Book of Pesto (Penguin, £7.99) shows how to use pesto in a variety of dishes, from fish pie to lamb ragu and sweet potato burgers, in an omelette, all-day breakfast and even with baked beans.

The chef Rachel Allen recommends using its popularity with children to introduce them to other foods: “Pesto is a magic wand in the kitchen, transforming anything and everything it touches - from pasta, pizza and soups to sandwiches.” Real pesto bears little resemblance to a cheap sauce from a jar though. Despite Genoa’s claim on the fragrant paste, and agreement that basil is the original and authentic version, any recipe made with herbs, nuts, cheese and oil can be called a pesto, as the name derives from pestare, which means to crush or to pound. Purists say this is the only way to make a good pesto - no relying on your food processor.

Consumers were unhappy when it was revealed earlier this year that some major producers, including Sacla, were substituting key ingredients - pine nuts, basil, olive oil and Parmigiano-Reggiano (Parmesan) - for cheaper options such as cashews, sunflower oil and grana padano or pecorino cheeses. Other suspicious interlopers included potato flakes and carrot and bamboo fibres. Following the survey by the consumer watchdog Which?, producers defended their recipes, pointing out that their jars clearly list the ingredients. Sacla’s No 1 Classic Basil Pesto and No 5 Organic Vegetarian Basil Pesto have also been criticised for containing more salt than a McDonald’s hamburger.

You could trade up. The jump from a pound or two for a supermarket jar to between £3 and £5 for a small pot of handmade pesto in a delicatessen may seem a bit of a leap for an everyday item, but the handcrafted stuff is dreamy. Making your own is cheaper, especially if you have a glut of basil. Sadly, truly authentic pesto is out of reach for most of us, as it’s made only with basil from Liguria, explains Marina Dentamaro, who has managed Soho’s Lina Stores, an Italian delicatessen, for 10 years.

“The pesto we sell is the one we’ve been making for 50 or 60 years. Using the right basil is key. You can tell when the basil is not Italian, or not from the Mediterranean. Ours is 100 per cent basil (others may mix it with spinach or with rocket, to make it cheaper) with Italian pine nuts and a mix of pecorino and Parmigiano-Reggiano and a very good extra virgin olive oil from Liguria.”

As well as selling pesto in 200g pots, the delicatessen also uses it on its home-made sandwiches, and Dentamaro says it works well with bresaola (salted beef) and certain cheeses.

There’s a lot of talk about cultural appropriation in the food world at the moment. Sometimes, such as when dishes are taken and messed around with in a way that undermines their heritage, or when their origins are not fairly credited, it should be called out.

Authenticity is a specific cross to die on, but show me something more delicious than crushed basil embalmed in a grassy oil and studded with cheese, garlic and pine nuts on a grey day. If you don’t have a delicatessen nearby or a freezer stocked with frozen herbs, try out some winter versions with kale or cavolo nero. And eat all the evidence before the pesto police catch you.

Slice each chicken breast in half horizontally to make 8 thin fillets.

In a small bowl mix together the breadcrumbs, Parmesan, pine nuts and parsley. Season with salt and pepper.

Spread the pesto all over the chicken breasts, then cover generously with the cheesy crumb mixture.

Drizzle with the remaining oil and cook in the oven for 15-20 minutes, until the crumbs are golden and the chicken cooked through.