How I made a meal of decluttering my fridge 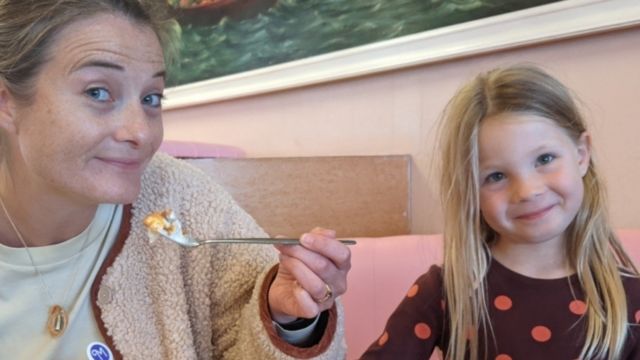 As a staunch believer in the fragility of global supply chains, I like to stock up. I cushioned the claustrophobic stasis of early lockdown, like so many others, by stacking my cupboards - in March 2020, British consumers stockpiled food worth £1bn over three weeks. My shelves were filled with rows of tinned tomatoes and pulses, an A-Z of pasta shapes and 1kg tubs of peanut butter. This wasn’t hoarding, it was pragmatism.

But by the time the great petrol shortage of autumn 2021 came around, when many others were panic-buying thousands of pounds worth of festive food, my cupboards were almost bare. Because instead of buying up the corner shop or using the last drops in my tank to buy a turkey and a tower of mince pies, I revelled in the luxury of travelling in the opposite direction - I was on a mission to use up what was already there.

My incentive for eating my way through my cupboards, fridge and freezer was a temporary house move. I couldn’t just chuck the lot as I can’t bear waste, so I decided to make the packing and unpacking easier by using it all up.

The early days were fun. I would gather lonely sausages from the freezer to serve as part of a sort of lucky dip buffet (immediate family only). Everything tasted better when simmered with slices from the colossal jar of preserved lemons I needed to eliminate.

There was enjoyment in moving steadily through the freezer until one shelf and then another was empty. There were no strict rules. I would - obviously - buy fresh food and anything I really wanted. And within the daily challenge nestled a strike of satisfaction akin to that felt by Wordle users worldwide.

As my cupboards and containers emptied, I confess to a significant helping of smugness. The petrol crisis didn’t worry me - safe in the knowledge that I could go two weeks without setting foot in a supermarket. There were pricks of delight each time a lurking tin was emptied and eaten.

But a week before the move, Covid blighted my progress. I had bought food for a week’s family holiday for 14, now cancelled. Six loaves of sourdough and a brisket large enough to feed the 5,000 were added to my stockpile. My freezer was full again.

Very soon, the initial using-up plan evolved. This was no longer just about practicality but was becoming a matter of principle bordering on the fanatical, a quest to throw firecrackers at modern life’s lurching merry-go-round of save-splurge-hoard-repeat.

Throughout the past six years, I have overstocked cupboards and attended to stoves not out of joy but out of necessity, feeding a family instead of my own desires. I had turned into a person who sees breadcrumbed freezer products, quick-cook penne and individually wrapped miniature cheeses as indispensable. I heard in myself my mother’s voice extolling the joys of an extra chest freezer. The only thing now separating me from that prosaic thrill, I realised, was lack of space.

Now I wished for a return to a life lived more lightly. I could no longer bear the weight of 17 half-eaten jars of condiments in the fridge.

Even the queen of decluttering, Marie Kondo, struggles to manage her fridge, she revealed late last year, telling Homes & Gardens magazine that the fridge is tricky to keep tidy because we use it so frequently. One of her tips is to know how much food you already have, which in my case would be like committing the electoral register to memory.

But if decluttering is the counter behaviour to hoarding, can it also become problematic, compulsive even? It can. Though I sense I’m not there yet: I remain a person who knows there is space in the world for many hundreds of chilli sauces.

Gradually, though, I began to find my clan. On Instagram, I noticed people committing not to a January diet, but a sort of consumer cleanse, a purge of the constant need to buy more. Food and drink writer Fiona Beckett tagged her project #givingupstockingup, explaining that “it had got to a stage where I couldn’t squeeze anything else into the freezer and the store cupboard was overstocked too, largely because I’d got into the habit of putting the same things into an online delivery during the pandemic, ‘just in case’”.

I began to realise my cupboard scouring was creating more time in my life. Meals were more spontaneous, I didn’t waste time during the day wondering what to make or dashing to a shop last-minute. And we didn’t suffer for my madness, or eat poorly. Tins, pickles and preserves are full of tangy treats to brighten monochrome wintry dishes. Think green olives, pickled ginger, frozen cranberries, preserved lemons.

As much fun as can be had pairing dried legumes with out-ofdate spices, the party really started when we began to work out how to get through an oversupply of crème de violette and other treasured finds from a past life exploring French hypermarchés.

Despite the ascetic lengths I found myself journeying to, there is no need to empty all of your kitchen cupboards. The idea is simply not to immediately restock every item, saving money and time, shaking up your weekly menu.

“Although I set myself the challenge during February, the mindset has carried over,” says Beckett. “It’s also encouraged me to cook more from scratch and be more creative about it.”

My experience has not been without its setbacks. It is possible to eat risotto too often. My husband refuses to eat or throw the can of mock duck he once bought. Worst of all, I began to sort through other people’s cupboards. Don’t ever do this.