How to be a lazy vegan

Signed up for a meat-free month but can’t cook? Or fancy eating more plant-based meals without the effort? Sophie Morris on the convenience foods to try 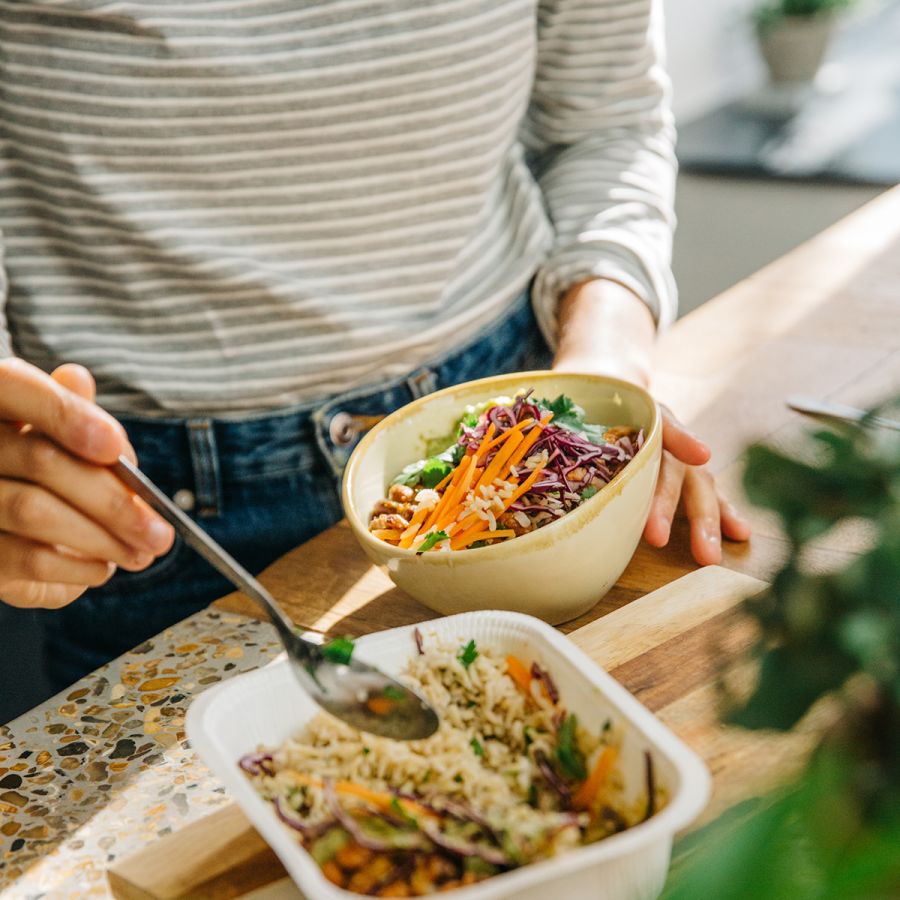 Hands up who wants to be a vegan but can’t be bothered? It’s tough, isn’t it, the idea of standing in the kitchen chopping veg and soaking pulses when the time of year calls for Netflix binges with a side of comfort food? There are as many reasons to become a vegan (the environment, your own health, animal cruelty) as there are to avoid it (love meat, can’t be bothered, my friends might dump me), but more than anything I want to spend as little time preparing food in January as possible.

I decided to kick off some vegan exploration in the laziest possible way, with a delivery from allplants, a vegan meal service dropping off frozen ready meals all over the UK.

Its menu includes shepherd’s pie and moussaka alongside Fiery Jerk Jackfruit, Hearty Roots Stew and Smoky Soul Chilli, which cost from £4.99 a portion (the price includes delivery but you have to order a box of six).

Allplants, like the number of us eating animal product-free food, has grown rapidly over the past few years. All I have to do to join the club is pierce the film and wait for my frozen BBQ Burrito Bowl made with caramelised jackfruit to heat through. Jackfruit? It’s the veg lover’s answer to pulled pork - though while it has the look and texture of meat, it doesn’t taste like it, so the tropical fruit is often flavoured with intense umami ingredients to replicate the taste of slow-cooked pig. “Lots of people love it,” says allplants co-founder Alex Petrides, “but you really have to season jackfruit to high heaven to make it taste of anything.”

Can we assume numbers have soared over the past three years? While eating an exclusively vegan diet remains a relatively niche way of life, according to Waitrose a third of us say we are “flexitarians” (i.e. a mostly vegetarian diet), while Kantar Worldpanel found that a quarter of UK dinners contain no meat or fish. Deliveroo’s orders of vegan meals increased by 203 per cent from 2017 to 2018.

Easy approaches to veganism are booming this year, with everyone from major retailers to local cafés adding convenience foods or quick lunch-time options for the meat-and-dairy-free.

M&S launched its Plant Kitchen range last week with 60 dishes including “dirty vegan” comfort food like cauliflower popcorn, “No Chic’n” nuggets and sourdough pizzas. Tesco doubled its Wicked Kitchen range to 46 dishes, adding on-the-go items like Tex-Mex Salad Bowls, sausage rolls and some puddings. Waitrose has introduced “fishless fingers” made with breaded seaweed tofu and a vegan tartar sauce, while Aldi, Sainsbury’s and Ocado have also expanded their plant-based products. High street stalwarts Pret A Manger, Yo! Sushi and Wagamama are all pushing vegan options, and last weekend chef Gizzi Erskine opened Filth, a plant-based pop-up burger joint in Shoreditch. Even better, she opened it in the site formerly occupied by Dirty Burger, Soho House’s pit stop for the sloppiest, meat-juicesdown-the-chin grilled beef patties out there. And of course, dedicated Veganuarists can now pop into Gregg’s for its vegan sausage roll (if there are any left after the rush last week), or even to McDonald’s, thanks to its new vegan-friendly wrap.

Vegan meals to your door Allplants founders, brothers Jonathan and Alex Petrides, launched the company a few years ago, soon after switching to veganism themselves, and began by testing out recipes at supper clubs and selling frozen portions to take home.

It was the first vegan delivery kitchen, and it has now delivered half a million meals to 15,000 customers. Investors include the founders of Lola’s Cupcakes, Bulb, Lily’s Kitchen and Propercorn, and before Christmas it won £7.5m in investment, so expect to hear more about it. Alex, the younger brother at 28, tells me their client base doesn’t support the idea that veganism is a millennial, metropolitan fad.

The people he talks to often want to try eating a vegan diet, but don’t know how to make plant-free meals nutritionally sound, or perhaps they’ve had a go and didn’t feel great because they didn’t replace the protein and animal fats with worthy substitutes. I know about balanced nutrition, I just want someone else to do the work for me. Other part-time or wannabe vegans are desperate for meat replacements, a field that’s been slow to develop in the UK compared to the US.

Alex confesses that he loves cheese, and even occasionally has some, as it’s so hard to fake.

“Cheese is the biggest challenge. We’ve got some great dishes -like the cashew mac and our carbonara - that overcome this, but on a day-to-day basis the challenges of being tempted by these things are there.

“We haven’t really experimented with fake meats, we’re more about whole foods. Our bolognese is made from walnuts, carrots, courgettes and lentils. All these ingredients create the chewiness and the bite, and it looks and smells exactly as you’d expect.”

I try the bolognese and it does tick most of the boxes - even the kitchen smells like I’ve been simmering a ragu. Creating a ready meal that has the look and crunch of home cooking is a challenge, and I’m impressed by the al dente appeal of the dishes I try.

Meat-free (but not healthy) It’s a boon for veganism that avoiding animal products doesn’t mean #cleaneating, or even healthy eating, but a shame for me because I eat two thirds of the pot of M&S vegan coleslaw (the first on the high street, and there’s a potato salad too) while I wait for its soya-based no-beef burger to cook. It’s a decent burger. If you gave a meat-loving friend a beer and then one of these dressed in the slaw I doubt they’d question it, but I enjoy the beet burger just as much, anion, especially if you’ve got a coleslaw habit. My toddler, who doesn’t like chicken, happily eats the nuggets and the cauliflower popcorn.

“This is the year we’ll truly see plant-based food go mainstream,” says April Preston, head of product development at M&S, which is launching Plant Kitchen after discovering 60 per cent of its customers are eating less red meat and more vegan food.

Tesco launched its Wicked Kitchen range last January, and when it saw how well sales were doing, it doubled the size of the range for 2019. Its curried cauli pasty has a great spice to it and the pastry feels buttery if not very flaky, but decent for a ready-made product. However, my favourite of all the products is the toasted three-onion dip. It contains something called “soya drink”, a blend of soya beans, water, preservative and some vitamins plus faba bean protein but I doubt I’d distinguish it from a dairybased dip in a taste test.

If your major push towards veganism is for environmental reasons then you’re going to find convenience food problematic.

As much as producers scramble to reduce, re-use and recycle waste, there’s still plenty of it. Alex points out that the energy used cooking large batches of food in a central kitchen is energy-efficient. All the allplants packaging is recyclable and compostable and they ask customers to return it - 45 per cent do so. At M&S, these new dishes are the first ready meals not served in black plastic trays.

I find the term flexitarian disingenuous. You’re not a part-time vegan because you eat vegetables as well as bacon.

Getting to choose when and what you eat makes you lucky, not special. But I’m 100 per cent behind this flexible approach to cooking vegan food, and the opportunities it offers for a slow, gentle, cruelty-free and lazy start to the year.

The allplants way to making vegan meals exciting and fun STILL MAKE YOUR FAVOURITES There’s a hack to every recipe. I’ve always loved a rich bolognese sauce to top a bowl of spaghetti. When making an allplants ragu, remember the flavour is all in the sauce, so use your favourite recipe, swapping the meat for a blend of 50 per cent walnuts, 25 per cent carrot, 25 per cent courgette. This simple tweak will give a delicious, blend of crunch and chew, while delivering way beyond your protein needs.

EXPERIMENT There are 400,000 plant species and probably about eight meat or fish varieties you regularly eat. Put aside your meat and two veg for endless, limitless experimentation. Our best dishes use ingredients such as kimchi, jackfruit and bamboo!

USE NOOCH Nooch, AKA nutritional yeast, is an all natural way of bringing nutty, cheesy savoury flavour to any sauce, soup or salad. A little goes a long way, so don’t overdo it when adding your first sprinkles. It’s also loaded with vitamin B12.

DON’T SACRIFICE CREAMINESS Making a creamy sauce from all plants is easy. Grab your Nutribullet. Throw in two cups of cashews, one cup of water, then juice of half a lemon, two cloves of garlic, a sprinkle of salt and whizz. If you have some nooch handy, add two BUY A MAGIMIX From cakes to sauces, your life will be made faster and easier if you own a Magimix. That’s just science.