I tried eating insects - and I’ve caught the bug

Mealworms and crickets could one day be on sale in Aldi. How do they taste? By Sophie Morris 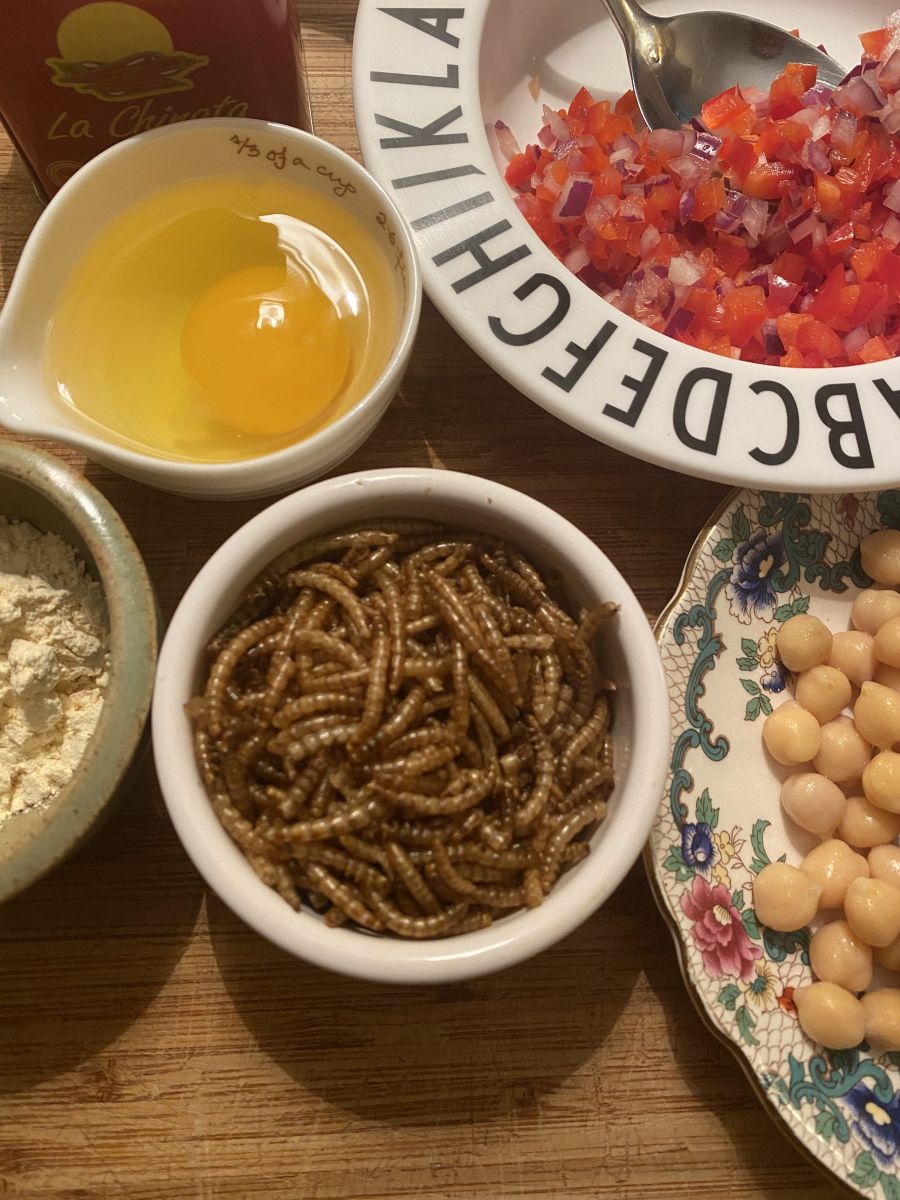 Mealworms can be ground up into a burger

Two days into my new diet plan and I am already filled with dread. Not because the regime is restrictive or I have cravings for fast food. In fact, burgers are on the menu. But these are an unusual kind of burger, made with dried mealworms. This dish might offer twice the protein content of a regular beef patty, but I’ve got a creeping feeling it’s not going to taste like a nice, sloppy double cheeseburger.

I’m exploring the possibilities of eating and cooking with insects. Edible bugs are hailed both as a superfood and a saviour of the planet by everyone from the UN to top chefs. Even Aldi has now considered stocking them: last week it launched its own Dragons’ Den-style TV series on Channel 4, Aldi’s Next Big Thing, which featured cricket-based meal kits for tacos, nuggets and burgers as a cheap and sustainable source of protein.

My stomach isn’t turned inside out by the idea of crunching on a locust or adding mealworms to my noodles. I’ve eaten ants and deep-fried grasshoppers before and enjoyed both. But my appetite isn’t turned on by the idea either. When I told my six-year-old daughter about the insects, she said there was no way she was going to eat any but, when I showed her a handful of the mealworms, she grinned, grabbed one, and declared it “delicious”. She then took a handful, studied it, and screwed up her face. Once she’s thought about what the food is, she decides she can’t stomach it.

The market for edible insects, in the Western world at least, exploded a decade ago when the UN anointed them the future of food and solution to world hunger. Big business and entrepreneurs rushed for a slice of this new market. Chef René Redzepi, of the three-Michelin-starred restaurant Noma in Denmark, served ants at Claridge’s at an event costing £195 a seat. The fact that two billion people are already eating insects is proof they are palatable. But consumer disgust at the thought of crunching down on a cricket has made them a tricky sell to the average eater in Europe and North America.

Tiziana Di Costanzo and her family, who live in west London, have always been interested in sustainability. She first tried insects on work trips in Thailand and liked the taste, from fried crickets to silkworms, which she describes as “kind of cheesy”. When her 14-year-old son was looking for a skill to learn for his Duke of Edinburgh award, they thought it would be fun to try farming insects, and he began in their utility room. They fell in love with entomophagy - the practice of eating insects - and the hobby evolved into a business, Horizon Edible Insects.

“Our concept was urban farming, where you grow insects in the city where they are distributed, using local food surplus as feed,” Di Costanzo explains. “You can stack insects and produce a lot in a very small space.”

They built a farm in their garden shed and began to share their knowledge with cookery classes.

Both her son and daughter have always been happy to eat insects,

Di Costanzo says. She makes pizza about once a week, grinding insects into the flour. At classes, guests might make bruschetta with a cricket garnish, curry and coriander insect fritters, crispy chocolate mealworm cupcakes and cinnamon and raisin insect biscuits.

Her husband is a fan of sprinkling them on his breakfast so I try adding a few mealworms and whole crickets to my porridge instead of my usual nuts, seeds and tahini.

The mealworms have crunch and a warm, nutty taste. The crickets take a few chews to get through. Overall, it’s not that I dislike the experience, but I really do enjoy my nuts and seeds and tahini, so it seems a shame to swap them for something else.

I want to love the crickets, with their silky skins, their soft insides, their 62.5g of protein per 100g, and nine essential amino acids. But they’re so worthy, I’m finding it difficult to get excited about them. My problem is that I want to enjoy what I am eating for what it is. I’m not a fan of hiding healthy foods in meals by blitzing them to an indiscernible powder or cloaking them in seasoning.

But when I get started with recipes from Horizon Edible Insects, it gets more interesting and rewarding. A cricket “guacamole” is topped with crickets soaked in balsamic vinegar. They taste overwhelmingly of the balsamic and don’t speak to me of guacamole, but they’re tangy and moreish. For a burger, I grind up mealworms and mix them with chickpeas, pepper, red onion, egg and chickpea flour. It looks appetising and has an unusual, umami taste, earthy but light. I’ll make these again.

Though not vegetarian, for anyone eating a plant-based diet out of environmental concern, insects pack a protein punch without the planetary fallout. If a family of four switched meat for an insect protein meal once a week, they could save the use of 650,000 litres of water a year. Insects can contain up to three times the protein of meat, as well as many other vitamins and minerals - more iron than spinach and more calcium than milk - and can be fed on waste food.

They definitely work as an easy add-on to a plant-based diet. You can mix them into almost any dish, whether it’s a pasta sauce, soup, pie or salad, to ramp up its protein and nutrient content and add some texture and savoury flavour.

Why aren’t we all already eating them? As well as the gag factor, cost makes them a tricky sell for large and low-cost retailers. Horizon Edible Insects has crickets at £37 a kilo, although you use a very small amount in most dishes, perhaps 10g to 20g a head. There are many small companies like Horizon starting out in this sector. Yum Bug, the organisation on the Aldi television programme, won’t make it onto supermarket shelves this year - Aldi decided it isn’t ready. The supermarket’s head of buying, who tasted the cricket kits, told them to come back in five years.

Horizon Edible Insects already has 300 people on its waiting list for cookery classes, which it will restart at the end of this month.

Demand has never worried Di Costanzo. Regulatory barriers are the problem. Back in 2013, when the UN announced the possibilities of eating insects, it provided the catalyst for huge growth - according to Barclays, the sector will be worth $6.3bn (£5.5bn) by 2030. Brexit, however, has thrown the industry into turmoil. The UK’s Food Standards Agency (FSA) decided that edible insects could not be sold here after the Brexit transition period ended at the end of 2020, despite the fact they had been accepted as a “novel food” in the EU.

Small businesses like Di Costanzo’s, which were enjoying high demand and about to turn a profit, were left in limbo. They campaigned to overturn the ruling, only to run into another obstacle. Since 30 June of this year, the FSA has accepted the EU approach, but requires all UK insect vendors to complete their own novel food applications in order to be reauthorised here. While the application is free, the testing is very costly. Di Costanzo puts the price of gathering the scientific data at £100,000. Each product requires its own application. If you wanted to sell dried mealworms but also flour, fritters, lollipops and cakes made from the same species, each product would need to go through the £100,000 application process.

From 2024, the industry will practically be closed to small businesses. What was proposed by the UN as a fair and sustainable way of producing protein is now set to be swallowed up by big business - exactly the sort of industrial agriculture that dominates meat production around the world, and has normalised the poor treatment of animals and sky-high emissions.

On a global scale we need to produce enough protein to nourish a population of 7.7 billion and counting. On a local and human scale, we need food to nourish hearts and souls. For me, that won’t be critter fritters on a nightly basis, but I will try out more recipes.