It’s not sugar-free or fat-free, but it’s vegan - and tasty

Can plant-based bakes keep up with traditional cakes and pastries? Sophie Morris discovers the clever swaps and surprising ingredients that work 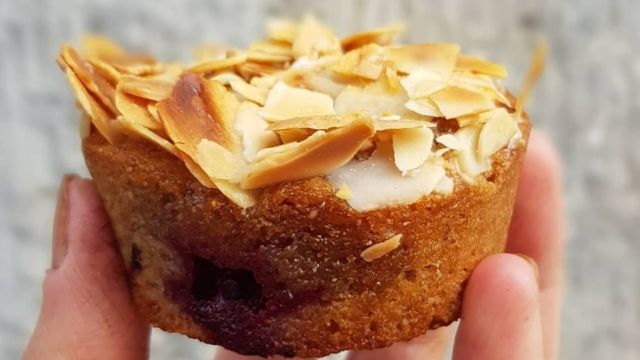 While The Great British Bake Off is drenched in camp comedy and kitchen nostalgia, it also likes to move with the times. This year, 19-year-old Freya Cox is the show’s first vegan contestant. And while vegans were celebrating her success in the technical challenge, in which her malt loaf came second in Paul and Prue’s blind tasting, she later revealed it wasn’t actually a vegan bake.

“I was desperate to show the world vegan baking is just as exciting with the hope to inspire people to give it a go,” she posted on Instagram. “For obvious reasons I wasn’t able to change the technical challenge as it would mean the whole show was unfair.”

Outside the strictly regulated arena of the Bake Off tent the vegan baking market is blooming. It’s easy to find a range of plant and nut milks in your corner shop or supermarket and the value of this sector is projected to reach more than £35bn by 2027. Breakthrough brands are capturing the online market while major food manufacturers are launching vegan versions of their products. Recipes, cookbooks, classes and online tutorials are booming.

It’s a decade since chef Bettina Campolucci Bordi (inset) began getting serious about plant-based baking, but the scene has changed rapidly. She began cooking on retreats at a time when the terms “plant-based” and “aquafaba” (chickpea water - blended, it’s an egg-white alternative) were not in common usage and it was hard to get ingredients so chefs usually experimented and made their own. She went to Los Angeles to learn from early adopter Matthew Kenney and now teaches aspiring plant-based chefs herself.

“Ten years ago I had to make everything from scratch,” she says.

Nonetheless, Bettina could tell there was a thirst for knowledge in this area and last month published her third cookbook, Celebrate: Plant-Based Recipes for Every Occasion.

FATS
Vegan spreads have improved and most big brands make at least one now. Most are similar to margarine and made from palm and vegetable oils. Eady Timms opened her café Root in Hythe, Kent, in 2020 after devising and delivering vegan meals in lockdown. Her favourite is Flora (great for pastry). The more traditional route is to use butters made from cashews or coconut oil, and Bettina mentions Naturli, which is made from shea butter, coconut and rapeseed oils.

Kate Langston and Sam Dennis opened Heyl Bakery, Plymouth’s first fully plant-based sourdough bakery, at the end of 2020. “When I first started vegan baking, I relied heavily on a handful of blogs, and struggled to find vegan options in shops and cafés,” says Kate.

They use Naturli, in everything from cookies to brioche. “We’ve been developing a vegan sourdough brioche,” she explains, “which isn’t the easiest thing to replicate given the amount of egg and butter in the original. We’ve got a pretty good recipe but we’re still working to improve it.”

Don’t expect these products to work as a straight substitute. “Although you can buy equivalents they’re never going to be exactly the same,” says Bettina. “I ‘veganise’ birthday cakes, pie cases and puff pastry, but there are different measurements and techniques.” Oils give a light result in cakes. If you’re using one with a strong flavour such as olive or coconut oil, make sure this is a flavour you want to taste in your finished cake - Bettina recommends odourless coconut oil or rapeseed.

DAIRY
Aquafaba is loved by vegan bakers because it behaves like egg whites in meringues and mousses. If you don’t want to produce your own, open a can or buy it in a carton from Oggs. There are also plenty of vegan milks, creams and yoghurts to experiment with, based on nuts such as coconuts, cashews and macadamias or oats and soy.

I was overjoyed to see a thick yellow custard in Celebrate.

Bettina’s secret? Shop-bought custard powder, which is vegan, made with any plant milk; choose coconut for a thick and rich custard, oat milk for something lighter, almond to bring its nutty flavour.

GETTING A RISE
This can be trickier in vegan bakes compared to those made using eggs. In her sponge and sprinkles and ultimate chocolate cakes, Bettina uses a combination of raising agents - self-raising flour, baking powder, aquafaba and apple cider vinegar. Using both baking powder and bicarbonate of soda is another trick.

DECORATING
Vegan baking isn’t all self-taught experimentation. Kimberly Lin has held roles in the UK’s top hotels, as executive pastry chef at The Corinthia and Claridges, and in innovative kitchens such as Dominique Ansel - famed for inventing the croissant-doughnut hybrid the cronut. She is now chef-patron of Lilly’s in 3 Henrietta Street, Covent Garden, and founder of Floozie Cookie.

“The most challenging part is finding creative garnishes for the cookies which are vegan and also easy to get in large quantity,” she explains. “A lot of sprinkles and edible cake decorations have beeswax or shellac on them. Some food colourings are derived from animal products. I double and triple check labels and ingredients even if they were vegan before. Sometimes manufacturers change the ingredients without notice.”

PASTRY
Even vegans can be on the lookout for pork pie and sausage roll substitutes. After a vegan pie took first prize in Melton Mowbray’s British Pie Awards in 2019, the 2021 event had the most entrants - 70 - into its vegan class. The success of Gregg’s vegan sausage roll is legendary, and last week it introduced a vegan bacon roll. You can easily make a rough puff with vegan butter, but choux pastry might trip up any vegans on GBBO.

INDULGENCE
“I think my least successful bakes are when I try to make something overly healthy,” admits Kimberly. “The combination of gluten free and vegan is much harder to nail,” agrees Bettina. “When you can use flour it’s a much easier swap. In my sprinkles cake I haven’t scrimped on anything, it’s not sugar-free or fat-free, it just happens to be plant-based.”

‘Celebrate: Plant-Based Recipes for Every Occasion’ by Bettina