The London-based chef has opened his clifftop villa in southern Spain to food-loving guests. 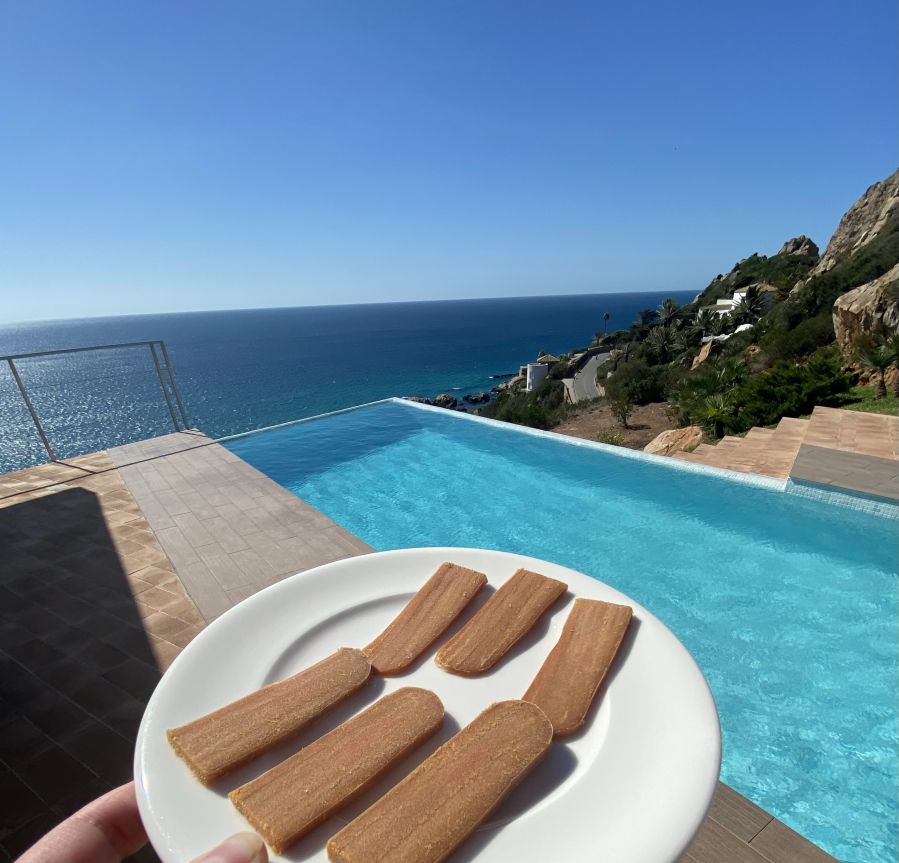 Our group of six are the only customers in the fish shop in Barbate, on the Costa de la Luz. The gleaming display cabinets and hushed atmosphere are a world away from the bustling market nearby, where we spent the morning watching shoppers fill baskets with fresh figs, almonds, mussels, clams, lobster and sea bass.

But there are some regional delicacies you can’t find at the market, hence our visit to Gadira, a shop on a small industrial estate. It is here that the limited quota of bluefin tuna - caught using traditional almadraba fixed nets - is processed. Although most is exported to Japan, this highly prized tuna is a big draw for this part of Andalucia. Bluefin, known as atún rojo because of its pinkish-red flesh, might weigh up to 250kg. Behind Gadira’s counters are tins and vacuum-packed portions of every inch of the fish, from belly and loin to liver, heart and roe.

This shop has more in common with a precious gem trader than a fishmonger, so we are lucky our guide and host, chef José Pizarro, is one of its best customers.

Pizarro - who was born in Extremadura - has lived in the UK since 1999 where he has six restaurants in and around London. He champions the best Spanish produce, from Cinco Jotas jamón ibérico to Reserva Catalina Cantabrian anchovies and Osborne sherry.

He picks up a couple of packets of the roe - hueva - as well as the mojama. And where better to try it than on the terrace of his new holiday home, Iris Zahara?

LOCATION Iris is in Zahara de Los Atunes, around 70km south of Cádiz on the rugged Costa de la Luz.

The closest airport is Gibraltar (served by British Airways from Heathrow from £39 one-way); the nearest train station is in Algeciras (served from Madrid).

ACCOMMODATION Iris Zahara, which Pizarro bought with his partner Peter and opened to guests earlier this year, is a contemporary villa designed by Alfonso Alzugaray, one of Spain’s foremost architects.

It is plugged into cliffs in the neighbourhood of Atlanterra, just outside Zahara de Los Atunes, a pretty town with seemingly endless stretches of white sand that are a magnet for Spain’s beautiful people, from politicians to playboys. The house and beach below were used as stand-ins for Mustique in The Crown.

FOOD AND DRINK Breakfast showcases local produce - fruit, cheese, ham - as well as fresh bread and tortillas, and guests can also request lunch or dinner (for a supplement).

We pursue our tuna education at a restaurant in Barbate, El Campero, kicking off with a tostada of diced belly showered with truffle. A tuna rib is as meaty as its porcine cousin, and a huge ribeye is portioned so each diner can try the loin, sirloin and belly.

WHAT TO DO The team at Iris can book restaurants, tastings and tours in the area. We drive up to the white hill town of Vejer de la Frontera and gaze down at olive and orange groves, before returning for a horse ride along the sand.

There are swims and sunsets, both from the infinity pool (below) and the beach below.

WORTH WRITING HOME ABOUT Pizarro and Peter also host small parties at the villa. They might arrange visits to Jerez for sherry or Jabugo for ham, visit Seville and spend time cooking together. However, this is one for a special occasion, starting at €6,000 (£5,165) per couple.