Gizzi Erskine is a slow-food advocate, pizza peddler, trendspotter and trained chef who likes having her fingers in a lot of pies, she tells Sophie Morris 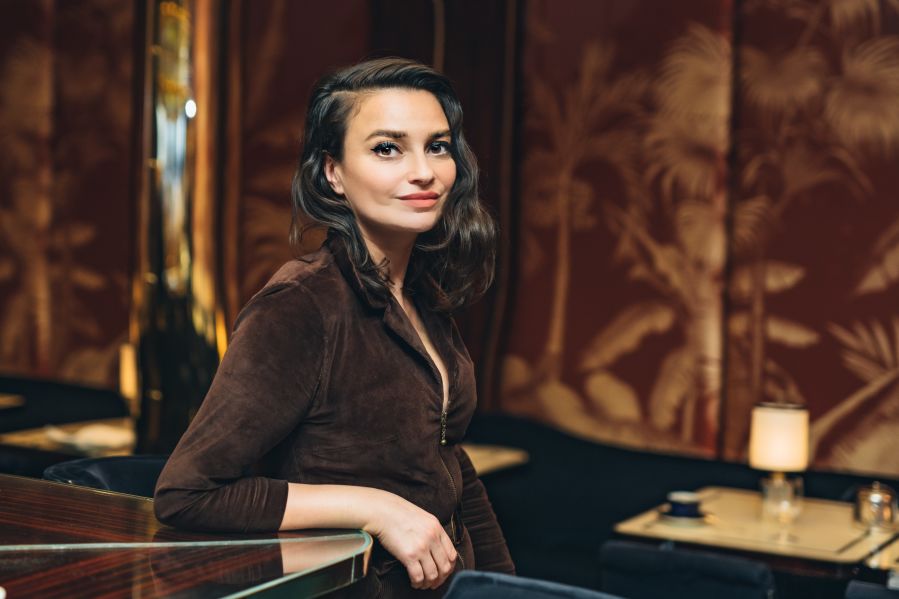 “I’m on the constant hustle,” says the chef Gizzi Erskine, who publishes her seventh cookbook today. “I’m at my best when I’ve got issues to deal with. I can keep lots of plates spinning.”

A veteran of the pop-up restaurant scene, Erskine has a talent for spotting trends and setting up new ventures and is fresh from selling 15,000 pizzas with her friend, Professor Green. “We speak about 20 times a day,” she says of the rapper . “A lot of people want us to get together but I’m very maternal towards him and he hangs out with my family. We get things done. I’m more manic and he’s quite chill.”

If you followed Giz ‘n’ Green’s fastfood adventures during lockdown, you might be surprised to learn there are recipes in the new book, Restore, which are the opposite of the pair’s “Monday Night Fakeaway” versions of Domino’s pizzas, Big Macs and Nando’s. The fish sauce and white miso in Restore won’t be ready until six months after you start them.

Yet these apparent contradictions are all part of her approach to cooking - Erskine’s professional life is anything but linear.

She explains that she has attention deficit hyperactivity disorder (ADHD), which was diagnosed when she was in her thirties (she is now 41 ) which, she only realised later, manifested at school. She grew up in London and worked as a body piercer in her teens before switching to the kitchen. Her parents divorced when she was young, and she and her sisters were raised by her mother. Her father died as she was starting her GCSE exams, and she left school with no qualifications. Yet she was top of her class at Leiths School of Food and Wine and trained in the kitchens of top restaurants.

Last year, she ran a plant-based burger pop-up called Filth Foods, but her last book was called Slow: Food Worth Taking Time Over. She butchered a whole goat in her first days at London’s St John, the restaurant famous for nose to tail cooking, has “food and sex” as well as “soil activist” in her Instagram profile and has modelled for Agent Provocateur. This year, she also stepped out of the food world to launch a hit Spotify podcast, Sex, Lies & DM Slides, an investigation of the mindboggling landscape of sex in the era of social media and peopled with famous friends including Lily Allen, Ruby Wax and Rose McGowan. It’s the funniest thing I have listened to all year, but I must warn you that the content is not family-friendly.

She began her TV career in 2007 on the Channel 4 show Cook Yourself Thin, a title that probably would not be acceptable now. The diet industry hasn’t shrunk, but perceptions of it have changed, and thin is a loaded word. Erskine, who is open about her experiences with dieting, says that the name was more brittle than the concept, which gave practical advice on dropping a dress size to people with bad eating habits. Nevertheless, “I hated it,” she says. “It was probably my worst TV experience of all of them. They put four women together like we were the Spice Girls and hoped we’d get on.” She was fired from the show, though it was later brought back with her as the sole presenter. “People wanted me to do things I didn’t want to do, and I said no.”

The title of her new book, Restore, seems particularly welcome after the past year, and its pages are full of ideas for soothing and revitalising food.

First I make the “Really Great Lamb Neck Stew” with the tonguein-cheek subtitle “lots of flavour but no identity” because it’s mostly an Irish stew but with some tweaks such as browning the meat - and she is respecting its cultural heritage. This restores me for three days, then I’m on to the deliciously smoky “Black Lentil and Beetroot Larb”, a take on the Thai dish made with minced pork, and the “Parsnip, Miso, Oat and Shallot Boulangère”, which is as comforting as any dauphinois or cauliflower cheese.

And if someone could please make me the “Sourdough Doughnuts with White Chocolate Custard and Sour Cherry Jam”, I think I’ll be fully restored.

Erskine has so many pots on the boil that I hope she is taking her own medicine. She launched her first West End venue in February, a popup called The Nitery at the St Martin’s Lane hotel in Covent Garden.

“I think we all thought it was going to be a permanent restaurant,” she says. “It launched with such a bang, but suddenly my ego started getting a bit bruised as we weren’t full to the brim.” At the end of March, the weekend after restaurants closed their doors for three months, she received a glowing review in The Times from Giles Coren. “So I’ve ticked that box,” she says happily.

Within two weeks of closing, she was reaching millions via her Instagram Live videos with Green. The following month she had a new book deal. Last week, she and Green announced a festive meal-delivery kit collaboration with Grey Goose vodka, available every “Friendsmas Friday” until Christmas, and all profits go to the charity Hospitality Action. It would be easy to think that she simply jumps from food trend to food trend, but there is real substance to her decisions and her work.

It was at St John, when she was 23, that she developed her knowledge of the food ethics that drive her work and are evident in Restore. I joke that she probably never expected to introduce a book with a discourse on trade deals - she writes of her fears for the future of UK farming and distancing from the EU, saying it has made her re-evaluate her use of imported ingredients. She replies that she did, actually, that this sort of thing has always mattered to her. She isn’t shy about her mistakes and owns up to the fact that biodynamic farming might not be everyone’s priority in 2020. “I wince at conversations I’ve had at parties because my principles, at face value, might not seem so important right now. Slow was written with idealistic intentions and I’d not taken into account the practical side of things, the social economics and the way most people shop and eat.”

During lockdown, Erskine spent time with her neighbours in east London, where they set up a covered seating area for communal but distanced eating and socialising. These are probably the sort of demographic who bought one of her sustainable plant-based burgers.

Yet in Restore, Erskine condemns the holy trinity of contemporary conscious eating - avocado, coconut and soy. The obsession with eating these products, often by vegans who have cut out animal products for environmental reasons but who have failed to look into how their replacements are produced, is putting stress on labour, land use and human rights where they are grown.

“I fully accept that the meat and dairy industry is problematic, but I don’t accept that this black-andwhite approach is necessarily the way forward,” she writes. “Prominent films such as What the Health and Gamechangers, which suggest that veganism is the only way to save the planet, are extremely misleading and one-sided.”

A lot of soy production is for animal feed not tofu burgers, but Erskine prescribes a break with the monoculture farming that is killing our soil, naming Monsanto, Unilever and Carrefour as “equivalent to oil barons” for monopolising soy agribusiness.

She also argues there is a direct link between Covid and intensive farming. “The reason we’re experiencing a pandemic,” she claims, “is a direct result of the extensive deforestation of the world’s rainforests to create more land for agriculture, which is putting people and livestock in closer and closer contact with wildlife and their otherwise harmless and dormant viruses: consumption of bushmeat such an pangolin and bats has been confirmed as the likely source of transmission.”

Somehow she has taken what she’s calling “a down-to-earth guide for shopping, eating and cooking now” and married it with Brexit, fossil fuels, fresh-water melts and monoculture agriculture. I don’t agree with her statement that real change needs to come from the consumer because most people don’t have the sort of choice or access to the good food that Restore promotes. Big Food has made sure of that.

But Erskine shows that fast food can be ethical and fine dining can be filthy, which is a fresh approach to eating and cooking.

My good friend Neil Rankin, who is perhaps known primarily as a meat chef, hates that reputation as deep down he is a plant-loving teddy bear. It’s always interesting to look at his Instagram for plant-based food ideas - as a meat lover he’s always pushing boundaries for how he thinks about cooking with plants, and he is the one who gave me the idea for this.

Larb is a northern Thai dish, normally made with pork, where rice is roasted and ground for a delicious crunch. The most intense version is actually made of pig’s blood, so the beetroot provides an irony backbone (not to mention the colour). This is just a very clever, yet simple salad.

Place the beetroots on a baking tray or roasting tray and roast in the oven for 1 hour 20 minutes until softened. Remove from the oven and leave until cool enough to handle. The skins should peel away very easily. Chop each beetroot into small cubes and set aside.

Heat a dry frying pan or wok over a high heat. Once hot, add the rice and toast for a few minutes, until the grains begin to turn vaguely golden. Treat the rice like toasting sesame seeds, and be sure to keep it moving around the pan to prevent it burning. Transfer to a food processor and blitz to a coarse powder.

To make the crispy shallots, heat the oil in a frying pan over a low heat and fry the shallots for 10 to 15 minutes, or until they start to crisp up and turn a light golden colour. Scoop out the shallots with a slotted spoon and drain on kitchen paper to absorb any excess oil.

To make the dressing, mix together the lime leaves, lime juice, fish sauce or soy sauce, chilli powder, sugar and oil until well combined. Mix the beetroot, sliced fresh shallots, lentils and ground rice in a bowl with the dressing and leave to macerate for about 30 minutes.

Once ready to serve, combine the beetroot and lentil mixture with all of the herbs. Top with the crispy shallots and serve immediately.

Taken from ‘Restore’ by Gizzi Erskine, with photography by Issy Croker