It’s a fruitful time to munch a mango

There are 400 different varieties , but it’s the sweet and juicy alphonso mango that fans go wild for - and the season starts now, says Sophie Morris 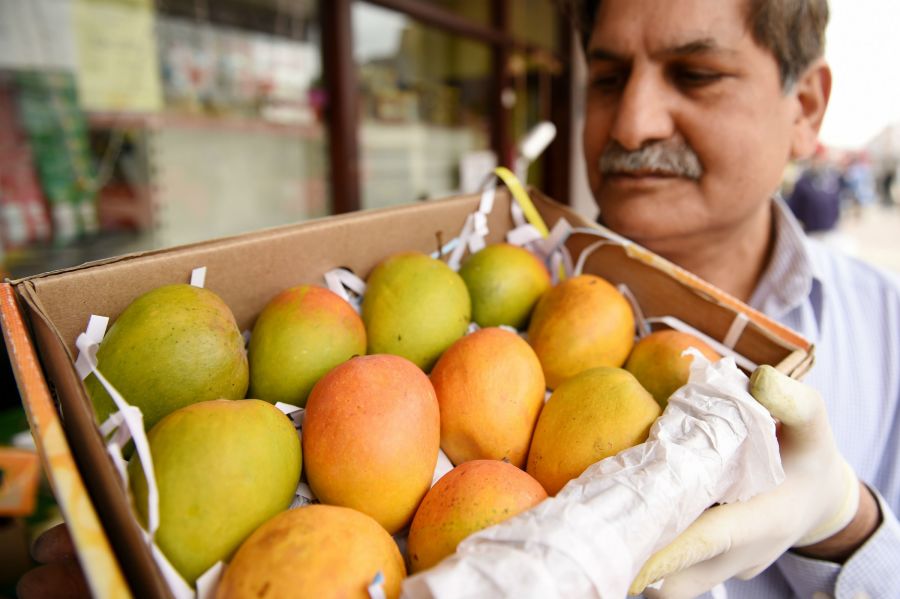 
Fresh mango is always a treat. It’s expensive, hard to come by and tricky to eat without smearing hands, chin, and possibly one’s décolletage with its sticky juice. And despite our country’s changing climate, our wonder at the evolution of English wines and the fact that tea, chillies and wasabi are all now growing in the UK, it’s unlikely you’ll ever get mangoes to flourish in your garden. It took experienced horticulturalists at Kew Gardens 20 years to get a mango tree to bear fruit, and that was in the steamy environs of the Palm House.

There are around 400 varieties of mango, and at this time of year India goes crazy for its favourite, the revered alphonso mango, a sweet and small fruit sold by the crate from late April for a few months. When imports of the alphonso were banned in 2014 for seven months, because of a pest it was thought might damage European crops, Indian farmers and UK sellers suffered greatly.

In India the season, which might run for six or eight weeks, is considered a festival, and people buy, eat and cook as many as they can, while trading intelligence daily on price and availability. Jamavar, a Michelin-starred Indian restaurant in London, will treat alphonso mangoes with the same respect they receive in India this month, and is offering a special menu throughout May.

“Alphonso mangoes are a national obsession in India at this time of year. They’re seen as a sign of love and respect and during the season, are often sent as gifts to friends and family,” explains Samyukta Nair, Jamavar’s co-founder.

“There are many different types of mangoes in India, but alphonso mangoes are known to be the best in quality due to their sweetness and richness of flavour. They are only available at their best when they’re in season, which makes them even more special.”

Chef and culinary director Surender Mohan has designed some special mango dishes for the month-long festivities. Chandni chowk ki aloo tikki is a pan-seared potato patty served with yoghurt, white radish, tamarind chutney and a raw mango mint chutney - with the raw mango adding some sourness to the dish.

Desserts include a mango and cardamom tart and a mango cheesecake, as well as mangococktails and a mango and ginger lassi. “Known as the ‘king of mangoes’, the alphonso provides a sweet, soothing flavour to follow spicy food, and the perfect palate-cleanser to round off a dinner,” Mohan says.

You’re unlikely to find alphonso mangoes in a supermarket, unless they’re in an ice cream. Most go to Indian shopkeepers around the country, and supply is irregular and quality variable, which adds to the desirability of the best specimens.

The alphonso season is special, but India loves its mangoes so much it doesn’t let many of them escape overseas, so we import different mangoes from many countries. Reportedly around 16 million a year, worth £6m, come here from Brazil, Ecuador, Thailand, South Africa, Spain and other countries.

Marks and Spencer has been selling whole mangoes for 20 years, but Britain’s relationship with the fruit is as old as its relationship with India. The 1904 cookbook What and How by ES Poynter includes recipes with mango for jams and “chutnees” and though it was aimed at British people living in India, it became popular in the UK as well.

Overall, according to market researcher Mintel, the chutneys, pickles and relishes market has suffered in the past few decades, as we turn to eating more fresh fruit and vegetables over pickled and canned products. Mango chutney, however, has remained popular, as new generations are introduced to it smeared on a poppadom in a restaurant . If you don’t live near any shops that sell alphonso mangoes, you can still try by buying a can of the pulp from online retailers such as Ocado. It’s not quite the same as peeling it yourself and dripping the juice all over your clothes, but it’ll make a delicious lassi, kulfi or cocktail.

MANGO LASSI By Surender Mohan
“A mango lassi is probably the easiest way to use the alphonso mango,” says Jamavar’s Surender Mohan, “and is a really simple and refreshing drink to make at home.”

We only eat a few varieties of mango in the UK.

M&S sells what it describes as “standard” and “speciality” mangoes. While the standard Kent and Keitt varieties come from many countries, the speciality fruits vary each year and are more fragrant.

In India, there are 283 varieties of mangoes, of which 30 are well known, but primarily people tend to use alphonso and payri.

The best way to cut a mango is vertically, about a quarter of an inch from the centre on each side of the fruit.

Serious Eats recommends peeling with a very sharp Y-shaped peeler and then slicing the fruit lengthways around the seed.