My doughs and don’ts

As the judge of a new series of ‘Best Home Cook’, the chef tells Sophie Morris about sharing a screen with the ‘legend’ that is Mary Berry 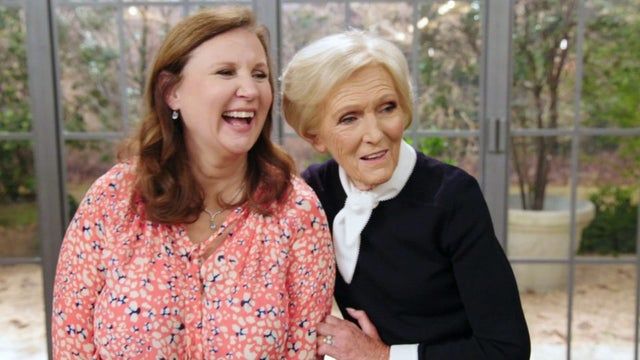 The clock is ticking. Ten home cooks begin the first challenge in their bid for the title of Britain’s Best Home Cook. Angela Hartnett, Michelin-starred chef, patrols the room. She asks Oli, a restaurant manager from Cheshire, why he’s rolling his pasta out with a rolling pin instead of using a pasta machine, as all the others are. He says that he likes to do things the authentic way. Angela’s response is swift and certain. She tells him an Italian Nonna would have used a machine.

Even though Mary Berry has set tonight’s task, the first challenge of the new series of Best Home Cook, being asked to make pasta for one of Britain’s best Italian cooks sets a high standard for the 10 contestants.

Angela has been running professional kitchens for more than two decades, as a protégée of Gordon Ramsay and now as owner of the Murano and Café Murano group of Italian restaurants.

She grew up in a family of Italian chefs and this year, like every year, cooked for more than 20 friends and relatives on Christmas Day. “For me, home cooking is about family sitting around a table eating together, laughing and talking, with delicious, tasty and unfussy food. It’s about the people as much as the food.”

You might know her from MasterChef, Great British Menu and Saturday Kitchen. For 2020 she’s bringing her vast expertise and straight-shooting approach to the BBC’s answer to The Great British Bake Off, which was sold to Channel 4 in 2016.

The BBC managed to retain Mary in the negotiations, but the first series of Best Home Cook didn’t hit the mark with critics in 2018. Then co-presenter chef Dan Doherty left following a string of sexual harassment allegations from staff at his own restaurants. The new show is fronted, as before, by Claudia Winkleman, a sign that the BBC considers it a big hitter in the schedule, and “fruit and veg expert” Chris Bavin, a friendly and popular face from series one. Apart from cooking expertise, there seemed little to differentiate Chris and Dan in the first run, while Angela brings a knowledgeable and witty new character who delivers straightforward judgements. Angela says it was working with Mary that drew her to the opportunity. “She’s a legend, and great fun to work with.” Is she ever too nice to contestants? “I think she’s fair. I don’t think Mary plays any games. I think she is who she is.”

From the first few minutes, it feels like Angela might have been chosen as the mean judge, a blunt critic of the amateur hopefuls’ inevitable blunders. But as the programme develops through the three challenges, each led by one of the judges and judged by all, her empathetic, enthusiastic and honest style shines through. “You’ve got to remember these are home cooks, not professional chefs,” she says. “It is a competition, but it’s not a show where you want people to feel bad. You want them to feel inspired and go away and cook something themselves.”

After the limp first series, the BBC has ramped up the competitive element. I feel it’s working, and am every bit as engaged as I would be watching a series of - yes - Bake Off. Mary begins each episode with her “Ultimate” round, in which contestants produce something they’d cook for a special occasion tied to Mary’s brief. This is the one they can practice for days at home and often produces brave flavour combinations and precarious methods of presentation. The first week sees them making fresh egg pasta. Is this a good dish to get a feel for someone’s talents? “You have to understand how doughs work,” she says, “and a lot of people make pasta dishes for family meals. But it wasn’t sprung on them.”

The contestants bring forth an impressive range of pastas, including a squid ink tortellini from Elisabetta, an Italian who has lived in London for 30 years.

Angela pronounces a duck ragù lasagne her favourite; for this dish clever cook Suzie, an accountant from Northern Ireland, has sprinkled the top of her pasta with duck skin crackling.

Next comes Chris with his “Rustle Up” challenge, in which he chooses a hero ingredient, something British and seasonal, and contestants have an hour to turn it into a midweek dish. After this, two contestants are selected to take part in Angela’s “Eliminator”, cooking one of her recipes which the judges then taste blind before sending one unlucky cook home.

Her top tip to home cooks is to plan. “A lot of people would go head on into the Rustle Up challenge instead of working out what they’re going to make. When they did well, it was because they planned properly. If they got in a bit of a pickle I treated them like I would a chef in any of my kitchens, telling them to stop what they’re doing, take 30 seconds out, tidy up, and get their heads together.”

Another essential piece of advice is not to forget to schedule yourself into the event. “Less is more and keep it simple. Don’t go mad by doing too many things. You want to enjoy the meal.”